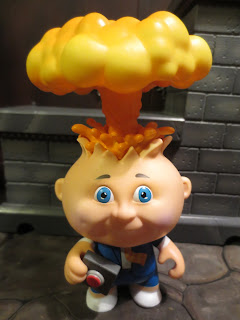 Yesterday I started looking at the first series of Garbage Pail Kids Really Big Mystery Minis and talked a little about the history of the property. Today I'm looking at another one of the figures who might just be the face of the property itself: Adam Bomb. When you think about the Garbage Pail Kids, you probably think about the image of Adam Bomb pushing the big red button of death with a mushroom cloud exploding from his head and his tie being blown aside. He's a perfect example of 1980s dark humor and quite possibly the most coveted figure from this line. Ready for a closer look? Then join me after the break... 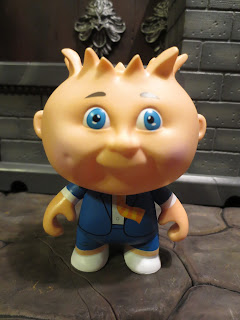 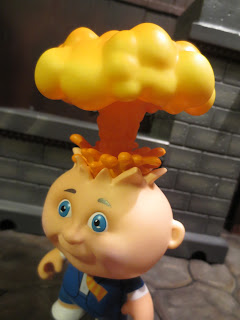 *The iconic explosion popping out of Adam Bomb's head looks fantastic! It's nicely sculpted and painted with a mixture of orange and yellow to give it some cool depth. The small flaming segments popping over the ruptured edges of Adam's skull look excellent. This guy stands out on your shelf, no doubt about that.  Of course, Adam is decked out in his schoolboy uniform with his tie flapping in the breeze. I love how happy he looks, which is part of the appeal of the Garbage Pail Kids. 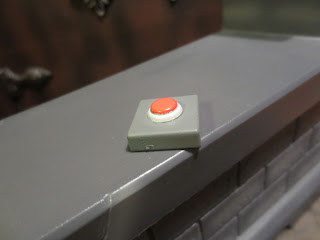 * While the mushroom cloud piece is removable, it really is part of Adam Bomb's "look." The true accessory is the big red button of death that he must have hit to trigger a nuclear explosion. It's simple but effective: This button could be used for all sorts of things! Of course, it fits easily in his hand and completes this nostalgic portrait of 1980s nuclear war paranoia! 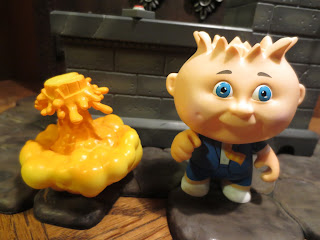 *My biggest problem with the mushroom cloud popping out of Adam Bomb's cranium is that it doesn't actually attach. It really just rests in a hole in his head. If you're going to play around with this figure, you'll find that the mushroom cloud falls o rather easily. I wish the fit were a bit tighter. 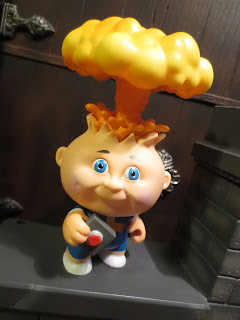 C'mon, let's be honest: Adam Bomb is the face of the Garbage Pail Kids. He's really rather iconic in terms of 1980s pop culture and he's probably the figure most collectors would want to ensure they pick up. Everything about him is quite fantastic except for the fact that the mushroom cloud just doesn't snap tightly into his head. It falls out far too easily. Overall, it hurts my score of Adam Bomb a bit and I feel like he's a Good and a 1/2 figure overall. Still, I don't imagine many folks will collect this line without picking him up. He's still a blast, though.