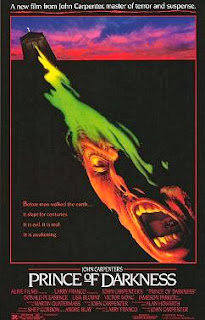 I originally wrote this review in October 2013 for ThEpic Review.

John Carpenter's Prince of Darkness is definitely one of the director's least well known films. While many of Carpenter's films failed to perform well when released, most of them (such as The Thing and Big Trouble in Little China) have developed cult followings and even been reevaluated over time. Prince of Darkness certainly doesn't have the cult following of those films, but it still manages to be a fairly creepy horror film that combines an exorcism/possession film with a zombie movie and a techno-babble laced thriller. When a Cardinal dies and leaves behind a box containing a key to a mysterious door in an abandoned church in downtown Los Angeles, a priest (Donald Pleasance) finds that an ancient religious order has been guarding a giant vat of swirling green liquid that may contain the physical elements of the Anti-Christ in the basement. It's also the second film in Carpenter's "Apocalypse Trilogy" along with The Thing and In the Mouth of Madness. Sound intriguing and slightly insane? Well, it's both, but we'll get to that after the break.


I don't think anyone can deny that the plot to Prince of Darkness is insane. It involves theoretical physicists, tachyon transmissions, religious conspiracies, ancient manuscripts, possessed women spewing slime, huge swarms of insects, anti-matter, and Alice Cooper leading an army of killer street people. When the priest decides that he needs assistance with the little secret in the basement he's discovered, he calls in the services of Dr. Howard Birack (Victor Wong), a physicist and professor who gathers together a large group of students and fellow academics from a variety of disciplines to try and make sense of what's happening in the basement of the church. After their equipment is set up and they begin their investigation, they soon realize that the building is surrounded by an army of street people. Soon, various members of the team become possessed by the evil power of the green liquid and work to either overtake or kill their former colleagues. There's lots of science and techno babble, as well as crazy religious conspiracies; it's like something Dan Brown might come up with after dropping acid. But you know what? I think it works here. Carpenter treats lofty theoretical science and ancient theological hypotheses with the same seriousness, and creates a movie that plays by it's own rules, and yet, when watching it, feels somehow strangely plausible. I mean, just writing about the movie makes me realize how insane the plot is, but when it's playing in your DVD or Blu-Ray player, the atmosphere and music just combine together to make things really creepy.

One of the best aspects of the movie is the really gross special effects, particularly the possessed body of one of the students, Kelly (Susan Blanchard) who absorbs most of the liquid and thus becomes a host to the parasitic Anti-Christ. Her look continually changes, so one moment she might look like a burn victim while the next she looks like someone who has been recently skinned. There's also a fantastic scene where a researcher who has since been overtaken by evil delivers a message to his former colleagues. While talking to them, they realize that his whole body is pulsing because he's being filled and devoured by insects. Eventually, his body just falls apart as he gets eaten away. There's also a guy getting impaled by part of a rusty bicycle, another guy piercing his own throat with a broken piece of wood, and possessed girls vomiting green liquid into people's mouths.

One of the most fun things about the movie, at least for a fan of John Carpenter's films, is that many of his regular contributors appear in the film. Of course there's Donald Pleasance, who was Dr. Samuel Loomis in Halloween and the President of the United States in Escape from New York, but there's also Victor Wong (Egg Shen in Big Trouble in Little China [he was also the grandpa in 3 Ninjas]), Dennis Dunn (Wang Chi in Big Trouble in Little China), Susan Blanchard (credited as the Ingenue in They Live), and Peter Jason, who appeared in They Live, In the Mouth of Madness, Village of the Damned, Escape from L.A., and Ghosts of Mars. The film has a large cast of good actors, but I can't say that they get a lot of time to really develop as characters. Even the two leads, Jameson Parker's Brian Marsh and Lisa Blount's Catherine Danforth, aren't engrossing enough to get the audience to care about the characters. Some of Carpenter's films show a mastery of creating characters with minimal screen time but memorable personalities (especially Halloween and The Thing) but Prince of Darkness just doesn't succeed in doing so. Overall, I give it a Good. It's a fun, creepy movie with some shocking scenes, but it's definitely not a film I'd consider a true classic.