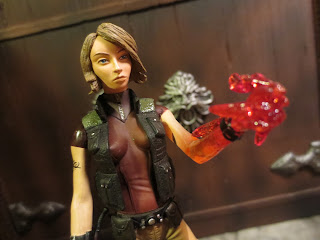 Today I'm looking at another figure from WizKids' Shadowrun Duels line: Kellan Colt! Originally a ToyFare magazine exclusive offered in March 2003, 1 and 2, Kellan Colt reuses most of the body from series 1's Kyushi and the accessories from a few different figures to make a cool new female mage. Last month when I reviewed the Street Deacon I talked a little bit about the history of the line. Attempting to marry together traditional action figures with a rules based game has been around since at least Battle Beasts and Monster in My Pocket, but Shadowrun Duels took it to the next level as each figure came with a rulebook easily as complex as anything you might find in the average game at your local gameshop. Today, before looking at the figure itself, I want to share a few thoughts as to why I think this concept just didn't succeed:

1. Distribution: Back in 2003 buying action figures off of the internet was more of a rarity. There were definitely not the number of e-tailers, online auctions, or Amazon sales that there are today. If you wanted these you had to know about them or buy them in person. Too bad they seemed to have some fairly limited distribution. They tended to mostly appear at specialty retailers like game shops, which leads me to my second point...

2. Confusion: Walking a fine line between game pieces and action figures seemed to prove unappealing to both sides. Serious gamers saw toys while action figure collectors saw unknown characters. The price was also a bit higher than the average figure. If I recall correctly, and that hurt the impulse buy of getting folks into a new line.

3. Not User Friendly: As game pieces, these are clumsy and awkward. They require a lot of space to play and can be somewhat fragile; both not qualities that tabletop gamers typically look for.

Sadly, these three issues kept these amazing action figures from getting into the hands of collectors. While not every figure features excellent articulation, they all features amazing sculpts and accessories courtesy of Plan B toys who handled the creation of these figures. Ready to check out today's figure? Then join me after the break... 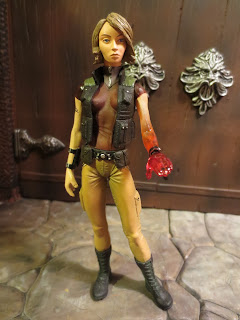 Accessories: Base, 10 assorted dice, two sets of hands (1 set with pegs and one without), a cattle prod, a necklace, an explosives pouch, a bandolier of grenades, tactical vest, tape measure, and a rule book. 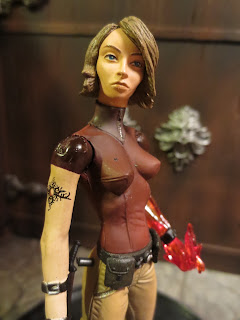 *I love the slightly futuristic, dystopian, somewhat magical style of these figures. While Kellan is a magic user, she doesn't dress like she's in the middle ages: She looks like a futuristic miner or something. Think of the style of Borderlands, Fallout, or even some of the more recent Final Fantasy games and you'll have an idea of the aesthetics of these. I love her headsculpt. It kind of reminds me of a tough, no-nonsense girl of the early 1900s. 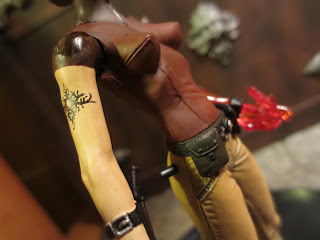 * Kellan is covered with cool details. I love the tattoo on her right forearm, the interesting seams on her shirt, the lacing on her boots, and the various pouches on her belt. The paint work really accentuates the fine details of the sculpt and creates a stunning looking figure. 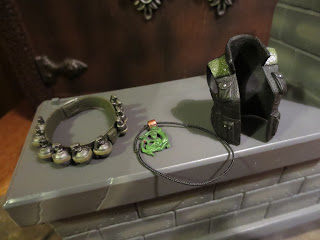 * All of the figures in this series came with some cool accessories and Kellan Colt doesn't get shorted just because she's a promotional figure. She's got a whole bandolier of wicked looking grenades (great sculpting and paintwork here), a magical green dragon shaped necklace of some sort, and a tactical vest with lots of handy pockets and green shoulder pads. I love how many different looks you can give the figure with these items. 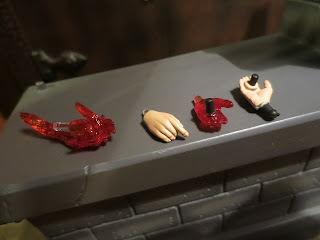 * The figures in this line always have multiple hands. Some with pegs and some without. While many accessories can be held with the standard hands, the pegs help to securely hold gameplay pieces. Kellan has her basic hands but she also has a fiery, translucent red hand that shows off her magical abilities. One hand has a peg while the other shows her creating some sort of magical flame. 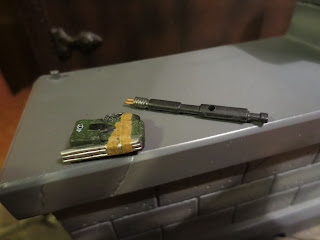 * To cause some more damage, Kellan comes with a homemade explosive device (it looks like a grenade and some metal bars duct-taped to a military styled pouch) and a hand held cattle prod. Both items have holes in them and can either be held on one of Kellan Colt's pegged hands or attached to the peg on the rear of her belt. 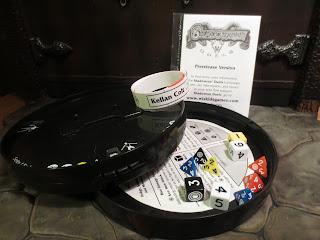 * Irregardless of whether you play the game, the game pieces are pretty nice. The stand is huge and is a nice, classy way to display the figure (and all of her accessories) and the dice can be used with a variety of games. I've been using some of mine in Dungeons & Dragons games for years! 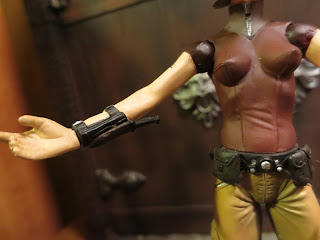 * This isn't a huge issue, but the little knife on Kellan Colt's right forearm was bent right out of the package. Yeah, this is an older figure that I just ordered online and opened within the past month, but it's still something to watch out for. 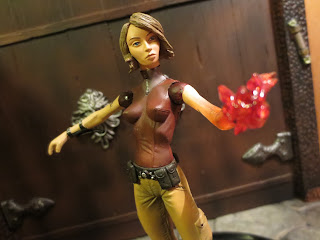 * So...here's Kellan Colt's downfall: She has no articulation in her lower body. No swivel boots knees, or even hips. Considering these were kind of intended to be gaming pieces utilizing the bases, I can understand that. Of course, other figures have much better articulation. Maybe it's just that the female figures are less articulated? 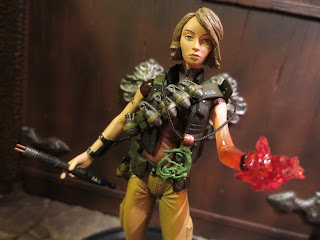 Despite the lack of articulation in her lower body, I still really like Kellan Colt. In all honesty, there's not a figure in Shadowrun Duels that I don't care for. They're all varying levels of excellent. Kellan gets a Great rating. While she has a lot of parts from other figures, she still feels like a cohesive, unique figure and an interesting character. I paid around $6 for her online and I feel she was definitely worth it. It's interesting that action figure lines from roleplaying games have been attempted but have never really caught on. The 1980's Dungeons and Dragons line had some success, but it's unreal that a fantasy property like D&D hasn't had another action figure line (Hasbro's Kre-O efforts with the property a year or two ago seem to have failed). Shadowrun Duels didn't make it (despite an amazing looking third series) and even Funko's Magic the Gathering line kind of wasted away. These properties seem so toyetic, so what's the problem?

As mentioned above, I've also reviewed the Street Deacon from series 1.
Posted by Barbecue17 at 9/17/2015