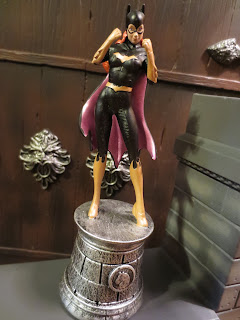 Fancy a game of chess? A few weeks ago I was on vacation around Gatlinburg and Pigeon Forge, TN and I had the chance to stop in at a comic shop I always enjoy visiting: S&G Comics & Collectibles in Sevierville, TN. They're a nice local comic shop and I stopped by there for a while out geocaching with my family. They seemed to be having a sale on the DC Superhero Eaglemoss Publications chess pieces and I managed to pick up this Batgirl for $13. I've known about her existence but never happened to run into her before. If you're unfamiliar with them, Eaglemoss Publications puts out sets of chess pieces where a new piece in the set comes out every few weeks. So far as I'm aware they've released three sets based on DC comics: A Batman set, a Justice League set, and a Forever Evil based set. Interestingly, they manage to out out a wider range of characters than DC Collectibles does in their action figure line (seriously, the chess pieces have Montoya as The Question, Black Bat, Batwing, and Ventriloquist). Today I'm taking a closer look at my Batgirl chess piece, who happens to be one of two white knight playing pieces in the overall Batman set. Ready for a closer look? Then join me after the break... 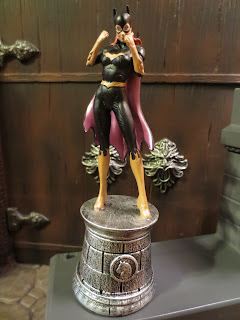 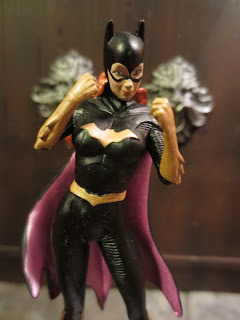 
* The sculpt is really quite nice. Many (although not all) of the characters in this set feature their New 52 appearances and here Batgirl is decked out in her more modern black and gold armored outfit with the purple lined cape. The armor has a ribbed texture to it and you can actually even make out a nice smirk on Barbara's face. This really is a pretty nice sculpt with clear, crisp details for something this size. 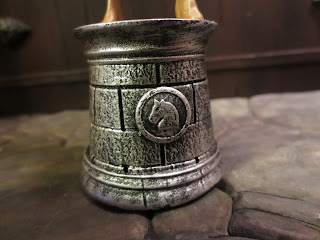 * I love the high base that Batgirl is standing on. As already mentioned, Bibs is a white knight (along with Red Robin), and if you forget that you'll be reminded by the image of the knight's familiar horse shaped piece is clearly visible on the front and the read of the base. The base has a nice brick like texture and a dark paint wash. It captures both the classic elegance of a chess and the gritty feel of Gotham. 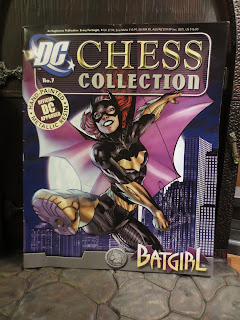 * One of the coolest things about these releases is that every piece comes with a book. It's a magazine sized 16 page publication that features a listing of the other pieces on the team, lots of full color images of the character and information about their history and significant plot lines, and a short strategy section on using the piece in chess. It's a neat extra that really intrigues me and adds some value to the overall set. I'd love to just have the guides for the other Batman heroes and villains as these are so well done. How cool would it be if more toys included character info like this? 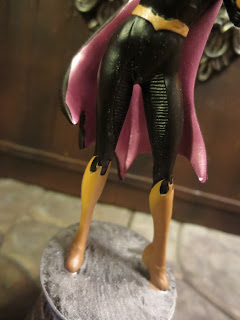 * My only real negative here is that the paint work is a bit messy in some places. Some of the edges around the cape and the gold accessories are a bit sloppier than I'd like. There's also a good deal of slop on the base from where her gold boots were painted.
With the chess piece you're getting exactly what you see: A 5 1/4 inch mini Batgirl statue that doubles as a chess piece (or is it a 5 1/4 inch chess piece that doubles as a mini statue?). The little book, however, really adds a lot of value and interest to the set for me. It's just a nicely presented set and I can see how even someone who doesn't like chess would find these to be excellent collectibles. While I doubt I'm going to go and pick up the whole set (although obtaining the white side of the Batman set is tempting) these are tempting as they're a beautiful set of small, affordable statues with an amazing breadth of characters. Overall I'm giving this set a Great rating. These are quite cool and definitely worth looking into for DC fans.

I haven't reviewed any other chess pieces, but I've reviewed plenty of Batgirl stuff: