Action Figure Review: Shadow Weaver from Masters of the Universe ReAction by Super7 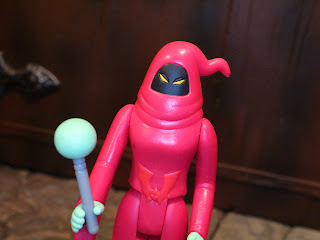 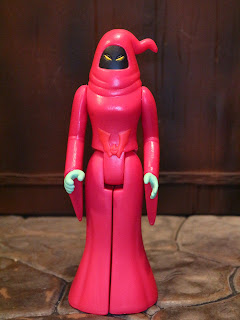 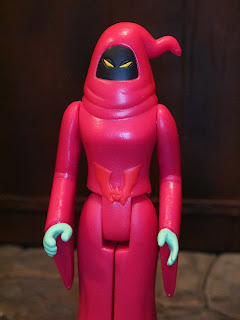 
* Shadow Weaver absolutely looks like a Filmation character come to life! Seriously, her design really captures the Filmation aesthetic perfectly, even with the Faux retro styling. The colors, the smoothness of the sculpt, and the overall design just ooze the coolness of her animated appearance. She stands out in the ReAction line in a great way and kind of reminds me of Prime Evil from Filmation's Ghostbusters. 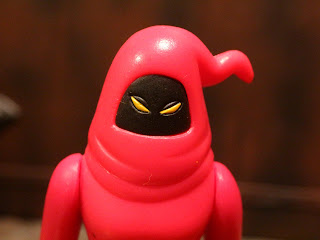 * Shadow Weaver's face is hidden within the hood of her robe, so all you can see are her glowing yellow eyes. The eyes are painted on, preserving the mystery and the animated aesthetic of the figure. 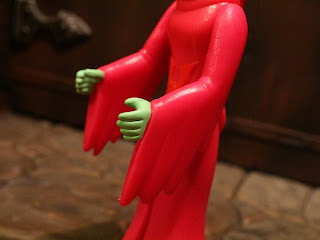 * In like how Shadow Weaver's sleeves look like they're drooping. Yeah, the arm spikes aren't something typically desired on modern figures but for something like this they look great. I love her eerie green hands, too! 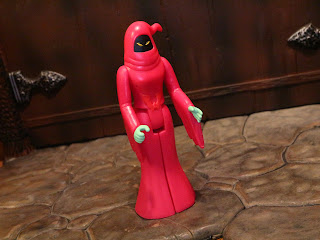 *    If you've ever picked up a retro figure like this, you know what to expect. Well, Shadow Weaver is a bit different as her head doesn't turn, so she only has 4 points of articulation instead of the more common 5. Her lower legs fit together nicely, preserving the look of a robe wearing figure. Some of the Funko era ReAction figures didn't handle robed legs well but Super7 has been very consistent in the quality of their ReAction lines over the past couple of years and has definitely perfected the style. 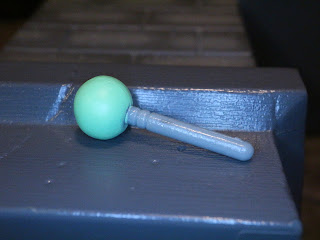 To give her something to aid her in casting evil spells, Shadow Weaver comes with a magic wand. It's grey with a green tip and while it looks a bit short, it actually fits the figure nicely. 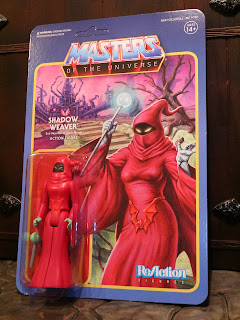 * The card art on most ReAction figures released by Super7 is beautiful and their Masters of the Universe line is no exception. Shadow Weaver features an awesome illustration from Jason Edmiston of the character with a Fright Zone background.  I like how the Evil Horde got their own unique backers. To preserve the card I actually made a slit in the top of the blister so I can slide the figure in and out. It work great and allows the figure to be displayed inside and outside of the card. I've got mine hanging on a metal pegboard similar to what you'd see in a retail store! 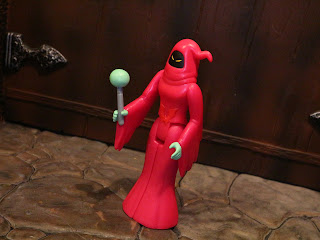 Maybe it's because there is a real lack of Shadow Weaver merchandise out there or maybe it's because she's a fantastic looking figure that just oozes the charm of the Filmation aesthetic, but Shadow Weaver is a Great and a 1/2 figure. She's easily one of my favorite ReAction figures from the Masters of the Universe line! The colors are just excellent and really help her to pop off the shelf! While the core toy Horde get a lot of attention (Hordak, Grizzlor, Mantenna), most of the She-Ra specific Horde members like Catra, Dylamug, Scorpia, and Shadow Weaver don't. It's nice to see Shadow Weaver get the attention she deserves! Let's hope more of the Horde get ReAction figures, too!