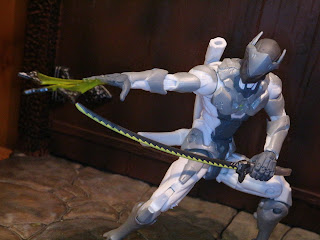 A week or two ago a new Overwatch Ultimates figure popped up unannounced on Amazon: Genji in his Chrome outfit! While Genji is going to be released in his regular skin as a 2-pack with Hanzo and in the upcoming GameStop 4-pack in his Carbon skin, this version of Genji was a surprise. Genji is a very cool character who not only has a fairly intriguing backstory (which I'll delve into more when the 2-pack comes out) but also has the game-winning strategy of being a cyborg ninja. When I was in 9th grade, back in 1998, I was obsessed with Metal Gear Solid. I loved the game, loved the toyline from McFarlane toys, and even went so far as to make my own Metal Gear movies with friends. Anyways, Genji reminds me a lot of Ninja/ Gray Fox from Metal Gear Solid and that makes me happy. I seriously want to love this guy but the figure has some issues that make him weaker than he should be. Let's check Genji (Chrome) out after the break and see how he fares... 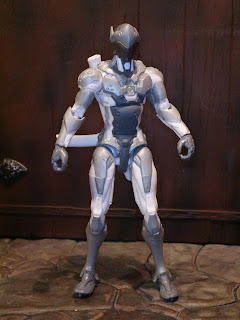 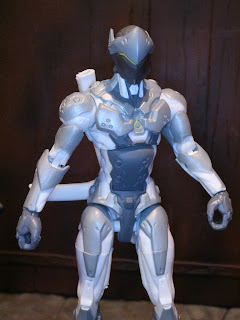 
* As I mentioned in the intro, the fact that Genji is a cyborg ninja is already a winning point in his favor. He's a incredibly looking character with a sleek design. While this is Genji in his Chrome outfit you might notice that he looks more grayish rather than silvery. It's still a nice look, though, and should look pretty cool alongside the upcoming white outfitted McCree and Tracer. Genji's outfit is nicely detailed with lots of defined armored plates and various ports and such. 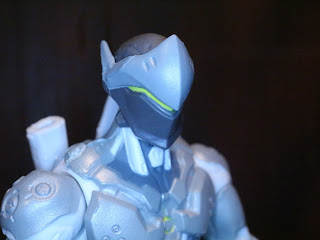 * Genji is wearing a helmet that covers his whole head. It kind of reminds me of Reinhardt's helmet, though I imagine that's unintentional. The visor is yellow, so while there are no eyes there is at least an eye line. There's also a white flowing band coming from the back, presumably intended to be the tail of a headband of some sort. 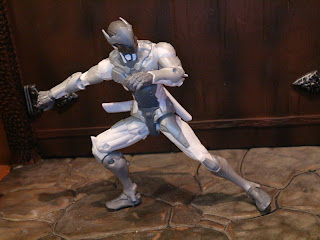 * Overall I'm pretty happy with Genji's articulation. His hips have a nice rage of motion and his knees and elbows are double hinged joints. Genji also has the pectoral hinged joints that allow for a bit better motion. The Overwatch figures have felt really solid and durable, like all of Hasbro's other current lines, and they're just insanely fun to play with.. Genji is no exception there: I can't stop picking him up. 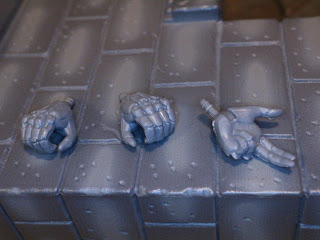 * Like most of the other Overwatch figures, Genji comes with four interchangable hands. Three of them are standard hands: A pair of standard gripping hands and a left hand with two fingers extended, perfect for all sorts of ninja-like poses. 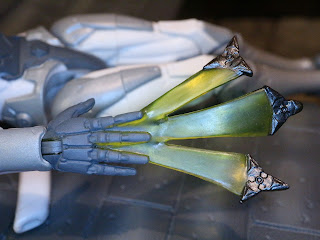 * The fourth alternate hand is the coolest: It's an outstretched left hand showcasing Genji's shuriken tossing ability. In the game Genji can either toss three shurikens in a row or toss three shurikens in a spread, known as the Fan of Blades. This looks awesome in person! The yellow "motion effect" is a bit rubbery but it stays in place well and really sells the effect of these being in motion. 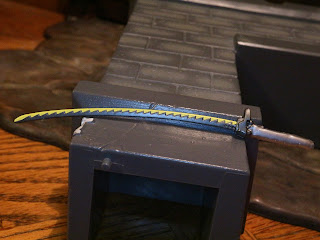 * Genji's primary weapon is this very cool katana which he uses in his Dragonblade attack. It's a beautifully sculpted katana with a very cool blade. The serrated look on the surface of the blade is actually sculpted, not just painted on, and the edge of the blade looks fantastic with a yellow highlight. 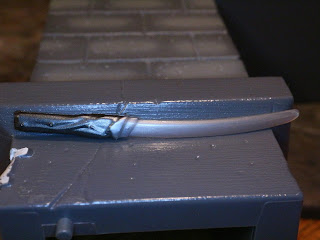 * Genji's wakizashi, used in his swift strike and deflect abilities, is a cool piece. It's not as detailed as the katana but it does look like it's in-game counterpart. 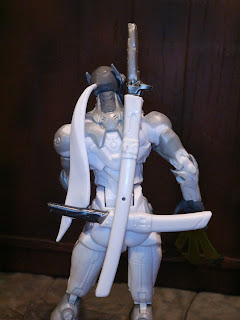 * Whenever Genji needs his hands free for other ninja stuff you can place the katana and wakizashi in the sheathes on his back. Don't you love when a figure can store all of the included accessories? 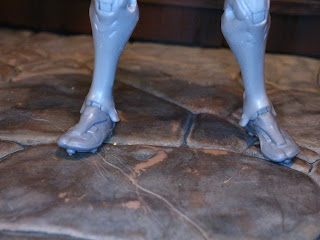 * The first problem I have with the figure is that Genji has two left feet. Literally. I don't mean he's a bad dancer! I really mean he has a left foot where his right foot should be. I don't usually see QC issues like this from Hasbro, so it's a bit surprising. If I can replace it I will. It's not horrible but it does irritate me. 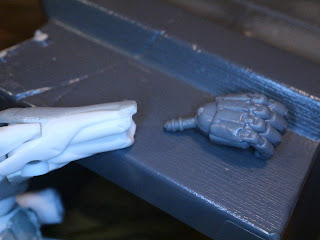 * Some of the figures in this line have hands that are easy to swap out, but not Genji. It's tough to pull these ones out. Heat up the wrists the first few times and things should work out better. 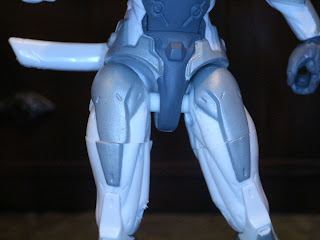 * Lastly, I gotta comment on Genji's crotch; it just looks odd. Well, it's actually less of a problem with the crotch and more a problem with the hip pegs that connect the thighs. The pegs seem too long, leaving quite a noticeable gap between the hips and the crotch piece. I wonder if this was done to improve the range of motion in the hips? It doesn't look very good, though. 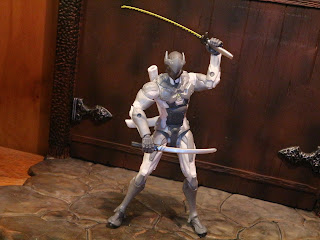 Genji is a very fun, but flawed, figure. Seriously, he has the potential to be one of the best in the line but the QC hiccup with mine (with two left feet), the weird hips, and the hard to swap hands leave him being a Good and a 1/2 figure. I'm hoping that the other Genji's that are soon to be released fare better, though, as the accessories and overall look of the figure are excellent. The only place I've seen this guy is on Amazon (no one has put him up for preorder), so I've been wondering if Genji (Chrome) is an Amazon exclusive. Does anyone know for sure?


This is the first figure of Genji I've reviewed on the site. For more Overwatch Ultimates, check out the following: