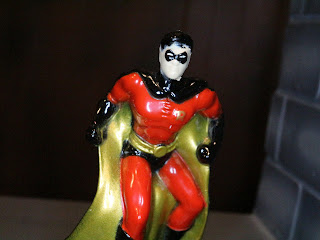 I'm over halfway through the DC Nano Metalfigs series 4 reviews now! Today I'm looking at the third and final repaint in the series, Robin. The checklist on the back of the package specifically labels this as Tim Drake, so that's cool. The costume looks right so I buy it. Tim Drake has had the alternate identity of Red Robin over the past few years and has used way more red, yellow, and black rather than green in his costume. Robin was originally included in the Batcave Nano Scene set so it's nice to have a single packed version available for folks just wanting a Robin. Interestingly, Tim Drake is still the only one of the Robins that we've received, although it sounds like Jada Toys has a Nightwing coming soon in new 20-pack but we still need Damian Wayne and Jason Todd, preferably as the Red Hood. Heck, I really want a Stephanie Brown, too, although I'd prefer her as Spoiler. Anyways, let's check out this new Tim Drake as Robin Nano Metalfigure after the break... 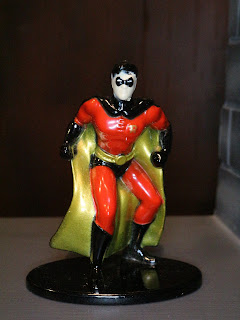 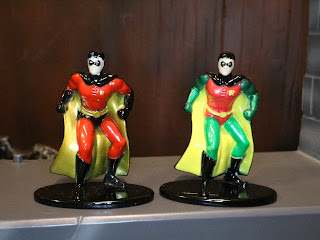 
* Here's a comparison pic of the two Robins released in the line. They're not too different other than the paint colors. Both of them have the same quality of paintwork as well, both of which are pretty nicely done. 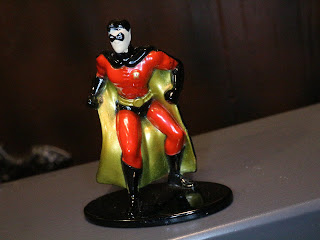 * There isn't much to say about this figure that is different from my thoughts on the original other than that I like that the color is a bit more modern and recognizable as Tim Drake. The gold cape looks nice although the molding of the cape and the body tends to make things look to skinny from the back. That seems to just be one of the difficulties in trying to capture a sculpt in die-cast metal. 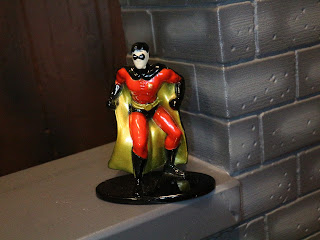 Considering that Robin was only available in the Batcave Nano Scene for so long, releasing a repaint available at the $1 price point was a good idea. Plus, his costume colors are mode recent here than on the first version. If you wanted to you could really use the first version as either Dick Grayson or Jason Todd, but this one is clearly Tim Drake's Robin. He's a Good and a 1/2 minifigure and a nice addition to the woefully undersized Bat-family currently available on shelves.

I've reviewd a few other Robin figures, although not all were Tim Drake. I've also looked at the Lego Arkham Asylum Breakout which included a Tim Drake Robin but I've also reviewed the Multiverse Damian Wayne Robin, DKR Carrie Kelly Robin, and Duke Thomas in his "We Are Robin" gear, as well as the Nano Metalfigs Robin that comes with the Batcave playset.