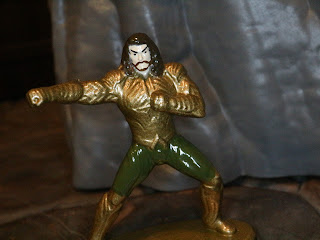 Series 4 of the DC Nano Metalfigs line offers up 12 new figures and this is the eighth one: Aquaman! Based on his appearance in the film Justice League where he was played by Jason Momoa, Aquaman adds another figure to Jada Toys' DCEU Justice League. Considering that Aquaman is slated for release in December, I'm sure we'll see more Aquaman merchandise over the next six or seven months, but right now this is what's available. Ready to check out this die-cast, die-hard ocean lover? Then join me after the break... 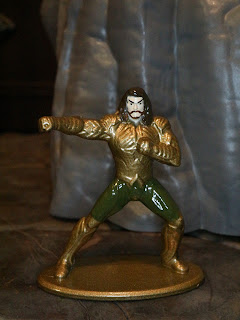 * Aquaman is an all new sculpt and features a fairly cool pose. I mean, it's not the best on display but if you're actually playing with these then I can imagine a kid would love to have a figure who is actively punching. Punching bad guys never gets old. I definitely would have preferred the presence of a trident here but that's just not what we got, is it? 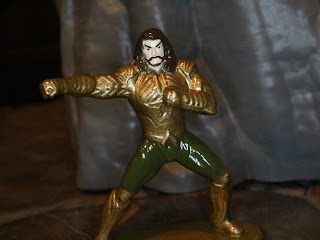 * Aquaman has some pretty slick armor. Jada Toys is doing a killer job of adding detail and clean paintwork to these smaller figures and Aquaman shows off some of the attention to detail nicely. Plus, the work on the face is pretty neat and clean as well. 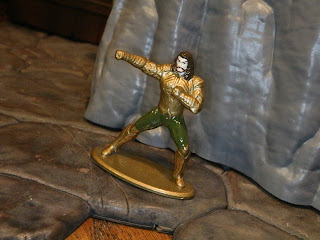 Aquaman is another well done figure in series 4. Jada Toys has upped their game since the release of series 1 last summer and we continue to get more characters with better sculpting and paint applications. While I still wish that Aquaman came with a trident he's easily recognizable as the character and an invaluable part of your DCEU Justice League. He's a Great minifigure and worth picking up considering he only costs around a buck. You can't beat that!

If you are looking for more Aquaman action figures I've also checked out the BvS Multiverse Aquaman, the Justice League Aquaman, the Toys R Us exclusive shirtless Aquaman, the Super Friends Aquaman, and the DC Nano Metalfigs Aquaman from the Pack B 5-pack and the Flashpoint Aquaman DC46.