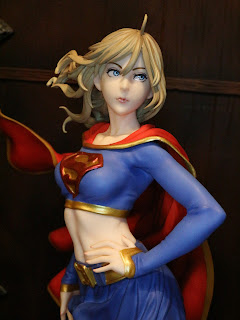 Can you believe that it has been about 7 years since Kotobukiya releases their original Supergirl statue in the DC Comics Bishoujo line? While there are plenty of other characters I'd like to see them tackle before getting into more second editions (Mera, Cheetah, Bumblebee, Killer Frost, and Hawkgirl would be nice), it definitely makes sense to release a new version of Supergirl. The earlier figures in this line have definitely jumped up in price and, with Supergirl's current popularity, she definitely deserves a more easily available product for her fans. Officially called Supergirl Returns, this statue started shipping out within the last month or so and can still be easily found. Ready for a closer look at this one? Then join me after the break... 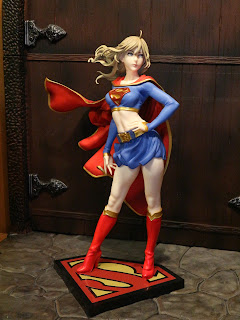 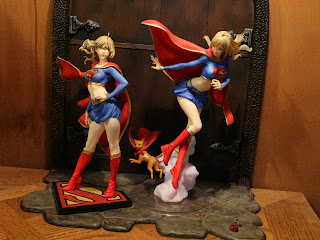 *On the left is the new Supergirl Returns statue while the original Supergirl (with Streaky) is on the right. As you can see, the poses are incredibly different. The styles are a bit different too as the Bishoujo series has become less "stylized" over the years. I actually like the pose on the newer figure a bit more than the original although the base is certainly a bit more bland. A costume change would have been more than welcome, too. 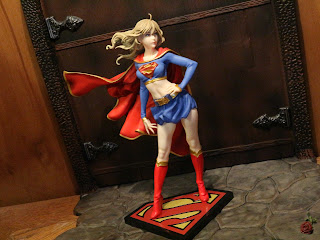 * Kicking things off you gotta talk about the pose, with this being a statue and all. It's actually a really great pose. The pose itself isn't incredibly dynamic but Kara's cape and hair definitely still express motion thanks to the way they are positioned. This is a great, classic looking Supergirl that should really please most Supergirl fans. 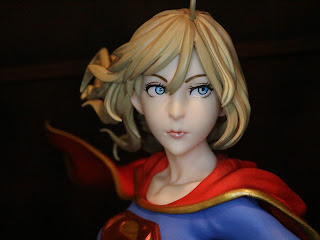 * The face is quite lovely. Kotobukiya always does a fabulous expression with the work on headsculpts, particularly due to their excellent plastic choices for skin tones and their clean paint applications. Supergirl looks very bold and determined here in a sculpt that seems to mix the Bishoujo style with more mainstream comic aesthetic. I think it works quite well here, helping to offer a statue with an entirely different pose and attitude than the original. 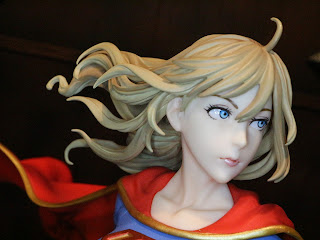 * Kotobukiya also always does beautiful work on their hairsculpts. They use plastics that allow for a high level of fine detail while not being brittle enough to break. Supergirl's hair is well sculpted, detailed, textured, and "posed" as if it is blowing in the breeze. 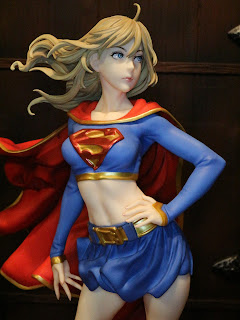 * The sculpt is excellent and while I would have liked to have seen a different costume here (I really like Supergirl's Rebirth costume but even the New 52 look would have offered something new) I can't fault the quality of the work. Kotobukiya is always absolutely incredible in the quality of what they offer, particularly in regards to sculpting fine detail and paint quality. 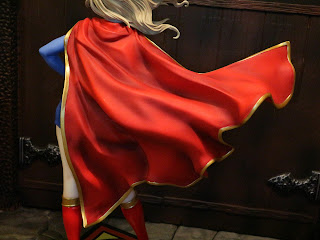 * The cape, like the hair, also brings the sense of motion to the statue by being sculpted as if it is blowing out away from the body. Again, Kotobukiya always does such a wonderful job sculpting material and fabrics while also adding subtle paint shading to make them come to life. 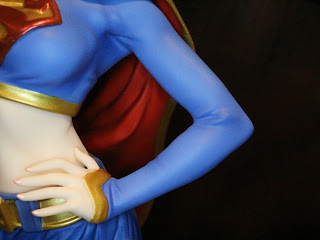 * First off, I'm impressed by the wrinkles in the fabric at Kara's elbows and wrists. It's a small detail but it shows how much awesomeness sculptor ke (comaccow) puts into their work. Second, the lightly painted nails look great. I really cannot say that I can recall a less than stellar paint application from Kotobukiya on any statue I've purchased from them. 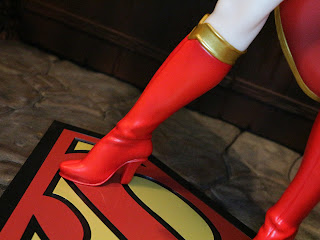 * The same level of detail is seen in Kara's boots. Not only do they look slick but you can see the material realistically "move" around the ankles. 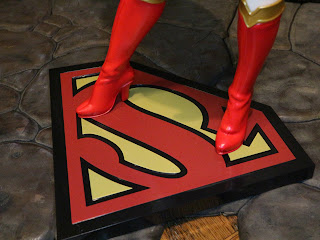 * Originally Kotobukiya's bishoujo statues had some really cool bases but for the last few years the bases have gotten kind of dull. While Supergirl's base is an "S" logo, which is better than a blank base, it's still kind of dull overall. Maybe the top of a building or something would have been just a bit more exciting. 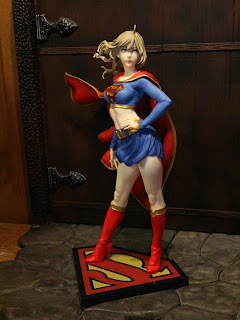 Supergirl shows off the incredible sculpting and paintwork that Kotobukiya always bring to their work. She looks excellent and, even though her base is a bit dull, the overall composition of the statue is incredible. She fits in well with the previous statues while still showing off Kotobukiya's evolving style for this line. I do have one complaint, however: Why did Kotobukiya choose the exact same costume as the previous statue wore for this Supergirl release? Both Wonder Woman and Harley Quinn have had second versions released and were given new costumes, so why not Supergirl? That's a strange decision, especially considering the number of different costumes she has worn over the years. I would have loved to have seen the hot pants version, the Rebirth version, the New 52 version, or even one based on the TV costume. She's Great, but maybe a bit too repetitive.

For more DC Comics Boshoujo statues from Kotobukiya, check out the following: