Something Has Survived!: Robert Muldoon from Jurassic World: Legacy Collection by Mattel 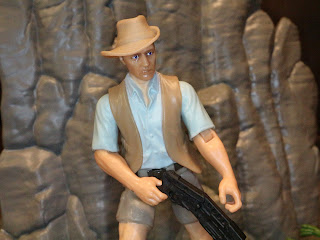 It's time for another review from Mattel's Jurassic World line. Well, actually this one is from the Jurassic World: Legacy Collection, a sub-line that includes humans, dinosaurs, and vehicles from the original films and some of the sequels. I'm not completely sold on what Mattel is offering here but I have enough nostalgia for Jurassic Park to pick up a few of the figures I run across. So far the only human figure I've grabbed is Robert Muldoon, the game warden of Jurassic Park. It's tough for me to pick a favorite character from Jurassic Park and as a kid I simultaneously went back and forth between pretending I was Alan Grant, Ian Malcom, and Robert Muldoon. To be completely honest, to this day I still can't run through a wooded area without pretending I'm Ellie Sattler, either. I think it's safe to say that Jurassic Park is still one of my favorite films and similar to Alan Grant's thoughts on the Triceratops, it was my favorite as a kid and I still love it today. Anyways, Muldoon was definitely one of my favorites. I remember how excited I was when it was revealed in the Topps comic book series that he didn't die after all. Sadly, Bob Peck passed away in 1999 and thus we've never been able to see the character have a return in the film universe. Now you can create whatever adventures you want with this figure, though. Let's check him out after the break... 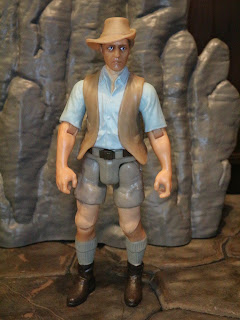 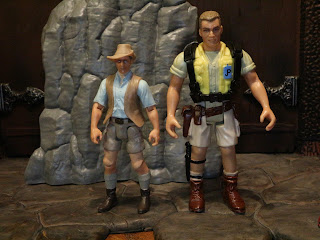 * Here's a comparison between Mattel's Robert Muldoon and Kenner's Muldoon (right). While I'm hearing a number of folks talking about these figures as being "Kenner inspired," the scale and style of the human figures is very different. Kenner's Muldoon is around 4 1/2 inches tall like the Aliens, Waterworld, and Congo movie lines. 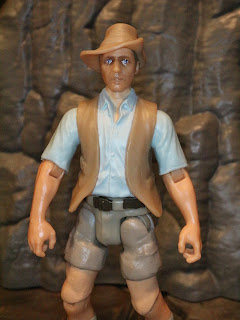 
* While Mattel's efforts are a bit lackluster compared to most other 1/18th scaled lines, they give Robert Muldoon a pretty accurate outfit. The khaki shorts, shirt, and vest matched with hunting boots and high socks definitely make Muldoon look the part of a big game hunter. He's a perfect companion for the Jurassic Park dinosaurs. 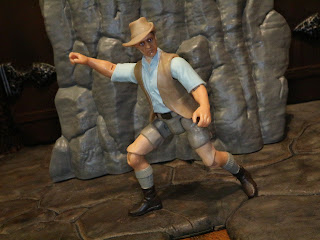 * The articulation is actually a little better than what you see on most figures at this price point these days with multiple swivel/ hinge joint combos. He's quite well articulated for playing around and even getting some basic poses. He's also solid and sturdy, so he should survive plenty of dinosaur attacks. 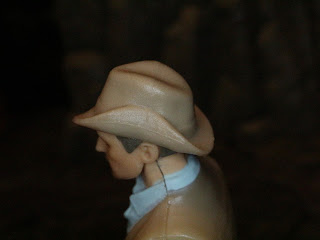 * The biggest thing I always wished from the Kenner figure was that it included Muldoon's awesome Australian hat. Thankfully Mattel included it here and it looks great. 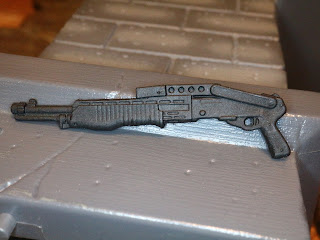 * Another cool inclusion here is Muldoon's SPAS-12 Shotgun. It's a fairly detailed and you can even see all of the little details like the folding stock. 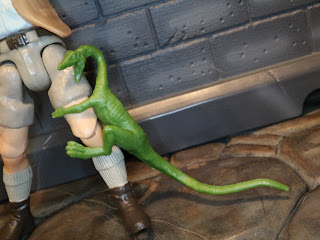 * Muldoon's second accessory is a little Procompsognathus, or compy, minifigure. While the compys didn't appear in the film Jurassic Park they did appear in the book and in the film The Lost World. Remember the Dieter Stark figure from the toyline for the Lost World that had a magnetic compy that clung to his chest? That was awesome. This was is somewhat pliable and can wrap around the Muldoon's arms, legs, or shotgun. 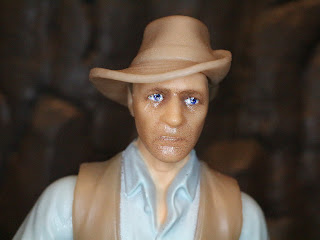 * The face on this figure is... really not good. I could handle the sculpt being off at such a small scale but why is it so dark dirty looking? He looks more like Ernest in his "snake guy" disguise from Ernest Saves Christmas. 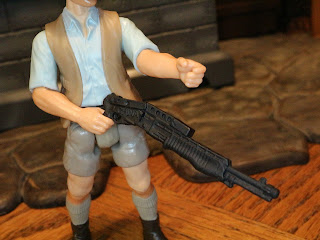 * Muldoon has some decent articulation for playing around but there is no way he can hold this gun with two hands. Even if you bend his arms, he can't keep the grip on the SPAS-12. 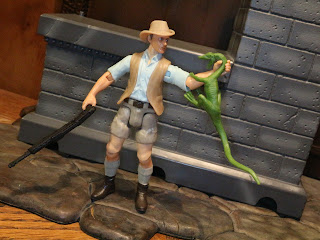 Considering this guy is available for under $10 dollars, he's not that bad. He's more of an accessory for your dinosaurs and makes a pretty cool nemesis to fight them. I particularly like the inclusion of a compy and the SPAS-12 which help to earn this guy a Good and a 1/2 rating. Personally, I'm kind of interested in seeing someone try to truly recreate the Kenner action figure style, particularly the movie lines like Jurassic Park and Aliens. We've seen so many other action figure styles get the nostalgia treatment and no I think it is the time for Kenner's 1990s movie lines.

This is the first action figure of Robert Muldoon and the Procompsognathus that I've reviewed.
Posted by Barbecue17 at 5/21/2018