Something Has Survived!: Pachycephalosaurus from Jurassic World: Legacy Collection by Mattel 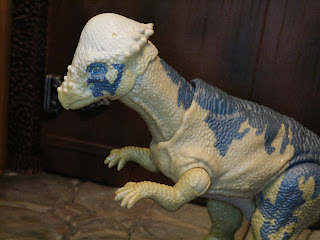 I have dinosaur fever, y'all! Today I'm checking out another dinosaur review from Mattel's Jurassic World: Legacy Collection line and it's the Pachycephalosaurus. I had the Jurassic Park: The Lost World Pachycephalosaurus when I was a kid and this one kind of reminded me of it. I do miss the dino capture gear that Kenner included with many of their figures as it definitely gave the figures a little something extra. Still, Mattel's efforts are pretty cool and I can appreciate these for the fun, inexpensive action figures that they are. Let's take a closer look at the Pachycephalosaurus after the break... 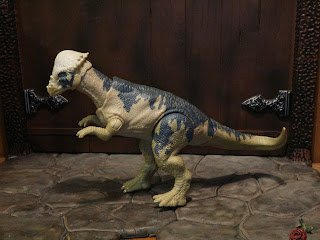 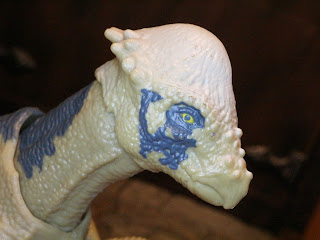 * With a name meaning "thick headed lizard" the Pachycephalosaurus is known for the thick, bony skull on the top of its head. The Pachycephalosaurus was a herbivore so Mattel managed to give this dinosaur a gentle, peaceful expression. It seems calm although that won't stop me from having Pachy ram everyone and everything under the sun! 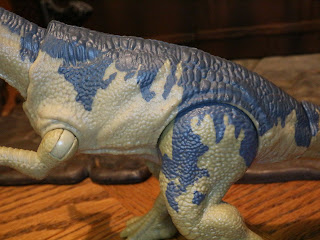 * The skin texture is pretty nice on this fellow as is the paintwork. I like the muted colors here. Maybe not as exciting as some of Kenner's color schemes but I like it. Especially the mottled blue on the back. 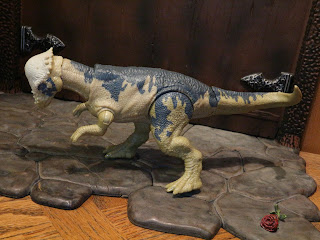 * The Legacy Collection dinosaurs all seem to have an action feature and the Pachycephalosaurus' is a ramming head. Just pull the tail down and the neck "retracts" into the body and then springs forward. It's a pretty cool feature and fun to play with. It also doesn't really hurt the sculpt much, either.

* Remember how the Kenner dinosaurs had that little "JP" brand on them? Mattel's dinosaurs don't have that but they do have this cool little symbol (maybe some sort of DNA-like design?) on the bottoms of their feet. Scan it with a smart phone and you can add new dinosaurs into the Jurassic Facts App. I borrow my wife's smart phone to use it (I don't have one) and it's kind of cool. It's a collecting/ trivia based game where you collect dinosaurs, learn facts, and take trivia contests. 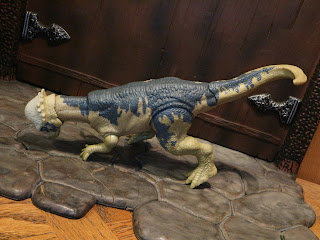 * The Pachycephalosaurus has swivel legs that unfortunately do not allow the dinosaur to easily stand up. It's pretty likely that your Pachy will just fall over on your shelf if you don't stand it up exactly right. Maybe it's a lysine contingency action feature? 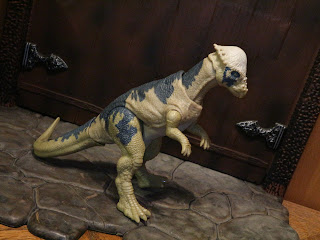 I like the Pachycephalosaurus. It's not the most well articulated dinosaur nor is it the most exciting but I do like the action feature. I don't know, there's just something about the ramming feature I really like. I also have lots of really good memories of the Lost World version of the dinosaur. It's kind of cool to have a dinosaur who does something different then bite or claw. It's a bit frustrating to get the Pachy standing but it's still a fun toy to play with. These really do remind me of Kenner's Jurassic Park offerings, so maybe that's why I like them so much. This is a Good and a 1/2 dinosaur for the collection.

This is the first Pachycephalosaurus I've reviewed on the site. For more Jurassic World: Legacy Collection reviews, check out the following:
Robert Muldoon
Velociraptor
Posted by Barbecue17 at 5/27/2018