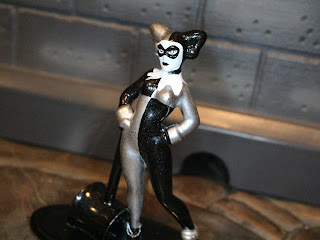 I'm still slowly but surely making my way through the fourth series of DC Nano Metalfigs from Jada Toys and today I'm checking out the second of three repaints in the line: Harley Quinn. The original Harley Quinn Nano Metalfig was released last summer in the first series of figures but, unfortunately, she had a lot of problems. While this is mostly just a grayscale repaint of that figure, it turns out that Jada Toys made some improvements here with cleaner paintwork and better molding. Want to take a look at this very cool Black and White Harley Quinn? Then join me after the break... 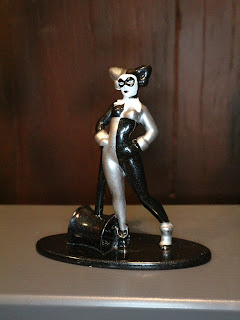 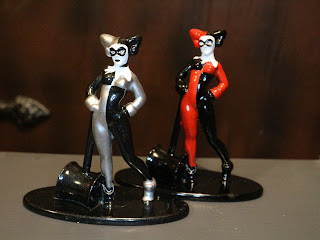 * On the left is the new grayscale Harley Quinn (DC55) while the original Harley (DC17) is on the right. As you can see, besides the obvious paint differences the face is so much neater and cleaner on this new one. Jada Toys has continued to improve the figures with each subsequent release and Harley here is no exception. 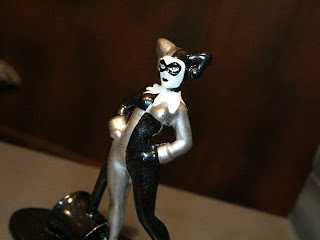 * I really like the greyscale paintwork here. I have no idea what inspired it (maybe the Batman: Black and White statue line?) but it looks great and adds something unique to the shelf. The face is quite detailed for such a small figure. Another improvement here is that Jada Toys improved Harley's posture. The original Harley seemed to lean back too far but this one looks great. 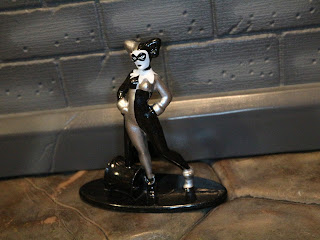 A black and white/ greyscale Harley Quinn was an interesting choice but I think it paid off. While I'd love to see more versions of Harley in the line, this is a cool choice for a repaint. Jada Toys not only offered up a noticeably different repaint but improved nearly everything about the original figure, too. That's pretty impressive and speaks well of their commitment to this line. Harley Quinn (DC55) is a Good and a 1/2 figure and definitely worth tracking down if you're a Harley Quinn fan who wants a cool little die-cast metal figure for your shelf.

I've reviewed so many Harley Quinn figures that she has her own review index: Check out the Harley Quinndex for more Harley!