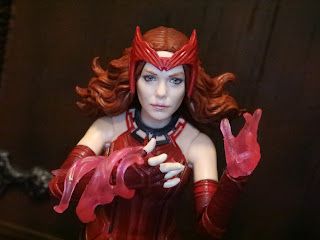 I've had Scarlet Witch for a few weeks now but I'm just finally getting around to reviewing her! The Shang-Chi and recent X-Men series of Marvel Legends have been relatively easy to find as I've seen complete sets multiple times. The Disney+ themed series has been pretty tough, though. Being mostly a collector of the comic themed figures, the only figures I was looking for from the set were Baron Zemo (whom I've already reviewed) and Scarlet Witch and I think I've only seen them at retail one time each. I liked Wanda Maximoff quite well after her appearance in Civil War (I thought she was a bit dull in Age of Ultron) but WandaVision absolutely made her standout as a character and really elevated my love for her. The fact that she finally became known as the Scarlet Witch and wore one of the best costumes in the MCU didn't hurt, either. Hasbro did an incredible job with this figure and I really think she's the high point of this series. While there's no Agatha Harkness for her to square off against yet I don't think that's keeping folks from picking her up. Let's take a look at the Scarlet Witch after the break and see if she's as magical as she seems... 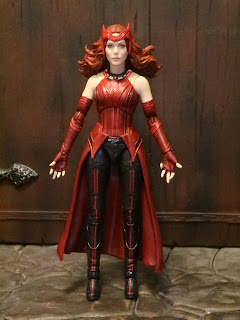 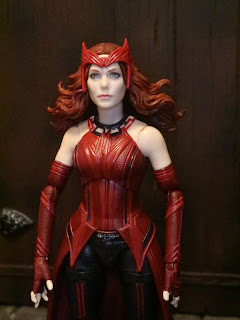 * WandaVision quickly became one of my favorite MCU events ever and I think it started strong (though offbeat for sure) and finished strong. The reveal of Wanda Maximoff as Scarlet Witch was incredible and made for a great payoff and milestone of her character development. She also has one of the best costumes in the MCU to date (this one's up there, too) and Hasbro absolutely nailed it. Again, I haven't collected many MCU based figures for years and usually just pick a random figure here or there that I like but this was a must have for me. There do seem to be some minor differences due to changes made in production/ post production but overall it feels very accurate. The colors are gorgeous and the design and detail present on this figure makes her one of the best Marvel Legends of the year. Probably one of the best MCU Legends I've seen, really 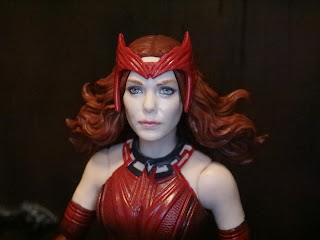 * I'm quite impressed by the sculpt. While it might not be 100% perfect in pictures I think there's no denying who this is. It looks just like Elizabeth Olsen, especially around her cheekbones, lips, and eyes. The work on her tiara is amazing, too, and I love how her hair looks windblown like when she's in battle with Agatha. I'd probably buy some WandaVision figures all day, especially Agatha and a 1950s/ 1960s version of Wanda and Vision. If Hasbro made them in their magic act outfits I'd preorder them in a heartbeat. 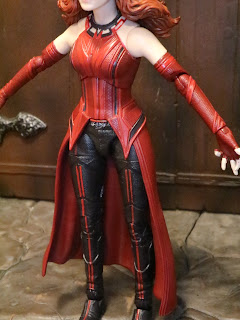 * The pants and ...skirt, or coat? I don't quite know what to call it, but it looks really nice. There's some wonderful detail here and the outfit does a nice job of feeling very comic book inspired but very practical in an MCU sort of way, too. The paintwork is really strong on this figure all around. 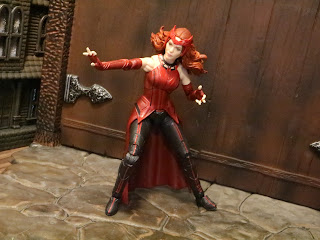 * The articulation is good, too. The fact that the skirt kind of sits back behind Wanda's legs helps to preserve their range of motion. Yeah, she's can't crouch or anything, but overall I think she can do what she needs to do. She has fantastic movement in her head/ neck and in her arms, too. The range of motion on her elbows is amazing and allows her to make all kinds of cool gesturing poses.

* Scarlet Witch comes with two sets of hands that you can swap out easily: A standard pair of gloved hands and a pair molded in translucent pink plastic to show her powers in action. The pink hands look really good and are very eye-catching. 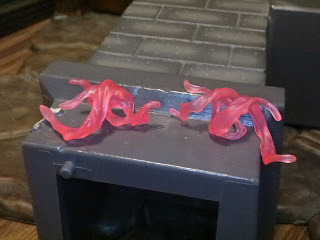 * For extra magical fun you can wrap these translucent energy effects around the Scarlet Witch's forearms! They go great with the regular or translucent pink hands! 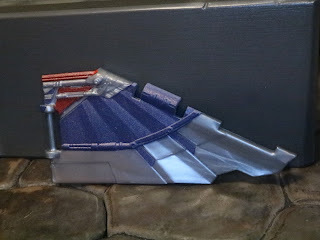 * Last up is the middle of the left wing for this series' build-a-figure. Rather than building a straight up figure this series lets you build the wings for Sam Wilson as Captain America. I'm not overly fond of the idea (Sam should have been his own release with his wings included intact) but I can't fault getting an extra piece that I can trade off or sell. I'm looking forward to another release of the comic styled Captain (America) Falcon, probably nicely updated. I'm sure we'll get one at some point next year. 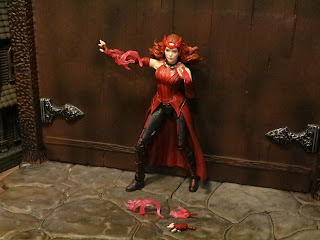 Scarlett Witch is an Epic Marvel Legends figure and I'm pretty convinced that she's the best figure from the Disney+ themed series. The sculpt, likeness, and paint are perfect and she has some fun extra pieces to display her powers. She definitely seems like the toughest figure to find in this series (seemingly followed by John Walker as U.S. Agent) and I found her at the same time I found my Origins Castle Grayskull which made for a pretty exciting evening. I imagine we'll see another version of Wanda as the Scarlet Witch for the inevitable Doctor Strange in the Multiverse of Madness series of Marvel Legends, but this one will be hard to beat.

If you're a fan of Wanda Maximoff/ the Scarlet Witch then check out my review of the Marvel Legends: Infinite Series Scarlet Witch (Maidens of Might).