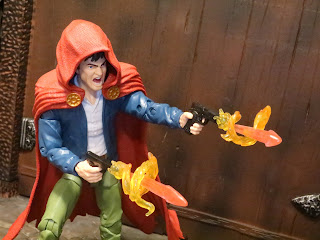 I'm slowly making my way through the Xemnu/ Super Villains series of Marvel Legends figures and today for my third review from the set I'm checking out The Hood! There are a couple characters in this set who I wasn't aware of before the series was announced and the Hood is one of them. Created in 2002 by Bryan K. Vaughan, Kyle Hotz, and Eric Powell, the Hood is the name give to smalltime criminal Parker Robbins after he acquires a magical hood and decided to go big time. Even though he's been around for nearly 20 years at this point I can't recall ever seeing or hearing about the guy. I still picked him up, though, because I was planning on buying over half of the figures anyway and I wanted to build Xemnu, he was one of the first figures I found from this series back in late June, and he just seemed like a fun toy. The Hood has become somewhat of an action figure punchline lately because what do you get when you remove his hood and pistols? A screaming average guy. Need a regular criminal for your figures to fight? Why not the Hood? Want to represent an action figure collector ranting about exclusives or fighting with a Target employee about the release of G.I. Joe figures? here comes the Hood! He's far more versatile than you might think! Let's check out a rather interesting Marvel Legends Series release after the break... 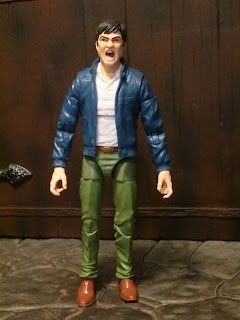 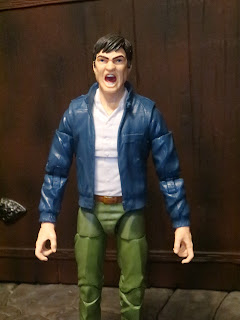 * Without his titular hood, the Parker Robbins is just a regular guy. he's wearing green slacks, a white button up shirt, and a blue jacket. If you took off the jacket he'd be dressed like Peter Griffin. Hehehehe. I'm pretty sure Hasbro has used this body for other "normal guy" figures like the Stan Lee figure and Peter Parker but it gets the job done and while it's not outlandish or garish or anything the blue and green still do evoke a comic book feel that makes the Hood fit nicely on your shelf alongside other villains. 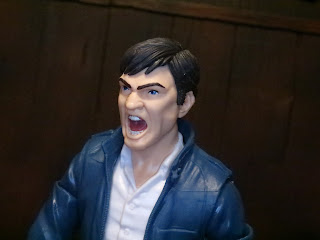 * The headsculpt has become a big talking because it's just so aggressive! I actually really like it as it helps the figure standout from just being a guy in regular street clothes. Expressive faces can be very cool or really weird on more realistic figures where you have a frame of reference for what the actor/ character should look like but since I have no real frame of reference for Parker I think it adds something really unique to the toy. It's a good portrait with nice detail and it makes him more fun to place in action poses. 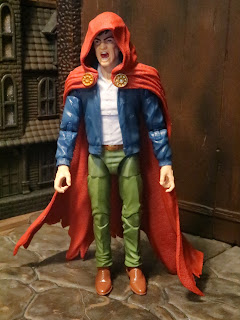 * Let's talk about the Hood's hood, shall we? One night while roaming through his hood the Hood stumbled upon the hood as group of hoodlums were summoning a demon or something. When he holds his breath it lets him turn invisible. I think more recent developments have placed the Hood's hood as belonging to Dormammu who is also in this series, but originally it just belonged to some regular Nisanti demon. the hood itself it a cool piece. It's a single solid piece with an excellent texture and some really cool tattering at the bottom. It makes for a very interesting looking figure when you place it on Parker as the mystical looking cape with arcane amulets on it definitely stands out when compared to his regular clothing. 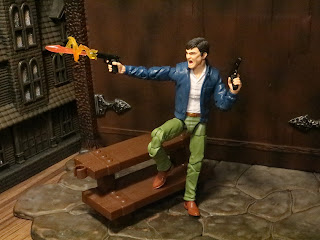 * For a regular guy in a regular outfit the Hood's articulation is excellent! I think the expressive, screaming face just makes him fun to play with! He's got nice tight joints and a great range of motion in most of them, too. 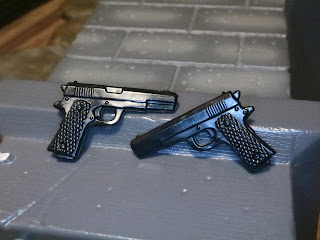 * Parker Robbins comes with two realistic pistols, something we haven't seen too often lately. They're nice looking automatics (they look like 45s) and they fit in the Hood's hands well. But wait.. there's more! 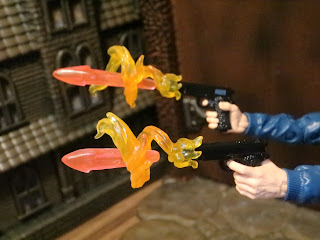 * Apparently the Hood doesn't even really use the pistols as firearms. Instead, he used them as focus objects to channel magical energy bursts. Two of those magical energy bursts are included and they fit securely over the barrels of the pistols. They're actually made from two different pieces (the questionably shaped energy bolt is separate but non-removable from the fiery swirl) and they really look very cool. They're pretty fun and make the Hood even more dynamic. 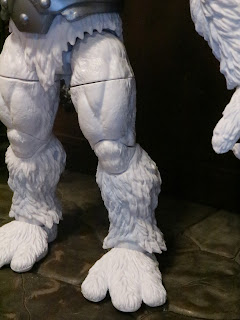 * Six of the seven figures in this series come with parts for the Xemnu build-a-figure (Dr. Doom is the figure without a piece) and the Hood comes with the left leg. After realizing I really wanted four of the figures in the set and was interested in Xemnu I decided to pick up everyone except Doom so I could  go ahead and complete him. If you're buying them all the BAF piece is a nice extra incentive. Otherwise, you can sell it and probably make a good percentage of your money back or trade it for something you need. 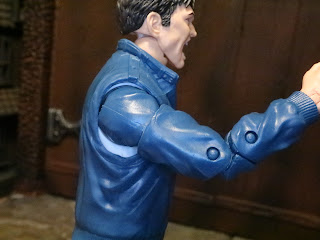 The Negatives:
* I've mentioned this on a few figures lately but it's a bummer that Parker's white shirt is so visible underneath shell of his blue jacket. Maybe Hasbro could have painted the edges of his torso blue or something? 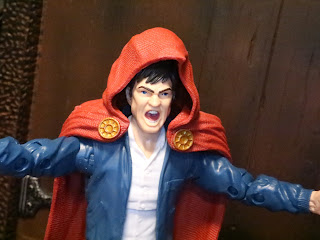 * Here's the biggest bummer of the set: The Hood's hood is really frustrating to work with. It's one solid piece so whenever you lift his arms (you know, to fire his included pistols) the hood lifts up over his shoulders and no longer sets correctly on his head or over his body. Considering the hood is what makes Parker special a bit more thought would have been nice. I think if the cape and the hood had been separate pieces it would have worked out much better. It's really tough to make him look right while wearing the hood in any pose except a plain vanilla stance. 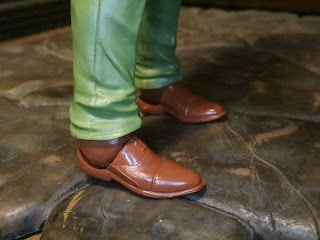 * The ankles on Parker's shoes are really weird, aren't they? They don't have much forward movement and they're kind of odd looking. 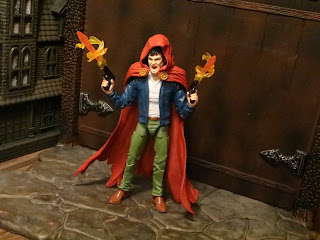 The Hood is an interesting figure with some cool accessories who is quite a bit of fun. It's too bad, then, that the defining feature of the figure, his hood, is rendered so poorly. It looks nice but it's about as functional as those solid plastic robes on the Star Wars: Episode I figures. Want to have Parker look to the side while wearing his hood? Nope. Want to have him use his weapons while wearing the hood? Nope. Mix that together with some of the little quirks of the figure and he ultimately is just a Good figure who could have been so much more with a little bit more attention paid to his design and engineering I guess.
This is the first figure of the Hood I've reviewed. For more Marvel Legends Series figures check out the following:
Marvel Legends Series by Hasbro (2016)
Enchantress (Mystic Rivals)
Firestar
M.O.D.O.K.
Nico Minoru (Mystic Rivals)
The Punisher