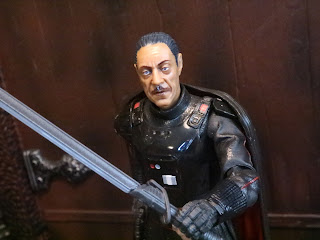 Moff Gideon is the last release from the most recent series of Star Wars: The Black Series Phase IV figures I'm getting around to reviewing and he might be the best of the bunch! He is technically a 2020 release as that series trickled out at the end of last year, but my guess is that most of you didn't see this guy until recently. Moff Gideon is a fantastic villain in The Mandalorian and while he has been defeated as the end of season 2, I can't imagine we've seen the last of him. He's certainly one of the most stylish Imperials we've ever seen! Hasbro did an amazing job with this guy and he's one of the many reason why Star Wars: The Black Series made the list of My Top 10 Toylines of 2020. Let's check out Moff Gideon after the break... 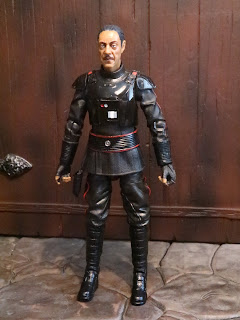 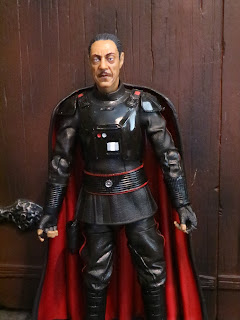 * Moff Gideon is wearing a very unique outfit. Underneath his battle armor is seems like he's wearing a black Imperial outfit but there are clearly red blood stripes down the sleeves. He's supposed to have been part of the Imperial Security Bureau s maybe this is some unique outfit we just haven't seen yet. I guess as a Moff he could wear whatever he wants, especially now that he's leading his own Imperial remnant force. The paintwork is excellent here and I like how Hasbro differentiated the matte surfaces of the uniform with the shiny surface of the battle armor. It's fantastic and makes him seem very intimidating and powerful, You just have to take one look at Moff Gideon and you know who's in charge. 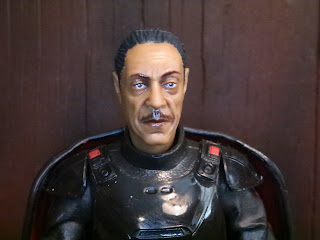 * Moff Gideon has one of the best headsculpts I can recall in recent memory in the Black Series. Actor Giancarlo Esposito has a lot of character in his face and Hasbro did a great job of capturing it. The faceprinting and paintwork is flawless. 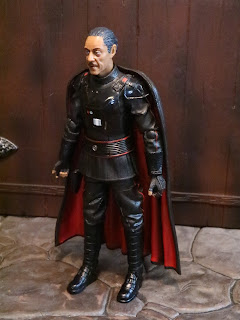 * Moff Gideon's cape plugs into his pack. It's made from rubbery plastic and while it doesn't move much it looks quite good on the figure. I would have preferred a soft goods cape but this one is on the better side for a plastic cape. The paint application on the red interior looks nice and the cape stays on securely. 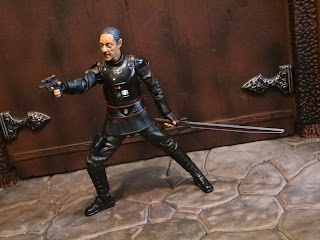 * Overall, Gideon's articulation is excellent. Coming with both a blaster and the Darksaber you'll definitely find yourself posing him in lots of combat poses which all look fantastic. He does have shoulder pads that restrict his shoulder movement a bit but the pads are a bit rubbery so they can kind of slip over the shoulders. 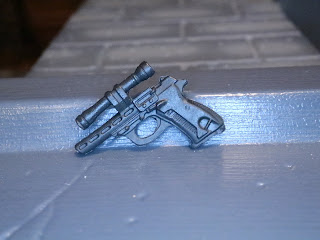 * Moff Gideon's blaster pistol is quite cool. I love the design, especially the barrel and the small scope on top. 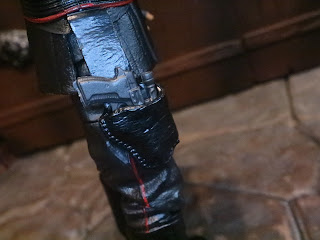 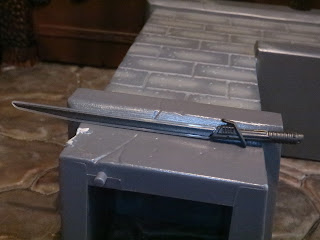 * The coolest accessory Moff Gideon comes with is the Darksaber. It's really cool to have this in the Black Series and Hasbro did a nice job. The edge of the blade is translucent, giving it a bit of a glowing effect. 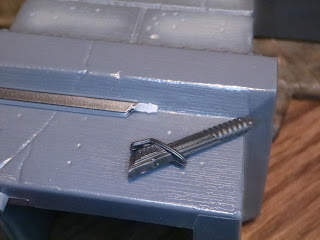 * The blade comes out of the handle so you can just have the hilt if you want. It's much sturdier than most lightsaber pegs, so that's a plus. 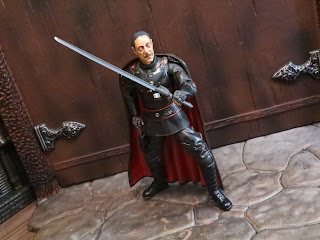 Moff Gideon is an Epic figure and definitely one of the best Black Series releases of last year. Hasbro did a really amazing job on him. His accessories are top notch and his portrait is one of the best in the line to date. He's a really cool figure and it's great to have him to anchor the various troops from The Mandalorian who have been released. Someone's got to tell those guys what to do, right? Now Hasbro: Bring on some Dark Troopers!
This is the first figure of Moff Gideon I've reviewed on the Action Figure Barbecue. For more reviews from Star Wars: The Black Series Phase IV check out the following:
332nd Ahsoka's Clone Trooper
Admiral Ackbar
Ahsoka Tano (The Clone Wars)
The Armorer
Cad Bane
Clone Trooper (Holiday Edition)
Darth Vader
Din Djarin (The Mandalorian) & The Child
Garazeb "Zeb" Orrelios
Greef Karga
Han Solo (Endor)
Imperial Stormtrooper
Incinerator Trooper
Jar Jar Binks
Kuiil
Luke Skywalker (Endor)
The Mandalorian
Mandalorian Loyalist
Mandalorian Super Commando
Phase I Clone Trooper
Phase I Clone Trooper Lieutenant
Princess Leia Organa (Endor)
Range Trooper (Holiday Edition)
Remnant Stormtrooper
Rey (Dark Side Vision)
Sith Trooper (Holiday Edition)
Speeder Bike, Scout Trooper, & The Child
Teebo (Ewok)