Barbecue's Ramblings: 10 Members of the Vintage G.I. Joe Team Who Would be Awesome in G.I. Joe: The Classified Series 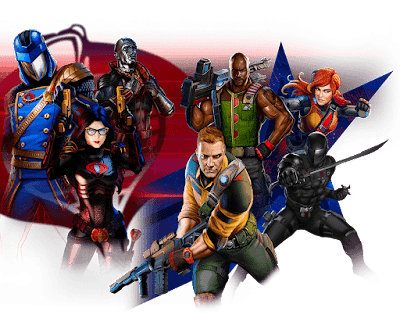 Despite 2020 being a dumpster fire in so many respects there were actually some bright spots for popular culture in the year, one of those being Hasbro's G.I. Joe: Classified Series. It was easily one of the hottest lines of 2020 and, despite being a line I had no intention of collecting when I first heard about it, it's definitely become one of my favorites. For the most part the releases of the G.I. Joe team members in 2020 have been the usual crowd you'd expect: Duke, Scarlett, Roadblock, Gung-Ho, Beach Head, and Snake Eyes. Those characters were all part of the first two series for the 25th Anniversary line and they've appeared multiple times in movies and shows like G.I. Joe: Resolute. Hasbro returns to them quite often and the next Joe team members we know about, Flint and Lady Jaye, are also old standbys. Of course you know Stalker, Shipwreck, Spirit, and the rest of the main crew are inevitable, too. We're going to get through the main characters pretty quickly, so Hasbro will hopefully dive deeper into the ranks of the Joe team rather than release multiple variants and repaints. Who would make incredible figures in the Classified Series? These are my picks from the vintage line to bolster the ranks of the G.I. Joe team in the 6 inch scale.... 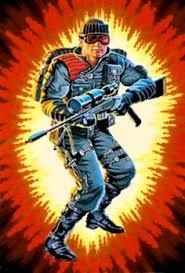 Originally released as part of the 1986 series of figures Low-Light has always been one of my favorites and would probably be my first choice for inclusion in the Classified Series. Clad in black and grey with a bevy of weapons, Low-Light just looks dangerous and he would make an incredible addition to the cutting edge/slightly futuristic feel of the Classified Series. The Pursuit of Cobra line gave us an incredible 1/18th scaled Low-Light but I think the Classified Series could do better. Imagine him with a modern sniper rifle with an array of scopes and gadgets and some extra silenced weaponry for when he needs to engage in some CQB to reach a target. This guy could be absolutely chilling!

2. Chuckles
From 1987 I would love to see Chuckles, the undercover operative. Hasbro and the G.I. Joe Collectors Club did some interesting things with Chuckles over the past decade or so and I really think the Classified Series could take the concept further. I'm envisioning Mission: Impossible styled gadgets galore packed with this guy plus lots of concealable weapons. The Hawaiian shirt? It may need a bit of an update but I'd still like to see a casual looking figure who could blend in anywhere but who can easily convert to a field operative. maybe a removable flack jacket hidden in a satchel or something?

3. Hit & Run
One of the 1988 figures, Hit & Run would be a stellar addition to the team. So far we don't have a lot of camouflaged outfits in the Classified Series and Hit & Run could really be decked out in some modern camo, perhaps even with some elements of a ghillie suit to make him really blend in to his environment. Hit & Run has had a few modern releases with different color schemes (urban, Night Force) but something taking his vintage look with a more modern feel would be amazing. Think of the cool gear he could be toting around in his tote bag. Heck, a grappling gun of sorts would be a wicked addition to his kit. 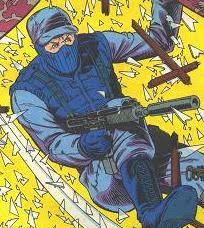 #4 Shockwave/ Shockblast
Another 1988 figure, Shockwave is another of my favorites that's not A-lister but who seems ready to jump into the spotlight. Renamed Shocklblast in the modern era (probably a rights issue), can't you see Hasbro doing a bang up job with Shockwave/ Shockblast? He wouldn't need many changes to update him. Give him a modern tactical shield, some excellent CQB weapons, and maybe a battering ram device and you'd be good to go. It would be really cool to see a modern SWAT inspired design in the Classified Series.  Honestly, the 1992 DEF Shockwave is one of my favorite Joe figures ever, so I'd be OK with some inspiration from that figure, too. 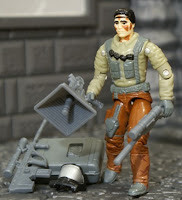 #5 Bullhorn
I couldn't find the package art of Bullhorn so I'm using this picture from the late, great Joe A Day. Bullhorn was released in 1990 and while I never had him as a kid I picked up a complete figure a couple years back and he's amazing. He's classified as an intervention specialist, which means he's a hostage negotiator. I could see this identity being reworked some to fit in with the Classified series but Bullhorn definitely deserves a place. He's so well made with some of the best accessories in the vintage line. Who wouldn't want this guy to give the team some needed backup when things get hairy and Cobra does something that goes public?

#6 Mercer v2
I'm using a picture from the incredible site JoeBattleLines.com as it's a great shot of the vintage Mercer v2 figure. How cool would this guy be in the Classified Series? A Cobra who has defected to the Joe team? Hasbro could really take this vintage design and inject even more personality into it. Mercer feels like a G.I. Joe design that was a bit ahead of its time and I think he's make an amazing updated figure. Go read Fred's review of this guy and tell me Mercer couldn't be a highlight of the line. 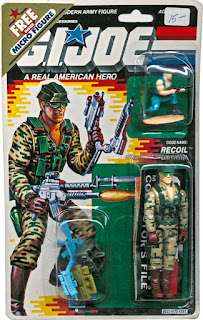 #7 Recoil
Recoil is one of those figures who isn't a household name and who didn't stand out because of any unique speciality, but man, was he loaded with cool gear. Recoil is a 1989 release who was a LRRP decked out in digital camouflage packed with various weapons. He's wearing web gear and a backpack both loaded with various types of grenades and he's carrying a case of mines with cord. This guy is absolutely geared up for an ambush! He also came with two rifles, one a standard military styled assault rifle with lots of attachment and the other a unique combination of a scoped pistol and grenade launcher. Imagine a modernly outfitted version of Recoil with some of the most unique and modern weapons the G.I. Joe team has access to? 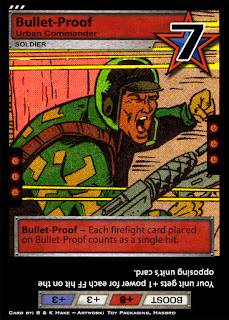 #8 Bullet Proof
Bullet-Proof was the leader of the D.E.F. (Drug Elimination Force) subset from the 1992 line and was one of the standout figures from that year. Part of the DEF and a Federal Marshall, it feels like there are so many directions Hasbro could go in with reimagining Bullet-Proof . He could definitely be geared up in something similar to the green and black outfits seen on U.S. Marshalls during hostile situations. Of course, he could also be given some more protective gear and used as a special operative for interfering with Cobra operations. With some of the camouflaged or law enforcement themed figures, or a character with "bullet" in his name, it's difficult to figure out what Hasbro is comfortable releasing right now, especially considering how they refer to the guns as "blasters." Still, Bullet-Proof could be a great inclusion in the Classified Series. 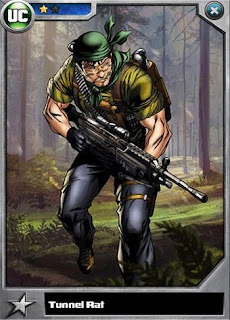 #9 Tunnel Rat
Tunnel Rat has appeared in quite a few "modern" G.I. Joe lines (25th Anniversary, Rise of Cobra, Sigma 6, Renegades) so maybe he's more likely than some of the other figures on this list but I'm still feeling the need to champion for him again. Considering the incredible accessories of the original figure and some of his cool features (the little flashlights that stored on top of his backpack were amazing, though quickly lost as a kid) I think he'd be pure dynamite in the line. Plus, he's always been a tribute to the great Larry Hama, so there's that, too. 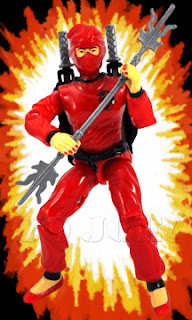 #10 Jinx
Last, but not least, let's put Jinx in here. I'd love to see Jinx reimagined a bit in the classified series, perhaps focusing more heavily on her intelligence role rather than her ninja role. I mean, she's still trained as a ninja, but I'd like to see more black mixed with the red. You know, something that resembles a more traditional super spy. Think the vintage Jinx meets Mission: Impossible meets Metal Gear Solid or something. Sure, she's gotta have a sword but let's also see some cool gear with her for going behind enemy lines. I've always felt that Jinx could be the team's primary spy behind enemy lines and this is a great chance for Hasbro to build her up.
What do you think? Which vintage G.I. Joe team members do you think need to show up in the Classified Series?