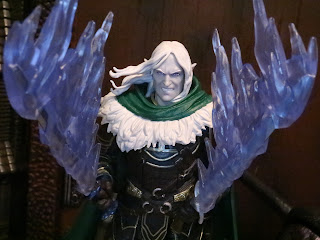 Fans of fantasy and swords and sorcery based action figures are currently living in a bit of a golden age. Besides the multiple Masters of the Universe lines out there you've got the Four Horsemen's Mythic Legions, Boss Fight Studios' Vitruvian Hacks, the various Conan figures from both Super7 and Mezco, and now Hasbro may be entering the fray with Dungeons & Dragons Forgotten Realms. Hasbro has owned Wizards of the Coast since 1999 meaning they've had over 20 years to put out toys and action figures based on Dungeons & Dragons and Magic: The Gathering. Finally Hasbro seems to be mining at one of these properties as a two-pack of Drizzt Do'Urden and Guenhwyvar has been released as a Hasbro Pulse exclusive. I'm a big Dungeons and Dragons fan and had an active group up until the pandemic his last year but I've never actually read any of the novels so I'm only familiar with Drizzt simply due to how popular he is. Like with last year's deluxe Snake Eyes from the G.I. Joe Classified Series Hasbro seems to be kicking things off here with a deluxe release that went up for preorder a few months ago to drum up excitement. Unlike with the G.I. Joe Classified Series, though, there hasn't been any concrete evidence yet that this set is anything more than a one off release. Will we get a full line of mages, monsters, and marauders from the world of D&D or is this a one off novelty for fans of the books? Maybe that will be answered in the weeks to come since Toy Fair 2021 isn't happening this year. For now, let's check out Drizzt & Guenhwyvar after the break... 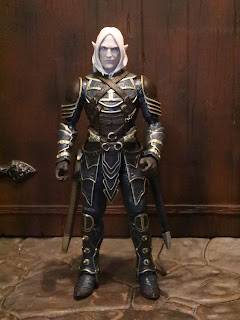 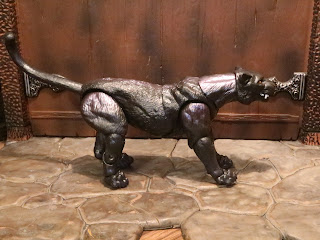 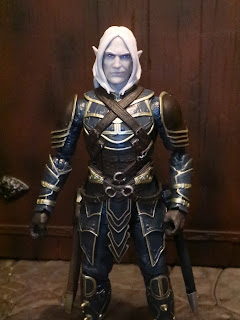 * If you're going to compare Drizzt Do'Urden to another Hasbro line I'd say he reminds me of a Star Wars: The Black Series figure. Slimmer, more realistic proportions with similar articulation. Drizzt is wearing a rather complex armored outfit with lots of belts and straps to hold his gear and such in place. The paint work is incredibly nice and there's a lot of paint detail and sculpted texture on his gear. 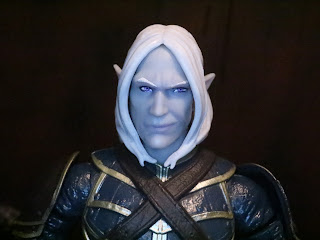 * Drizzt has two interchangeable head sculpts, the first of which is a more neutral expression. There's a lot of personality in the sculpt and Drizzt is clearly giving a bit of a smirk which adds some ore character to the portrait. I really like this one although I have seen some complaints that the skin tone is too light. I like the shade used here but I agree that some folks make have an issue with this depending on what artist interpretations they prefer. 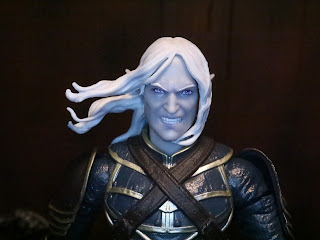 * The second headsculpt features Drizzt with a really angry look on his face and some seriously windswept hair. This guy is ready for a fight! Hasbro did an excellent job of capturing the differences in the facial movements between these two expressions (look how his cheeks are more pronounced with his teeth showing and how his eyebrows are arched). This looks great in a battle pose with his two swords. 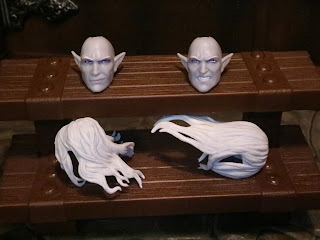 * One of the coolest features of this set is that Drizzt's heads have removable hair. Want Drizzt to have an angry expression with normal hair or be wearing his smirking face with his hair blowing in an icy breeze? Just swap the hair pieces around! This works really well and gives you a few more ways to display the figure. Nifty! 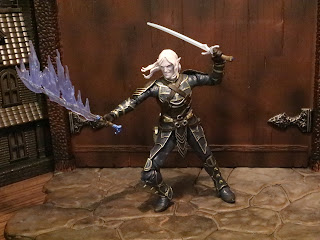 * I mentioned that Drizzt's articulation is a lot like a Star Wars the Black Series figure but I guess you could compare it to a G.I. Joe Classified Series figure, too. I've never owned any of the Power Ranegrs or Ghostbusters figures, so I can't compare them. Drizzt has lots of articulation, though, and he feels like a solid, durable figure. Hasbro does an excellent job of hitting the perfect middle ground between toy and collectible and Drizzt should please all but the most critical fans of articulated playthings. 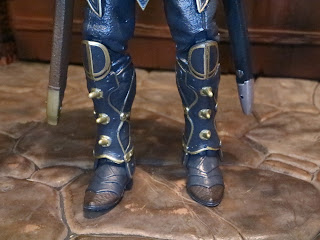 * He's got some serious boots, too. They're not his main weapons but they sure as heck look like they could be. Imagine getting kicked in the jimmy while Drizzt is wearing these things? Yikes! 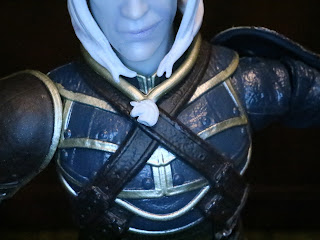 * Drizzt includes a necklace of the deity Mielikki which you can place around his neck once you pop off his head. It's a simple piece, just a "gold" band with a unicorn head charm on it, but it is a cool nod to Drizzt once being a follower of the goddess. 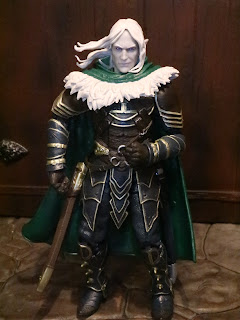 * Since Drizzt spends a lot of time in cold, icy places he's sporting a cloak. You just pop it over his neck when his head is off and it fits over his shoulders like a charm. It's a pretty common look for Drizzt from what I've seen so it's a great addition to the set. 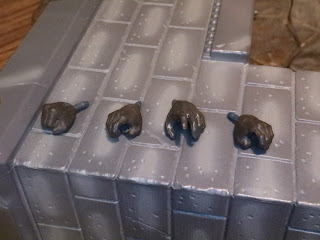 * Drizzt comes with four interchangeable hands: A right handed fist, left and right hand sword grips, and a gesturing/ spell casting right hand. They swap pretty easy and give you a nice amount of customization options. 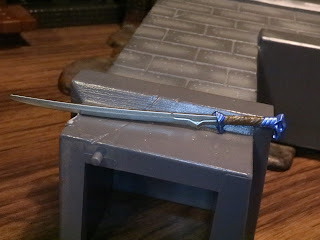 * Drizzt comes with both of his mythical blades, the first being Icingdeath, a +3 frost scimitar. It's a cool look blade with a really nice hilt. There are some very sharp paint applications on this that really set it apart from most other 6 inch scaled swords. 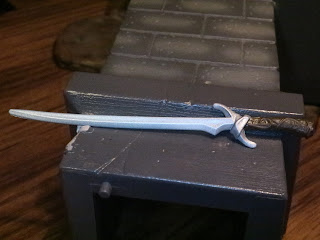 * Twinkle is an Elvish blade that glows blue when danger is near (kind of like Sting from The Hobbit and The Lord of the Rings) and which is also supposed to be empathic in some way. It's a scimitar as well but it's rather different look than Icingdeath, so you can tell them apart.

* Of course, each sword has a sheath that they fit nicely into as well. 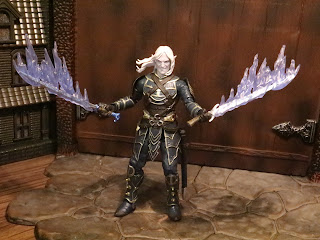 * Just to make him look pretty awesome Drizzt comes with two ice effects that can fit over Icingdeath and Twinkle. The blades simply slip into these and, voila, you have a magical ice attack! 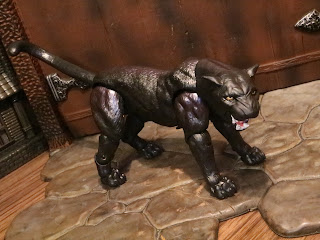 * This set doesn't just come with Drizzt; Guenhwyvar is in here, too! She's a massive black panther and looks pretty cool next to Drizzt. The sculpt is pretty good and she's got some cool metallic purple paint highlights on her to help give her a splash of color. I like it although it made  tough to get a decent photograph of her. 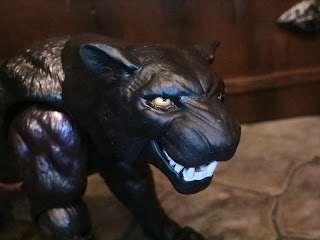 * Guenhwyvar looks a little more animated than Drizzt but overall it's a pretty cool sculpt. Her eyes are pretty menacing for sure! Look at that piercing gaze! 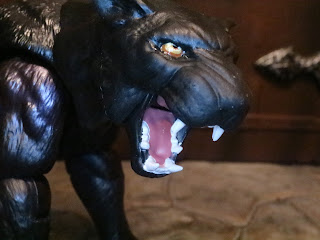 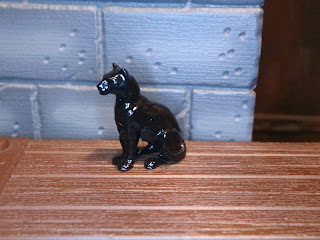 * Guenhwyvar lives on the Astral Plane and is summoned via an onyx Figurine of Wondrous Power. It's pretty cool, then, that Hasbro included the figurine in the set. It's very glossy and makes for a cool trinket to display next to Guenhwyvar. 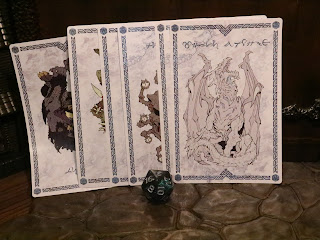 * Hasbro also included a slightly oversized 20 sided die and a set of 6 small art prints in the package. I lie the inclusion of the D20 as it makes for a great physical link between the toy and the game.
The Negatives:
* The art cards look cool but they're made from a very flimsy paper. Simply putting them on cardstock would have been a better option, wouldn't it? 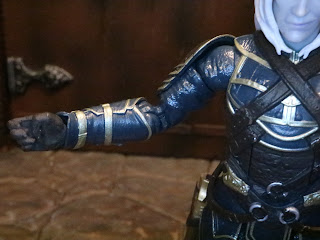 * Overall I like Drizzt's articulation but he does have some sort of rubbery elbows. I thought Hasbro had phased those out as they haven't been an issue in Star Wars: the Black Series for a year or too or at all in the G.I. Joe Classified Series but poor Drizzt has them. They aren't gummy rubbery or anything but far more rubbery than I would have hoped for. 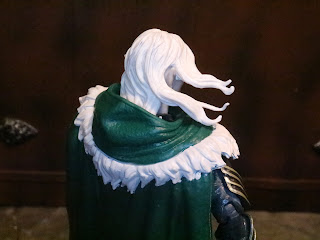 * Drizzt's hair tends to rub against the back of the cloak which means it's more difficult to get him in decent poses while wearing the cloak. It looks like Hasbro tried to sculpt the hood in such a way as to leave room for the hair but it didn't work out quite right. 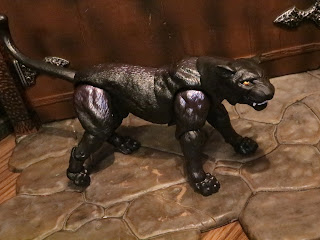 * While Guenhwyvar has some fantastic leg and head/ neck articulation it's all kind rendered useless by her hips. They're ball joints but there is so little motion in them, especially the rear hips, that I thought the rear legs were just swivels. It's a good first attempt but I know something better could be worked out for sure. 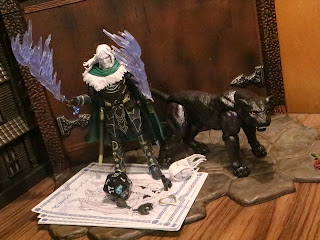 It's always interesting to review the first figure in a new series (assuming that Hasbro intends to continue this) and overall I'm quite excited by the prospect of a Dungeons and Dragons toyline. Drizzt is amazing and a really well done action figure with some fantastic accessories, solid articulation, and the very cool feature of swappable hair. Guenhwyvar isn't bad but her quality just feels far inferior to what Drizzt offers. She seems like kind of a afterthought, you know? This is still a Great set and well worth picking up for fans of the property and the character or just for fans of fantasy toylines in general. Hasbro definitely loaded up the set, especially considering you're getting two articulated figures here, so the value is there. I'm really curious how this line would work, though, as I imagine that most creatures and such would require unique molds. Of course, since Hasbro owns the property outright, relying on reuse might not be as big of an issue as it is for many other toylines. I like the inclusion of the D20 as well and it would be quite cool to find a way to connect the figures with Dungeons and Dragons. Maybe include a character sheet or enemy stat card along with a unique D20 with each release? A pre-painted miniature would be cool as well, although I wouldn't want those things at the expense of accessories. It feels like there should be lots of overlap between toy collectors and D&D players and it still astounds me that Hasbro hasn't tried a toyline previously (the Advanced Dungeons & Dragons line from the 1980s was made by LJN). Hopefully it's the right time to start a new epic fantasy toyline!
These are the first toys of Drizzt Do'Urden and Guenhwyvar I've reviewed on the site.