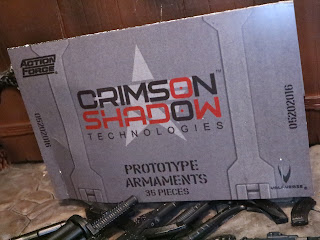 A week or two ago Valaverse put up the Prototype Armaments set of 1/12th scale weaponry for their upcoming Action Force toyline. What's Action Force? I'm not terribly familiar with it (and only know of it in relation to G.I. Joe) but Action Force is essentially Europe's answer to G.I. Joe. In 1982 Palitoy began releasing 1/18th scaled military figures inspired by Action Man, just like Hasbro did with G.I. Joe: A Real American Hero. Eventually Hasbro took over and the Action Force elements were merged into G.I. Joe. Over the years, particularly in a few 25th anniversary sets and G.I. Joe Collector's Club produced sets, Hasbro has added some of the Action Force characters and costumes into the G.I. Joe line. In 2019, however, the Action Force brand was purchased by Bobby Vala, a former Hasbro employee, and now the newly founded Valaverse is producing Action Force as a 1/12th scale toyline similar to the G.I. Joe Classified Series. Originally a Kickstarter project currently Action Force has comic books, art prints, and lots of figures available for preorder. As far as I'm aware this is the first actual toy product related to the line and I was quite curious to see the quality of these weapons. I'm happy to say that these are some excellent 1/12th scale firearms that are compatible with a variety of 6-7 inch scaled toylines. Let's take a look at these after the break and see what the Prototype Armaments set can do to equip your troops.... 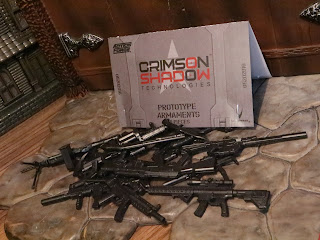 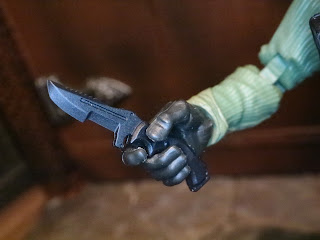 * First let's take a look at the knives! This is the smallest of the knives and it's a great tactical knife that works well on most figures. I've got G.I. Joe: Classified Series figures helping me to show these off today as I imagine that's what most collectors will be displaying these with, along with weaving the Action Force figures into their displays. The detail on these weapons is great with crisp, clean elements. The plastic quality is also really good. These feel very sturdy. They remind me of the Marauders Inc. weapons in that they're solid, and not at all rubbery but not brittle, either. 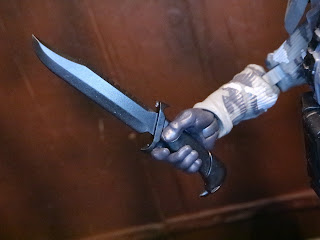 * Next up this a much longer knife. This one has kind of a flared blade and an unusual guard. This would work well with larger characters and slightly larger figures, like Marvel Legends, as well. 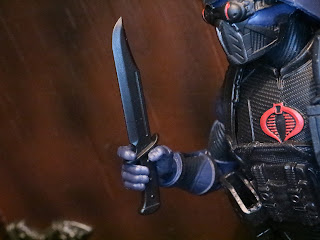 * Here's another large hunting knife that looks like a Bowie knife. Again, little elements like the visible pins and rivets in the handle really show off how high quality these sculpts are. 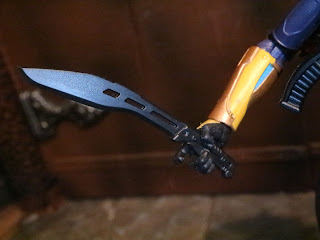 * Next let's get into the melee weapons included i the set. There's a kukri (or a small machete) which fits really well with characters with a smaller grip. The G.I. Joe Classified Series females look excellent with this. It's a very modern, tactical weapon with lots of little details, such as the jimping on the spine, that show this is a modern piece of equipment. 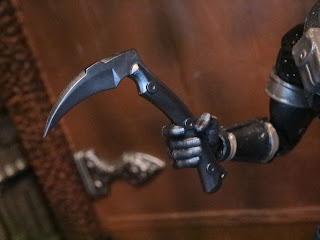 * Need something sharp and nasty for some close quarters combat? How about this wicked kama? It's very sharp looking! That blade is lit. 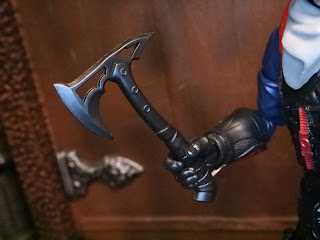 * If you need a versatile hatchet for your troops this set includes one. Again, it's a very modern looking hatchet that could be used as a survival tool and as a melee weapon should the need arise. 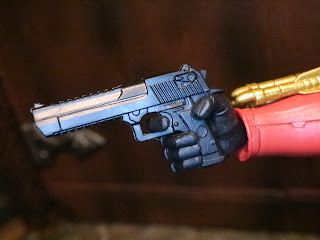 * Let's move into the firearms now and start checking out the pistols. First up is what looks like a Desert Eagle. This is an excellent sculpt with lots of detail. It's a bit heftier, which fits the Desert Eagle but also makes it a good handgun for slightly larger 1/12th scale figures. There's a hole in the barrel which can be used to attach firing effect piece, although none are included with this set. 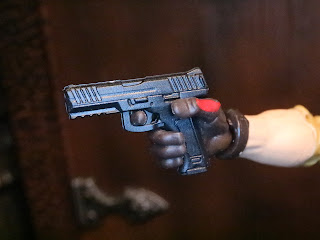 * The second pistol is a more regular sized firearm that looks kind of like a H&K USP to me. It's an excellent sidearm for more figures with a very functional grip that looks great in the hands of almost any figure. 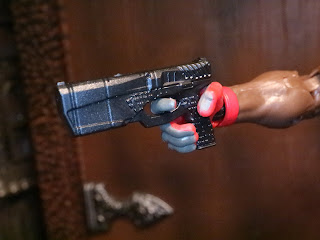 * I'm really not sure what type of pistol this model is based on but it looks very modern, perhaps even a bit futuristic. It's a bit larger, too, and should work really well as a standard sidearm for larger characters or Marvel Legends, as they tend to be a bit bigger than some 6 inch lines. 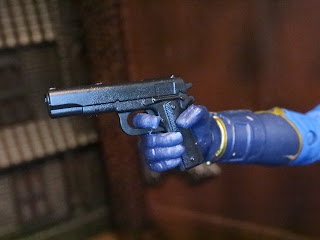 * Need a standard 1911? That's what you've got here. Simple, elegant, and reliable. I know Valaverse intends to focus on unique figures in the Action Force line but I do wonder if they'll ever offer up weapons for sale like Maraduers Inc.? I could see these being pretty popular. 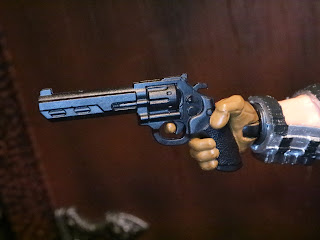 * Last up is my favorite pistol from the set: A massive revolver that brings some big-bore firepower to our 6 inch scaled figures who can handle it. This is gorgeous and I love the details on the cylinder and the barrel. 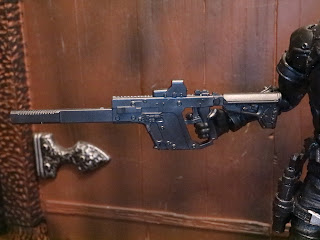 * Let's jump into looking at some SMGs now, starting with the KRISS Vector. Wow! This is an amazingly detailed weapon that has been nicely modified. What's with that crazy long barrel? I like it but it's a bit unusual. Is that a suppressor? 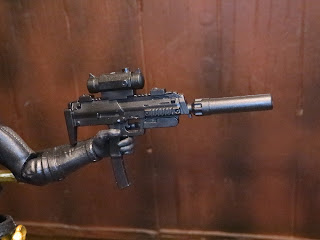 * The second SMG in the set is an H&K MP7 with an extended magazine, suppressor, and a scope on top. This is a great looking weapon for a variety of figures though it'd be cool to have a removable suppressor. I should point out that all of the SMGs also have the hole in the barrel to attach weapon firing effects. 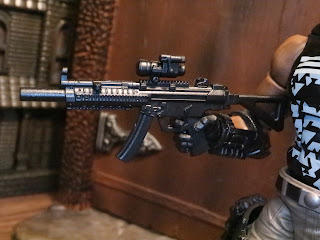 * Last up is a modified H&K MP5 with a side folding butt stock, a scope, and a suppressor. This is definitely a weapon I could see folks wanting to stock up on for their Joe teams as well as S.H.I.E.L.D. agents and other 1/12th scale tactical teams. 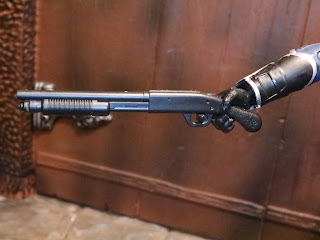 * There is only one shotgun included with this set and it's clearly a modified pump action shotgun designed to be a backup weapon. It has a short barrel and no butt stock. It looks great with any number of figures though I'd love to see a few more models in the future. 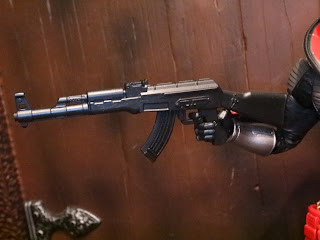 * Now let's move on to rifles! First up is an AK styled rifle, a more modern AK-100 series rifle? It's a great piece of gear for your enemy minions and it has a removable magazine. 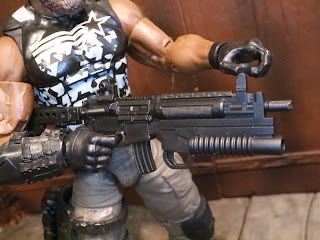 * Next up is something that resembles an HK416 with an under the barrel 40mm grenade launcher. This is a great standard weapon for any of your teams and I could see the G.I. Joe squad using these. There are so many nice details on these and I'm anxious to see how they look with a few painted details when he main Action Force figure are released. Take note that the magazine is removable here as well. 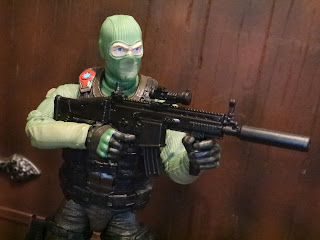 * Another great standard assault appears to be the FN SCAR. This is an excellent sculpt with a scope on top, a suppressor, a removable magazine, and a forward grip. Doesn't Beach Head look happy wielding this bad boy? 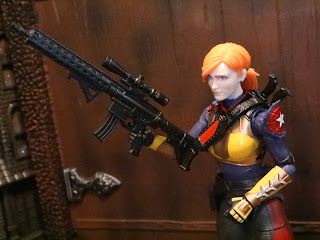 * This might also be a variant of the HK416 modified to be a marksman's weapon. It's definitely backing a longer range scope and an enhanced barrel. There's no true sniper rifle in the set so this is the closet you're going to get at this point. It also has a removable magazine that's interchangeable with the previous two firearms. 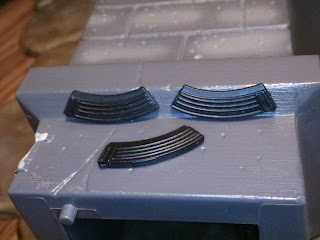 * The set comes with three magazines total for the AK. 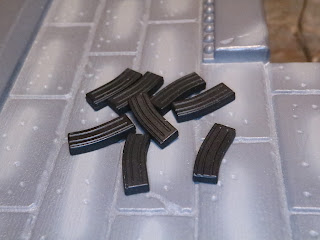 * You also get nine magazines for the other rifles. Yeah, I've only got 8 in this picture. I forgot to take one out of one of the guns. 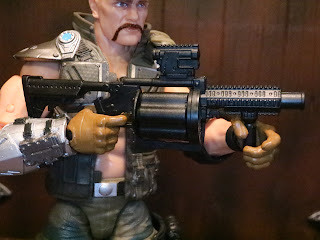 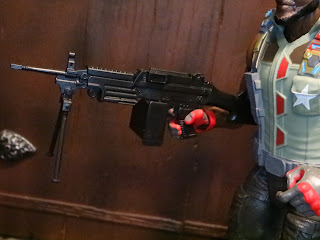 * Last up is an M249 light machine gun with a removable box magazine and a functioning bipod. It's not anywhere near the size of the weapons Roadblock usually uses but it's a solid weapon for him. 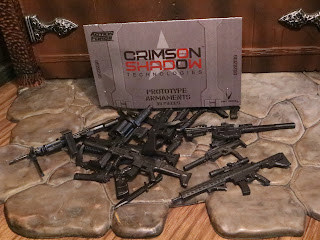 With 21 weapons (and a handful of additional magazines) for $30 dollars, the Action Force Prototype Armaments set is a great way to get some new gear for your troops or simply get yourself pumped for the actual Action Force figures coming soon. I'm quite excited for them and I think they'll nicely complement the Classified Series. The weapons in this set have awesome detail and are super high quality. This is an Epic set and I can't recommend it enough. You should find plenty of uses for the gear contained here. Valaverse plans to release more of these sets with painted weapons but if you want a sneak peak at these items this is the way to go.