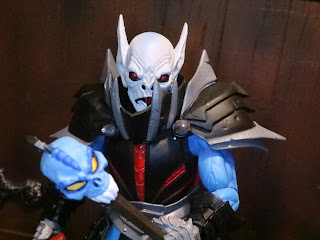 I really like the Four Horsemen's Mythic Legions line but I only pick up the Masters of the Universe inspired figures from and it's another one of those awesome homage figures that I'm checking out today. This time it's Lord Draguul, an ancient vampiric warrior who clearly is based on Hordak. Like Dorina Onoris (who is based on She-Ra), Lord Draguul was released in very limited numbers last year as a pre-release exclusive but the actual shipment of the figures just arrived a couple of weeks ago so I'm counting this as a 2021 release. The Four Horsemen have a long history with the Masters of the Universe brand so it just makes sense that they would continue to pay tribute to it through Mythic Legions. The Mythic Legions line honestly feels a lot like MOTU as it's based on characters with shared parts differentiated by unique color schemes and their allegiance to various factions. Being a fantasy based line in scale with Masters of the Universe Classics, AKA the greatest toyline of all time, the similarities are right in your face. Still, the Mythic Legions line feels a bit more high fantasy than MOTU's Barbarian/ sci-fi/ fantasy feel, so it does have it's own distinctive flavor. Let's take a look at Lord Draguul, an evil creature that seems to blend a MOTU character into the Mythic Legions world, after the break... 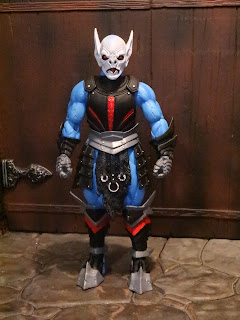 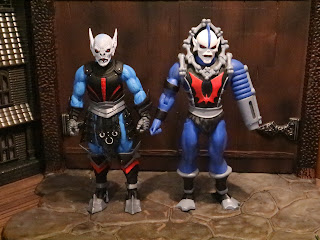 * Here's a quick shot of Lord Draguul (left) with the Super7 Filmation inspired Hordak (on the right) so you can see the color and design similarities between these two. I could almost imagine Lord Draguul being a "movie" version of Hordak, can't you? 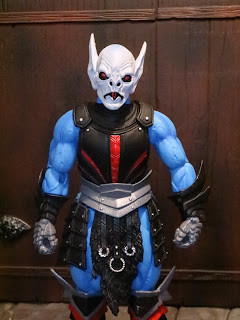 * Lord Draguul is a pretty cool looking figure. This is his basic outfit without any of the flourishes added on and it's a pretty standard fantasy outfit with chest armor and wickedly sharp bracers. The paintwork is really clean all around and the blue of Lord Draguul's skin is quite vibrant. It really does do a nice job of capturing the look of the Filmation appearance for Hordak. Like with most Mythic Legions figures I imagine most of the parts, if not all, are reused ( I think the gauntlets were used on one of the Orcs) but the colors and how they're assembled do make this feel like a unique figure. This guy is pretty intimidating for sure. 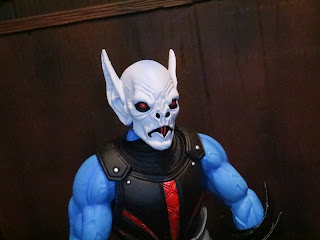 * Lord Draguul comes packaged wearing his helmet but it's his vampire head that looks the most like Hordak. It's a very creepy, very bat-like head with red eyes, red fangs, and grayish white skin. Again, it feels like a very high-fantasy take on Hordak and I think it's a slam dunk of a head sculpt. 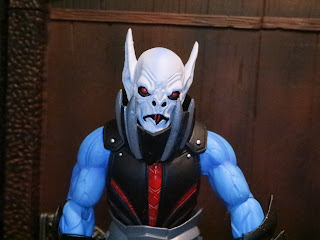 * There's a high spiked collar (not the safest fashion choice but one that makes a statement) that can be added onto Lord Draguul to give him a more regal appearance. it's quite cool and it looks good with both headsculpts, though it's easily removable if you want a better range of motion. 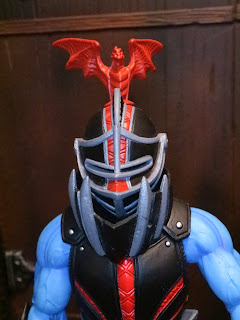 * Lord Draguul's helmeted head is really cool. It looks like a standard knight's helmet though a bit more ornate, especially due to the creature on top. Doesn't that kind of remind you of the creature the vintage Hordak figure toted around? If this is a reused helmet then it's amazing how well it worked out. Another neat thing about this helmeted head is that the colors match up with the helmet of the Masters of the Universe Classics Horde Prime from 2012. 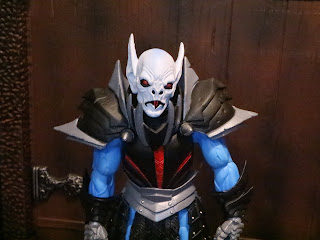 * When Lord Draguul needs to enter into some fierce fighting or join KISS on one of their farewell tours he has some rocking pauldrons that plug into the holes on his back. They're wicked looking and go really well with the armored helmet. 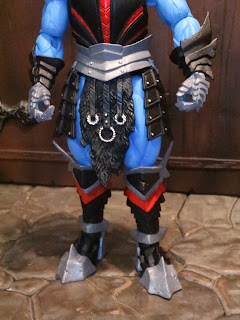 * Lord Draguul's boots waist gear are reused but they still look fantastic and fit in with the rest of the figure. He's very, very metal. 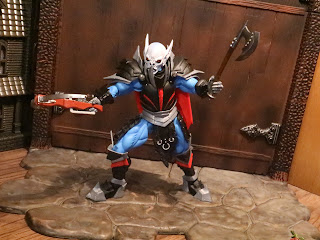 * While they feel different, the articulation scheme on these guys reminds me a lot of Masters of the Universe Classics and the various Super7 Ultimates releases. They're quite sturdy and I've found them to have good quality control thus far with improvements consistently made between each new series. Some of the extra armor pieces might be a bit restrictive but the base figure can take most poses you would hope for and looks great at ease or in various battle stances. 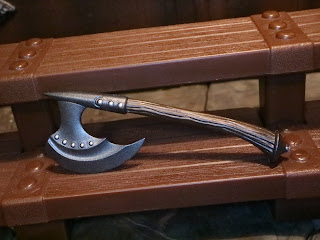 * Lord Draguul comes toting a cool bearded ax that has some really nice details like a wood grain handle and visible rivets holding the blade and such on. I would have expected a staff for sorcery for Lord Draguul but apparently he likes to get up in people's grills and sever some limbs and such. 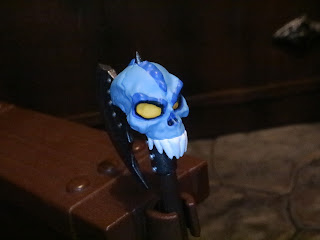 * Lord Draguul comes with a cool little blue skull with wicked teeth and yellow eye sockets. What's this for? Well, it turns out it actually fits over the back of the ax head to give the basic weapon some ornamentation. Why blue and yellow? Because this is clearly a reference to Imp from the Filmation She-Ra: Princess of Power cartoon! Is this Lord Draguul's Imp shapeshifted into an ax or did Lord Draguul get fed up with his companion and place his skull on the head of his ax? Maybe Lord Draguul talks to Imp, as in this universe he's a being no one but Draguul can hear? 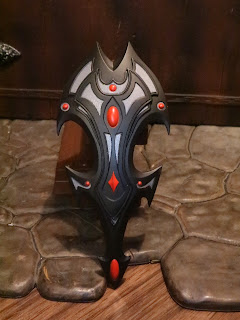 * Lord Draguul's shield is the same sculpt as the shield included with Purrrrplor but now it's black and red with touches of gray, colors more fitting with Lord Draguul's (and Hordak's) color scheme. It's a great design with a mixture of curvy edges and sharp points that looks very ceremonial. It's definitely befitting for the leader of an evil faction. 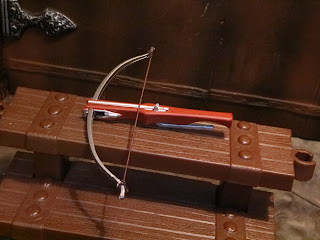 * Lord Draguul's final weapon is a crossbow. It's a very simple piece although it is nicely painted and has a real string on it. It's clearly a reference to the crossbow included with the vintage Hordak figure although a slightly different paint scheme would have been cooler to tie it in more with Lord Draguul's armor. Still, it's a really well done accessory. 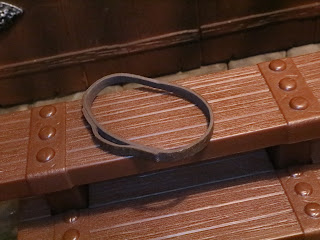 * Lord Draguul includes a strap that can go across his chest or be used as a belt. Most of the figures in the line come with this and generally it holds their swords or daggers. lord Draguul doesn't come with any of those thins but you can place the silver clip of his crossbow in the slit so he can tote it on his back. 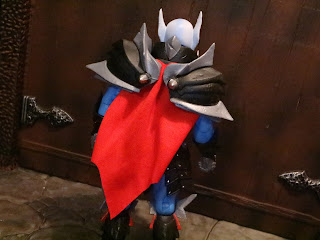 The Negatives:
* Lord Draguul has a red cape that looks nice but it's weird that you attach it by folding it around various pieces. It's needlessly complex and really just needs a simpler way of attaching it. 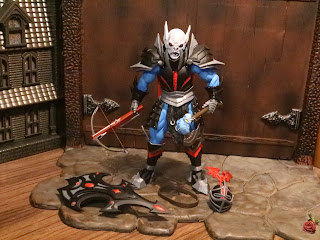 Lord Draguul is another Epic Mythic Legions figure. SSeriously, if you order these for the $35 asking price when they go on sale you're really getting what you pay for. They're a smaller, creator owned toyline delivered right to your door with lots of extras. Whether you intend to use him in your Mythic Legions collection or plan on working him into your Masters of the Universe collection as an alternate form of Hordak or another character entirely, Lord Draguul is a really fantastic figure and a great homage to one of the MOTU big bads.
This is the first figure of Lord Draguul I've reviewed. For more Mythic Legions reviews check out the following:
Cowarros
Dorina Onoris
Kronnaw
Malynna
Orc Legion Builder 3
Purrrplor
Posted by Barbecue17 at 2/16/2021