What's up everyone? I'm totally late this week because me and my dad were working on some renovations to one of the bathrooms at my house this weekend, so things were just busy. We're redoing my wife and I's bathroom and we did a lot of scraping and sanding all day Friday that left me incredibly sore. Way more work than I thought! Anyways, what's been going on this week? Glad you asked! 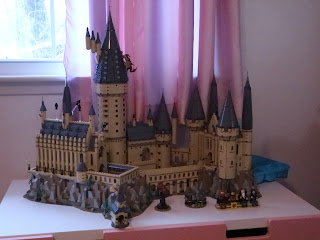 My daughter asked my wife's family for Lego shop gift cards and money towards the "Hogwarts fund" for Christmas and also sold off a few of her older toys, sold some Christmas decorations she made, and used some money she had been saving to purchase the massive Lego Hogwarts Castle 71043. This is in a micro scale so the microfigures are more the size of Micro Machines figures (they're the little pieces used as trophies and such on regular Lego sets). This beast has 6,020 pieces and we just finished it this week (we started it in early January). 37 backs of pieces, too! We may do a full review at some point.

More stuff after the break... 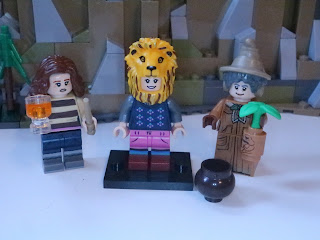 Speaking of more Lego Harry Potter stuff, I want to thank G.I. Jigsaw for sending some Lego Harry Potter minifigures to my daughter. She had lost her year 6 Hermione figure at some point and she really wanted Luna Lovegood with the Gryffindor lion hat and Professor Sprout, so this was a big surprise! Hermione has a glass of butterbeer, Luna has the Lion hat and an alternate hairpiece, and Professor sprout has a mandrake and a pot for it. 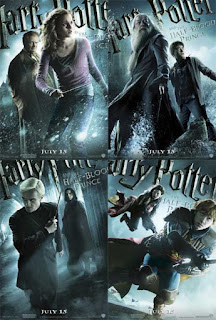 We finished the book Harry Potter and the Half Blood Prince last week so that meant that it was time to watch the movie. I actually had never seen this one before so it was interesting to view it for the first time. I thought it was pretty good and it covered most things nicely although I had some complaints. The good was that the cast was fantastic. The Harry Potter movies really do all have fantastic acting and this one is no exception. While the book spends a lot of time on the relationships between Harry, Ron, Ginny, Hermione, and their various romantic interests during the year, the movie spends less time but shows the developing relationships between Ron and Hermione and Harry and Ginny very meaningfully. I also like how the film spends a lot of time showing Draco Malfoy working on his plan to allow the Death Eaters to infiltrate Hogwarts and struggling with Voldemort's command for Malfoy to kill Dumbledore. It deepens Malfoy's character.

For the negatives, the movie completely skips over the scenes in the book where Harry uses the Pensieve and views Tom Riddle gathering the artifacts that will become his horcurxes and essentially becoming Voldemort. That was a huge part of the book and it's rather odd that it was skipped over with little to no mention of those elements. The cave scene, which always has stood out to me, was also very short and strangely edited. I felt the scenes where Harry converses with Dumbledore while crossing the black lake were vital but the movie just skips over them. Lastly, why did they leave out the battles in the Hogwarts corridors? It gives validation to the work of the DA in the previous film/ book and alludes to the fact that even without Dumbledore, the students of Hogwarts and the Order of the Phoenix are prepared. The movie adds in an action scene earlier in the film where the Burrow is attacked and set on fire which isn't a bad scene (it replaces Scrimgeour's visit to the Burrow at Christmas from the book) and it does add a fast paced scene in the middle, but it's weird to add in scenes when key scenes from the book are left out. It's a good movie with great acting, solid set design and atmosphere, but some odd scripting choices and editing at times. 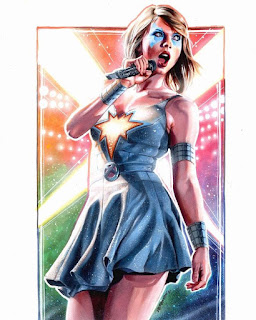 I'll talk about WandaVision more later this week but I wanted to share a cool image from Steven Defendini that I saw just a bit ago. It's Taylor Swift as Dazzler. Man, just when you think nothing could make the Marvel Cinematic Universe any better, right?

This week's installment is a bit shorter so I'll jump right to the top six most popular articles of the past week...

Kuiil from Star Wars: The Black Series is one of the newest Black Series figures out there and he seems to be pretty popular. Folks loved this character and it's cool to finally have him on the ever-growing shelf of figures from The Mandalorian. Kuiil turned out great and this is second week on the list.

Rey (Dark Side Vision) from Star Wars: The Black Series is a figure from the most recent series of Star Wars: The Black Series and she seems to be the hardest to find of the new stuff. Hasbro definitely seemed to put the brakes on the product for The Rise of Skywalker so I think we're fortunate this one made it out. Daisy Ridley + a red lightsaber = profit! This is her second week as well and she's getting more and more popular!
Jar Jar Binks from Star Wars: The Black Series is another brand spanking new Black Series figure. He's coming in cases all by himself which doesn't seem like a smart idea, though, but I'm not seeing him piling up anywhere yet. Is anyone else afraid that Hasbro's going to flood the market with Jar Jars yet again? We'll see. This is his second week on the list so maybe the Jar Jar fans are showing up in greater numbers than they have before.
Lords of Power from Masters of the Universe Origins was the 2020 PowerCon exclusive set based on the prototypes for the vintage MOTU line when the line was still going to be called Lords of Power. The set is on its fifth week on the list and while it was way, way too expensive, it's also pretty cool for fans who take interest in the development of MOTU. MOTU Origins looks like it's going to have a big year in 2021 and that very well may drive up demand for this set.

Fisto & Cliff Climber from Mega Construx Masters of the Universe is one of three smaller building sets that all come in a differently colored Skeletor heads. I love the concept and Fisto with the Cliff Climber, one of the lesser known vintage accessories, was the first set I found.

My Top 10 Toylines of 2020 is my annual list of my 10 favorite toylines of the past year and it's always a lot of fun to put it together and discuss the results with others.

Well, that's it for this week. Have a fantastic Valentine's Day and I'll see you later this week!