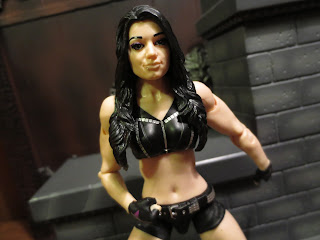 Are you a tougher critic of the things you love? I've been thinking about that lately as I've been contemplating a number of reviews I've written this past year and a few reviews I've been preparing to write. Take Paige, for example. If I weren't a huge Paige fan, I doubt I'd point out as many flaws in this figure. At the same time, I probably give most MOTUC figures higher reviews than I would for similar reviews because I love the property so much. Anyways, today I'm looking at the series 57 Paige from Mattel's basic WWE line. It's the second Paige figure Mattel has produced and it's largely based on the first version of Paige released earlier this year, a figure that I was kind of iffy about. Today I'm giving Paige a second go around. Have my thoughts on this sculpt changed much in the past few months? Join me after the break and find out.... 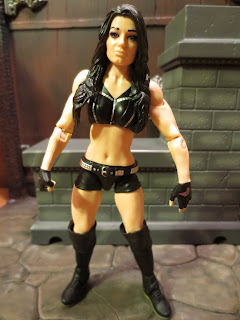 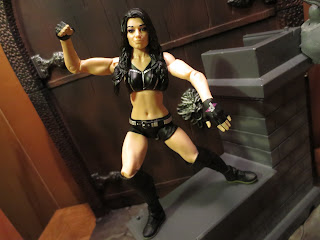 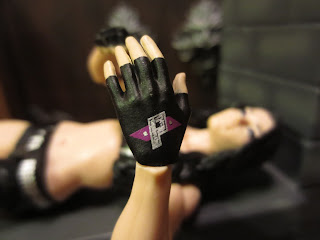 * The paint work on Paige's outfit is pretty sharp. It's mostly black but the silver highlights on her top and shorts look really good. I also really love the Paige "P" logos on her gloves. She doesn't have painted nails like the previous figure, but these look really cool. 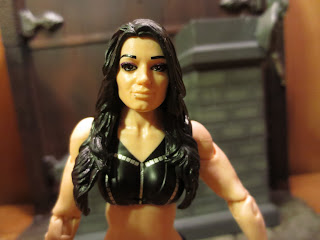 * While the eyes are much better than on the first figure, I still don't think this is a great Paige likeness. Mattel tried as there are some distinctive elements of Paige's face here such as the dimple on her chin and the stud below her right lip, but I think the problem here is that they tried too hard to add so many details that, due to the scale of the figure, it makes the face look unrecognizable. This just doesn't look like Paige to me. 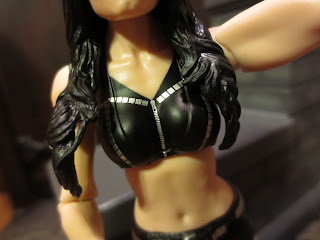 * If you look closely, you'll notice that rather than give Paige a uniquely sculpted top Mattel just painted Paige's top over a standard bikini top piece. Considering this figure largely reuses everything from the Elite #34 Paige, this seems like kind of a cheap move. 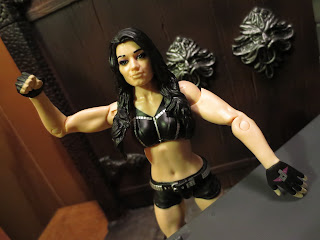 Considering this figure has better paint on the eyes, neater paintwork, and costs half the price of the previous figure, I feel like a better score is warranted. This is a pretty Good figure for $10. Paige has really made a name for herself over the past couple of years and this last year has definitely cemented her role as a major force in the Divas division. While I'm certainly hoping that she soon gets her revenge against Charlotte, I'm also hoping that Paige gets another go at the Elite scale. Paige needs a new Elite figure soon, particularly in her current look with the blue hair, the this is my house shirt, and the cool jacket with an improved headsculpt.

I've reviewed a ton of other WWE figures from Mattel, including: