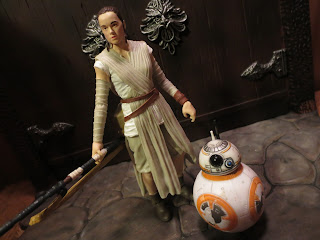 I hope you had an awesome Thanksgiving surrounded by family, friends, and loved ones and an epic Black Friday surrounded by other strangers willing to kill one another over an HDTV. Guess what holiday is next? Well, Hanukkah actually, if you're one of our Jewish friends. But after that? Yup, before Christmas there is another day that I'm anxiously looking forward to: The release of Star Wars: The Force Awakens. It really is amazing, isn't it? We're so close to getting another Star Wars film! To celebrate the release of The Force Awakens I'm going to be attempting to review a Star Wars toy every day for the next 17 days followed by a review of the film on December 18th. Can I do it? Let's hope so! Today I'm looking at figure from the first series of the Black Series Phase III: Rey in her Jakku oufit, accompanied by BB-8. Rey is the mysterious desert scavenger played by Daisy Ridley. Is she's Luke Skywalker's daughter? Han and Leia's daughter? Obi-Wan Kenobi's secret love child with duchess Satine Kryze of Mandalore? Well, we can rule that one out because it would make Rey around 50 which is clearly not the case here. Rey also comes packaged with the already beloved droid, BB-8. Two of the main stars from the new Star Wars film in one package. Who could resist? I couldn't, which is why you'll read the review I've written right after the break... 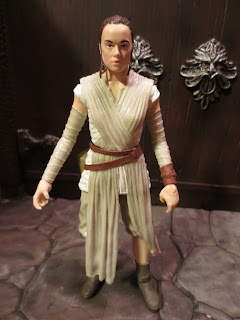 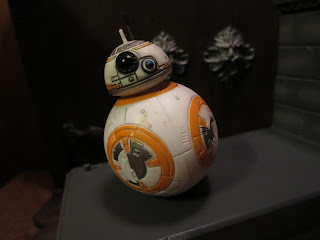 Height: 2 1/4 inches (not including antennae) 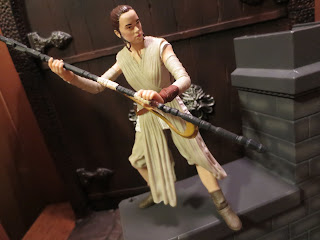 * While Rey's lower body is hindered a bit by her robes, her articulation really isn't too bad. Considering that we'll probably get at least one or two Rey figures down the line (apparently all merchandise released up to this point is only from the first 1/3 of the film) we might see her in a more combat styled uniform. Still, she's phone to pose in various ways using her cool staff to fight off other scavengers and First Order troopers. 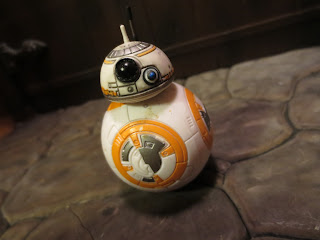 * If my daughter we're dictating this review to me, it would simply be line after line of: "BB-8, daddy! Watch BB-8!" Ever since we watched the second Star Wars trailer earlier this year my little one has been captivated by BB-8. She even dressed up like BB-8 for Halloween! BB-8 is an incredibly interesting looking droid and I'm amazed by how great of a job Hasbro did in capturing him/her in plastic (BB-8's gender seems to go back and forth in pre-release interviews and stuff) and that this pretty epic accessory comes with a whole other figure! 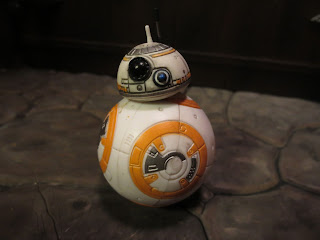 * BB-8 isn't just a solid piece of plastic: She/he has a really nice double ball jointed dome on top of his/her body. You can actually get some cool poses and, thanks to some internal weighting, BB-8 stands up pretty well on his/her own. I love the paint job on this figure! BB-8 is totally the reason this set, and I'm sure the reason many others have bought it, too. 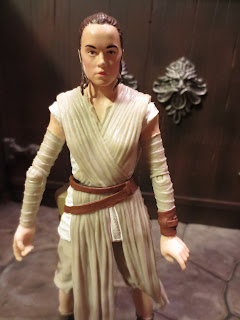 * The likeness to actress Daisy Ridley isn't perfect here but the figure certainly seems to capture one of her two looks quite well (I personally prefer her speeder look at this point but I'm sure we'll see that figure down the road). The costume is simple but seems very specifically tailored for her purposes on a hot, desert world. If you're seeing elements of Luke and Anakin's outfits worn during their youths on Tatooine then you're not alone. Whether we're being misled or we're right on the money, we're absolutely supposed to visually connect Rey to Luke Skywalker in the original film (and, yes, probably Anakin in TPM). The detail on her various wraps look great. My wife used this figure along with pictures of Rey to craft a pretty killer Halloween costume, I might add. 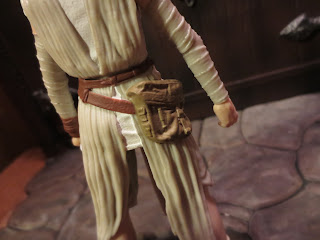 * While the overall outfit is a bit bland (though the same could be said for Luke's farm boy costume) there are a couple neat details. I love the large pouch attached to her belt. It seems very functional and utilitarian. It kind kind of reminds me of something she might have picked up at a military surplus store on Jakku. 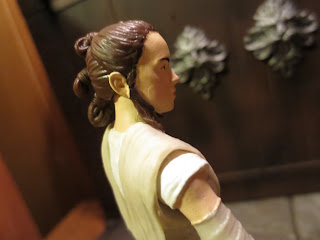 *Rey has a very cool hairstyle in the pack. It's nothing as elaborate as some of Leia's or Padme's hairstyles but it conveys the same kind of feeling. Is this some visual connection to her relatives? Is Rey Leia's daughter and Padme's granddaughter? We'll know in a couple of weeks, won't me? Anyways, I missed this detail initially but my wife made a Rey Halloween costume using this figure as a base and did her hair like this. 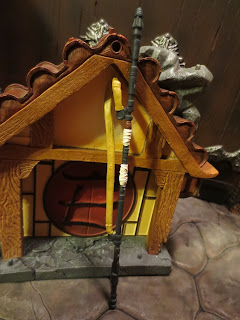 * There's nothing wrong with the staff itself. It's a nice accessory and looks great whether being carried with one hand or two. It's the strap that bugs me. It's not very functional. Unlike the shoulder straps on Bossk's weapon or the Sandtrooper rifles, this one is sculpted and made from a firmer plastic. A separate piece of more pliable plastic would have been a better decision. 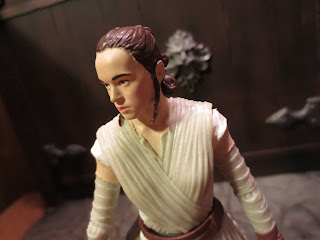 * The Black Series hasn't always had the best luck with human faces and Rey is another miss. She certainly doesn't look bad by any stretch of the imagination (unlike the single boxed Poe Dameron who likes like he's hopped up on PCP or something) but she doesn't bear a great likeness to Daisy Ridley. I think the hairline is a bit off. 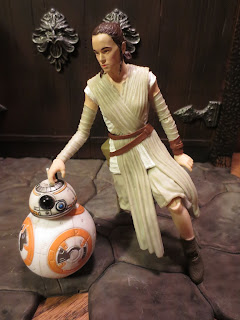 I still cannot express how exciting it is to have new Star Wars figures of characters I know nothing about. It reminds me of the lead up to Episode I and having piles of new figures to intermingle with my Power of the Force II and vintage collection. Knowing that The Force Awakens will move the story forward seems even more exciting, however, and it's cool to stand Rey on the shelf while only having limited knowledge about who she is.
My guess without knowing anything other than what is in the current novels and having seen the trailers? Rey is Leia and Han's daughter who was lost as a very young child on the planet of Jakku shortly before the battle of Jakku. She was always assumed to ahve died and her loss caused problems between Han and Leia. When Rey finally meets her parents, she'll learn that her real name is Jaina Organa-Solo. Oh, and she can totally use the Force and trains with her uncle Luke. Just a guess, anyways. While Rey's likeness isn't perfect, she's still a good figure. Throw in BB-8, however, and this set really skyrockets. This is a Great set thanks to the little droid's presence. What are your thoughts on who Rey is? Tell us in the comments section!


I've reviewed quite a few Star Wars: The Black Series figures, including: