A New Batgirl Review: Batgirl from The New Batman Adventures by DC Collectibles 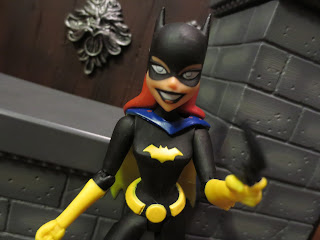 I've really liked the two figures I've purchased from DC Collectible's Batman: The Animated Series and The New Batman Adventures lines but I've held off from jumping into this line full steam ahead. Some early quality control problems in the line kept me from jumping in right away while the sheer number of Batman figures and higher end Batgirl collectibles available this year has forced me to be a bit more selective in my buying. I knew that I'd be buying Batgirl, however, and I just received her in the mail a couple of weeks ago. Based on her redesign from The New Batman Adventures, this version of Babs not only features a different costume but has a radically different body design than the Batman: The Animated Series version (which means that we'll hopefully get another Batgirl figure in this line soon!). Ready for a closer look at this Bruce Timm inspired Batgirl figure? Then join me after the break... 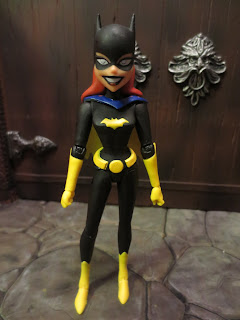 * While some of the early figures in the line had breakage problems, DC Collectibles seems to have gotten that under control. The articulation here is quite well thought out, complements the sleek Bruce Timm inspired design, and feels really sturdy. That's impressive considering Batgirl is such a small and slender figure. * So far all of the basic figures in this line have included display stands. Batgirl is no exception and the base of her stand features the TNBA logo as well as some turnaround art for the Batgirl character design. I like the clean, art influenced appearance of these bases. 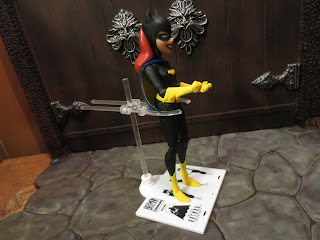 * Here's a shot of Batgirl using the stand. The stands are generic and are used with every character, regardless of height or body type, so sometimes they work better than others. This stand works pretty well with Batgirl although the way the ends of the waist clasp jut out in the back definitely takes up some room on a display shelf. 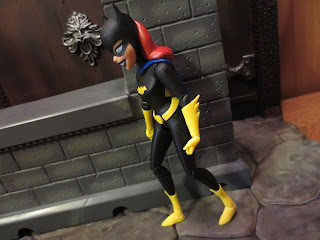 * I was trying to show off the body sculpt here but it kind of looks like Babs is doing the Ric Flair strut, doesn't it? Anyways, one of the most impressive things about this line is how faithfully DC Collectibles has captured the sleek, unique character designs from the animation. Batgirl has that slender, Bruce Timm drawn appearance that you just immediately recognize. 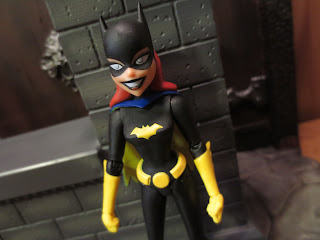 * The paintwork on her outfit is really nice. Sometimes black and yellow can be incredibly problematic but DC Collectibles did an excellent job here. The yellows look nice and bright and the separation between yellow and black is incredibly clean and even. 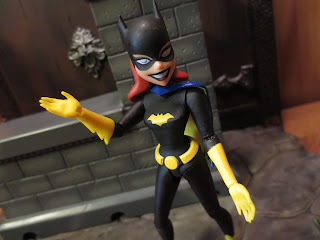 * I love the multitude of hands that Batgirl comes with! This has been an awesome feature of this line so far and it continues here as Batgirl has 10 interchangeable hands. They fit tightly but swap out easily with little fear of breakage. They really help to make her poses more unique and expressive! 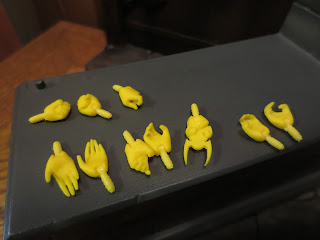 * Here are the extra hands Batgirl comes with. Each features a hinge joint and a nice, sturdy peg to hold them in place. The hands are: 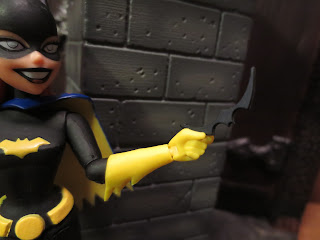 * Not only does Batgirl come with a batarang of her own but she comes with a hand specially sculpted to hold it. There's a small tab on the batarang which can fit into the grip of her hand, allowing for a pretty nice batarang throwing pose. It's not insanely tight and the batarang is extremely thin and small, so be warned! Still, it looks great and is incredibly functional! 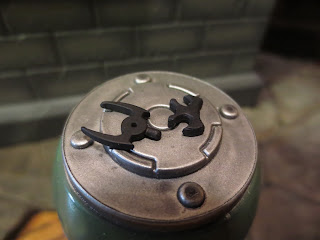 * Batgirl also comes with her grappling gun. It's made from two separate pieces but the hooked end can easily attach to the hand grip via a peg. It's small, so be careful, but it's cool to have some more awesome gear. * Since the grappling gun can be a tough accessory to wield properly, DC Collectibles included an alternate hand permanently holding the accessory. Unfortunately, the grappling gun isn't painted and is instead left the same bright yellow as Batgirl's glove. It's a minor oversight but a frustrating one. 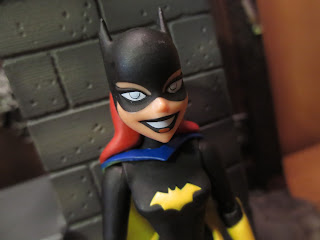 * Here's my biggest problem with this figure. While this is a beautiful sculpt, look at the eyes for a minute. Notice anything? DC Collectibles painted the area around the bottoms of the eyes black as if it were part of her mask while it is supposed to reveal the skin around her eyes, as seen here. This isn't a style decision but an inaccuracy on the part of the paint design. Cartoon characters have very specific appearances that get ingrained in your head and seeing something like this, particularly on a perfect sculpt, is like a punch in the gut. 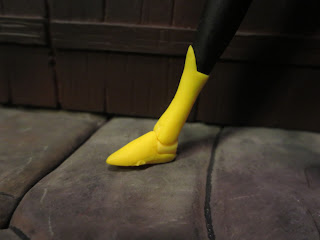 * My Batgirl has a weak ankle. Her right ankle hinge (not the lateral rocker) is a bit weak and has a tendency to cause the figure to tip forward or backward. Just a heads up! 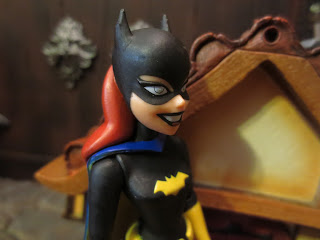 * This is more of an observation rather than a complaint but I felt it worth pointing out that Batgirl does not have much movement in her head. Her hair basically restricts any real movement. I'm surprised DC Collectibles didn't make the hair removable and include two different "hairstyles" for her. * You may have noticed this in a few of the previous pictures if you looked pretty closely, but now is the time to address the red paint rub from Batgirl's hair. Her cape and neck are covered with specks of red paint. What happened? Is this simple paint rub or was the hair assembled when it was still wet? Who knows but it's a huge quality control issue. 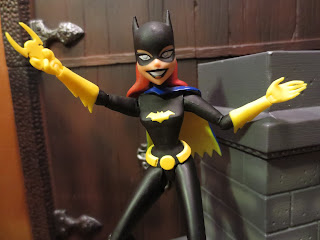 There is so much good here about this figure: The interchangeable hands, the awesome paintwork on the outfit, the beautiful sculpt, and the durable articulation. Unfortunately, there are lots of little things that detract from the nice work here: The paint bleed from Babs' hair, the yellow grappling gun hand, and the inaccurate eye-holes on the mask. This is still a Good and a half figure, bit it could have been so much better, and that's a real shame. Let's hope that DC does a bit better job when the inevitable Batman: The Animated Series version of Barbara Gordon roles around. That's one of my favorites and they have better not mess it up!

I have reviewed lots of Batgirl figures, statues, and collectibles, including:

I've also reviewed two other figures in this line: