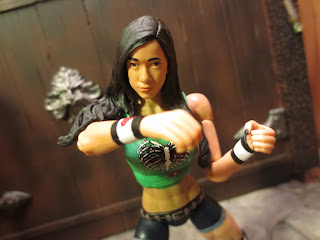 While the current version of WWE history credits Paige with starting the Diva's Revolution, you could absolutely make an argument that AJ Lee deserves some of the credit, too. While AJ Lee retired earlier this year and the WWE is reluctant to even mention her (and made sure that Nikki Bella surpassed one of her records as quickly as possible), Mattel still had this figure in the works and thus could be the last AJ Lee figure released for quite some time. Ready for a closer look at the Geek Goddess, the Crazy Chick, and the Black Widow herself, AJ Lee? Then join me after the break... 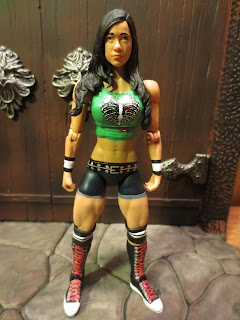 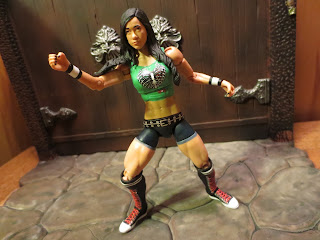 * As I've mentioned a number of times before, Mattel doesn't have separate articulation styles for the basic and Elite Divas figures; buy a basic Diva and you're basically getting an Elite figure for half the price. AJ is sturdy and has an awesome range of motion in her arms and mid-torso. Her mid-torso joint is one of the best I've ever seen, actually. 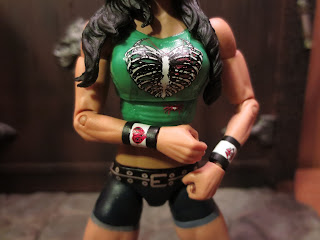 * Here's the exact shirt Mattel was using as a reference for this figure. It's a great look for AJ Lee and the paint work and printing is fantastic. The rib cage design is incredible as is the printing on her wristbands. While the belt and jean shorts are simply painted on, the paintwork is strong and really sells the look. 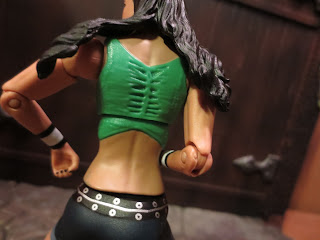 * Even the back of AJ's shirt has some interesting detail. It looks like she has done some creative stitching on the back of the shirt to give it a more snug fit that helps it to rest hire on her stomach and wrap more rightly around her chest. It also looks like the shirt is bunched up a bit more to expose more of her lower back. It's an interesting detail and I'm impressed Mattel included it here. 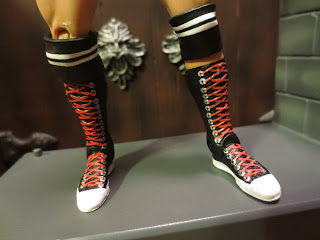 * AJ's boots look awesome. They're inspired by Converse Chuck Taylor's and the sculpt and paintwork on them is incredible. Mattel really went all out with this considering the fact that AJ Leeis a basic figure and not an Elite. 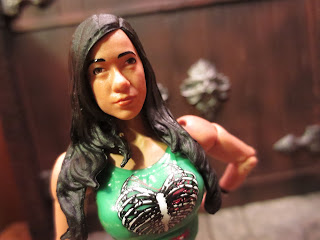 *My only complaint about this figure is that there is something not quite right with the likeness. It looks like AJ Lee but there's something off. I think the eyes are either too large or the nose if off. It looks somewhat strange in person. 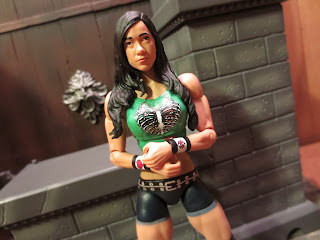 I'm not that huge of an AJ Lee fan but I couldn't pass this figure up, particularly when I got her from a Toys 'R Us sale for around $6. That's insane! I really think that AJ Lee might tie with the Elite series 37 Stephanie McMahon for best Divas figure of the year from Mattel's WWE line. While the facial likeness is a bit off, the rest of the figure is so good that I can kind of overlook it. This is a Great  and a 1/2 figure and definitely worth picking up if you can find her.

I've reviewed plenty of WWE figures from Mattel, including: