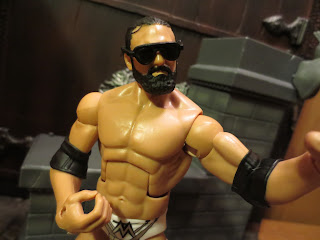 Are you ready for another WWE review? Today I'm taking a look at one of the newest figures from Mattel's WWE Elite Collection: The Series 39 Damien Mizdow! In 2014 Damien Sandow adopted the gimmick of being the Miz's stunt double. It was a pretty interesting gimmick and made for some very entertaining confrontations (I loved their break-up at the Royal Rumble). Unfortunately, it kind of just ended and left Damien Sandow stuck. Well, he did do The Meta Powers with Curtis Axel for a few months, but that ended when Hulk Hogan got fired from the WWE in July 2014. In the meantime, enjoy this review of a figure that's basically a stunt double of another figure I already own. Yup, just like the actual Damien Mizdow, this figure is wearing the exact same outfit as the series 37 Miz which I reviewed last month. To really get the full effect, you need both figures! Read on and find out why after the break... 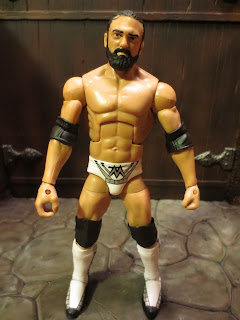 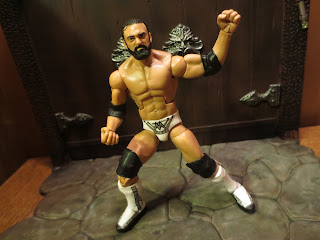 *The best part about nearly every WWE Elite figure I've purchased is that they're extremely solid and durable figures with great articulation. As far as I am aware, these figures have the best mixture of articulation and durability of any action figures on the market. They look great but they're definitely built to withstand heavy play. That's not something you can say about many lines targeting collectors, although things have definitely improved over the past 15 or so years. 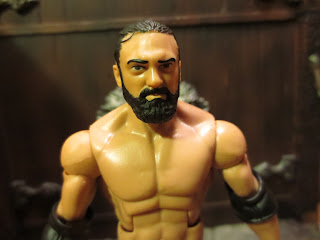 * Damien Sandow's likeness is captured pretty nicely here. He always has a rather intense expression and I think Mattel has portrayed that rather well. Wouldn't it be great to have a Vincent McMandow figure, by the way? Just saying. 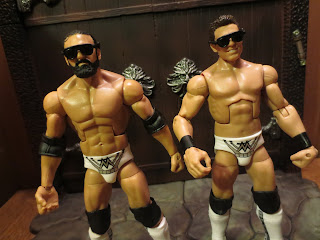 * I kind of like that these two figures really are almost exactly the same. I mean, it's a cheap trick, sure, but it's funny. While the boots, trunks, knee pads, and sunglasses are the same, the bodies are different. Oh, and Damien Mizdow is wearing elbow pads. All of the good things I said about the paint work on the trunks and boots in my Miz review are still true here. 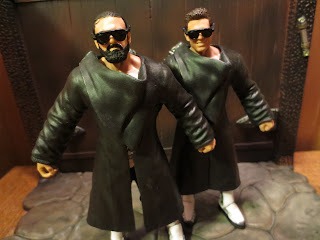 * Damien Mizdow comes with the same black plastic robe that the series 37 Miz came with. I really don't like the look of this acessory. It's far too stiff and leaves the arms hanging out at an odd angle. I loved the look of this outfit for those guys at TLC 2014 but it just looks too bulky here.
By the way, where are the belts? Part of the gimmick of these two as tag team champions was that Miz kept the two real belts and Mizdow carried two fakes? That would have been cool. 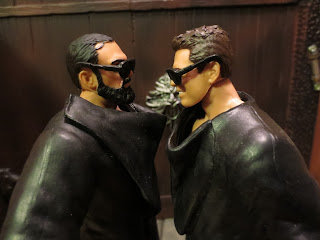 I'm giving Damien Mizdow the same Good and a 1/2 rating that I gave the Miz. The figure itself is excellent, as is the paintwork on the trunks and boots. It's just that #1 that weird jacket/robe is not executed terribly well and #2 since we've already received the Miz a few months ago this figure is tougher to get excited about. It's a nice tribute to a pretty funny story line but, if you're not familiar with the story line or a fan, it's just a Damien Sandow figure in the Miz's trunks.


I've reviewed a bunch of figures from Mattel's WWE line, including: