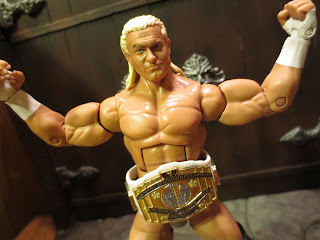 Is there a harder working guy in the WWE than Dolph Ziggler? I'm sure there are some guys who get more matches and do more publicity stuff but when Dolph gets in the ring he always goes all out. Seriously, Dolph Ziggler's matches are always frantic and fun. He's just an entertaining presence inside (and outside) of the ring. I was really excited that Mattel was releasing an updated version of Dolph in series 39 of their WWE Elite collection and I'm really excited that I manged to snag one so soon! Unfortunately, I have to admit that there are some rather odd problems with this figure. Let's jump right in and take a closer look at "The Show Off." Join me after the break... 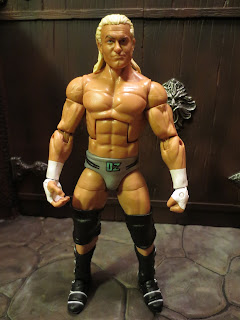 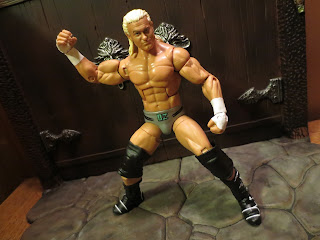 *I've reviewed so many of these figures and I can't say that I've been disappointed by the quality, durability, or articulation of any of the Elite figures released this year. Mattel just does an insanely good job with this line and they're incredibly fun figures to play with or pose on your shelf. You'll be Zig Zagging to your hearts content. 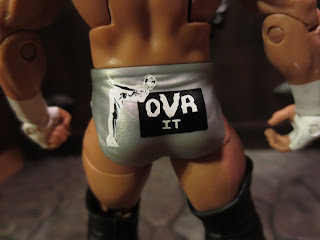 * Since Dolph's "The Show Off," no reason not to show off his trunks. These are based on his look earlier this year, maybe around January or February. The front has the green "DZ" logo while the back has an image of a woman bending over and the words "OVR IT." And yes, that's correct; Mattel didn't forget a letter here or anything. 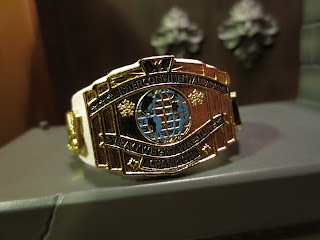 * Not only is it always cool to get a shiny wrestling title belt, but the Intercontinental hasn't been available with any other figure this year so far as I can remember. While Dolph's held it four times if I'm correct, some of you are probably wanting one of these for your Ryback or upcoming Kevin Owens figures. It's a nice piece that looks great on Dolph's waist. 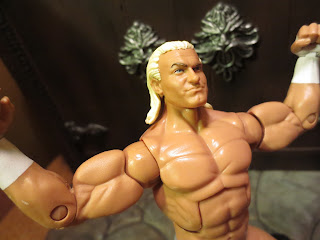 * So, you're probably wondering why it's taken me so long to get to the actual likeness of the figure. Well, that's because it's just not very good. There are a few things I like about it, though: The crooked smile and the cocked eyebrow definitely seem very fitting for Dolph Ziggler. The eyes are pretty perfect at capturing Ziggler's likeness. 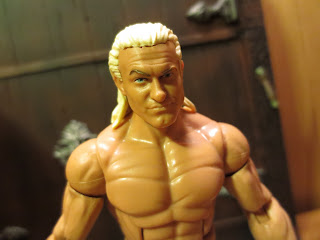 * I'm so conflicted because while the smile is right and the eyes are almost perfect, the nose is just terrible. I know Dolph's nose is a bit crooked, but he doesn't look like this. I really just cannot look past that nose. It's like he visited Triple H's plastic surgeon or something! It's not as noticeable in person but it does throw the figure off a bit. 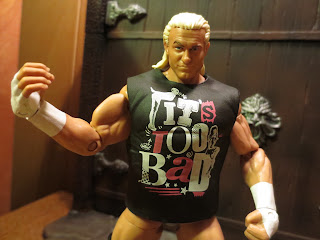 * I'm really not a big fan of these plastic T-shirts. They look decent on some of the larger figures like Brock Lesnar or Hulk Hogan, but they look really awkward on guys with smaller frames. I really would have preferred one of the actual cloth shirts here. This one just doesn't look good, and that's a shame because Dolph has a pretty cool shirt on. 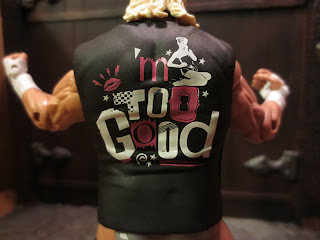 * I was going to rave on the printing on the shirt because, while the shirt itself is too large, the printing is very neat and clean. The drawback to using the cloth shirts is that the apparently can't be screen-printed on the back. Unfortunately, something is missing on Dolph's shirt.: The "I" in "I'm Too Good." Yeah, there's actually a missing letter there. No dea why that s but t's a lttle bt awkward, don't you thnk? 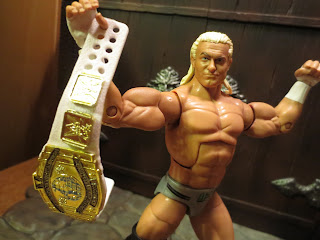 I really had high hopes for this figure. Considering it was a recent update of one of my favorite WWE Superstars with a cool t-shirt design and a title belt, I expected to be wowed. I'm definitely not wowed. The oversized t-shirt is disappointing but I can take that off (it's also missing a letter, too, which is really weird). The problematic headsculpt, though, isn't as easily fixed. It's not as good as it should be and that's a shame. While I know we'll get more Dolph Ziggler figures in the future (I really want his newer 1980s look in figure form), I was hoping for some "Perfection."

I've reviewed quite a few WWE figures from Mattel including: