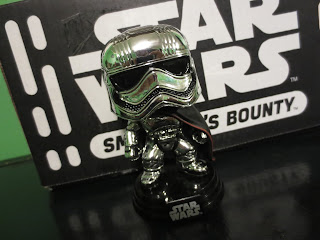 Let's be honest: Even though we know almost nothing about the character, there are probably a few fans out there already getting Captain Phasma tattoos because of how cool the character looks. That's Star Wars for you! Anyways, today I'm looking at a figure of Captain Phasma that was included as an exclusive in the first Star Wars Smuggler's Bounty blind box from Funko. I've done a blind box before (Loot Crate) and while I loved the diversity of items, very often I ended up with items from properties I just didn't care that much about. Smuggler's Bounty is all Star Wars, all the time., and I will pretty much take anything Star Wars I can get my hands on. Add in that my wife, daughter, and pretty much everyone in my life whom I respect all like Star Wars and I could pretty easily pawn off anything I might get that doesn't interest me. The Smuggler's Bounty box also ships every other month, so it's a bit more manageable than a monthly charge. While there was a good bit of cool stuff in it, the fact that it came with two exclusive Funko POP! figures seemed like a pretty sure bet that there's always be something cool inside. The Star Wars POP! figures are all bobble-heads, probably to skirt some legal exclusivity issue that Hasbro has on making Star Wars figures, so this is effectively a bobble-head of Captain Phasma. While there is a Captain Phasma POP! already out there, this one is covered in vac metalized chrome. Pretty special, huh? Learn more about this figure after the break... 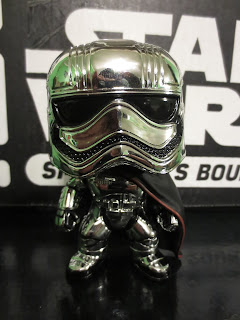 Non-Scalper Price: Included as part of the $25 Smuggler's Bounty box along with one other pop, a Stormtrooper lanyard, a First Order T-shirt, a Kylo Ren pin, and a TIE Fighter Pilot patch. 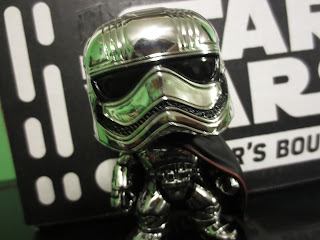 *Since Captain Phasma is so shiny, you might be able to catch a glimpse of me in the pictures! Of course, the shininess is the big draw here as Captain Phasma's chrome plated armor is what separates her from the standard release that's in stores right now. The sculpt is quite detailed (I like the texture on the "mouth") and the vac-metal chrome looks good overall. 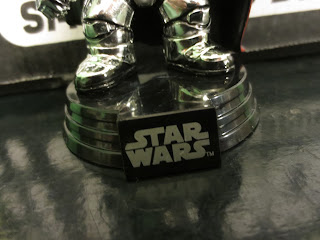 * I really do like the little bases the Star Wars POP! figures come with. My guess is that these are included to help keep the figures stable since they have bobble heads (unlike most other POP! figures). It's kind of cool looking, though, and I imagine that a collection full of these would have a nice, uniform look. The base is removable, however, so if you want them to look like almost every other POP! figure, that's completely doable. 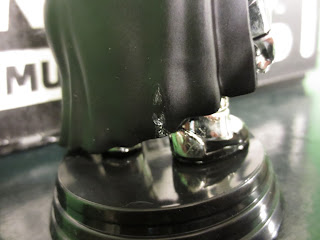 *There are a few places where the paint is a little rough. The back of the cape has some very clear paint scuffs that you can see in this admittedly not very good picture. 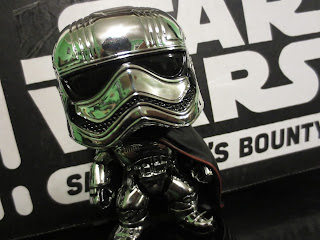 I'm actually not the biggest fan of vac metal myself (I know lots of action figure and toy collectors love it) but I like the look of it here. What I'm not liking, though, is the weird, brittle, hollow feel of this figure. My wife and I own around a dozen or so POP! figures between us but this one just doesn't have the same feel. It doesn't feel as solid or sturdy as the other figures. I like the look but I don't think I'd pick it up very much. It seems like it might crack like an egg. The look is right but the feel is wrong. I'm giving this on an Eh and a 1/2. Honestly, I'd rather have the basic Captain Phasma.

I've only reviewed a few POP! figures on here, including:

If you're looking for more figures from The Force Awakens, I've reviewed quite a few, including some figures from the 6 inch scale Black Series:
First Order Stormtrooper
Kylo Ren
Posted by Barbecue17 at 12/12/2015