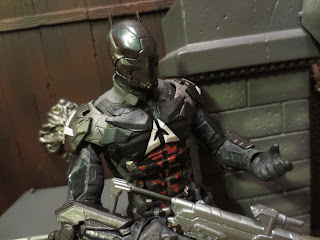 
The Arkham Knight is indeed Jason Todd, the second Robin who has since become Red Hood in the comics. I don't mind this plot twist, but Rocksteady Studios did state that the Arkham Knight was a new character. Whether they were flat out trying to throw off fans or they meant that Arkham Knight was a character new to the Arkham videogame series can be debated, but let's get on to the merits of the figure itself, shall we? 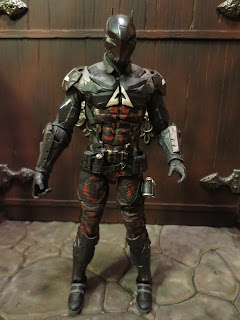 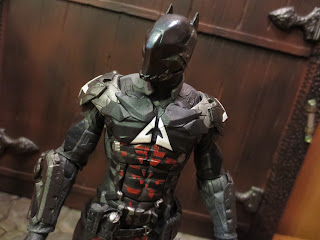 * The sculpt on this figure is incredible! The Arkham Knight's outfit is covered with a variety of textures and details that help to convey that this is an incredibly high tech and well armored battle suit. It definitely conveys the Knight's role as kind of an anti-Batman, something that an angry Jason Todd certainly could get behind. 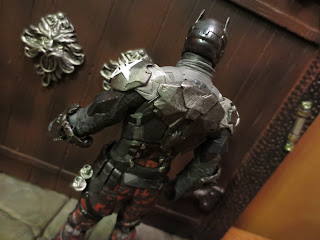 * Here's a look at the figure's back as well as some shots of the various paintwork on the figure. Arkham Knight features some exceptional paintwork such as dry brushing on the armored panels and an excellent red and black digital camouflage pattern. 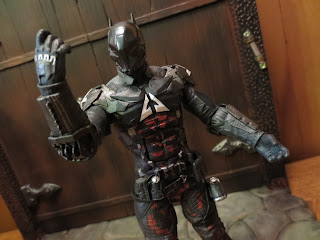 * The Arkham Knight has some wicked gauntlets that look incredible. They're definitely Batman inspired but look less dramatic and more utilitarian and functional. Honestly, Arkham Knight's costume reminds me of a Batman outfit if it were restyled to be grim and gritty. It's kind of extreme, as if a grim and gritty 1990's comic book character had returned and crafted something with modern technology. Huh. Kind of like Jason Todd! 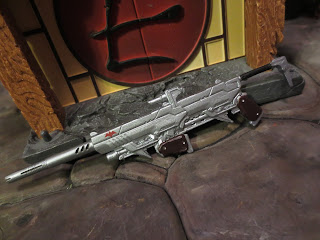 *The Arkham Knight's dual pistols connect together to form a tactical rifle which the Knight uses as somewhat of a sniper rifle. This is an incredibly cool piece of equipment that has a slick paint job and a nicely detailed sculpt. I love it. If you want the single pistols they were available with the Gamestop Exclusive Red Hood figure. Notice you can see the Red Hood bat emblem on the rifle. 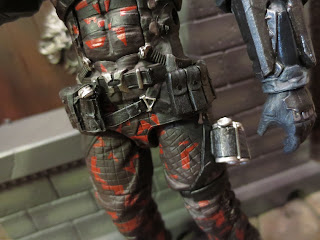 * Here's a closer look at the Arkham Knight's belt: You can see the various ammo pouches, grenades, and explosive devices he's carrying around. It really just looks very cool and the paint work is pretty impressive on it. 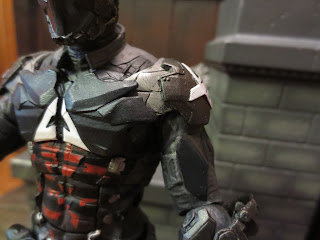 * When I get into the negatives section, I'm about to harp on the articulation of this figure as it's definitely the weak point. That being said, I do like the fact that the Arkham Knight's shoulder armor is made from a soft, pliable rubber. It looks great, adds a more dimensional, layered quality to the appearance of the armor, and hides the shoulder articulation nicely. 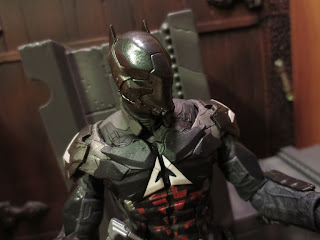 * While the sculpting on the mask is quite well done, I'm disappointed that DC Collectibles didn't try to capture the glowing blue tech readouts on his helmet. Considering that DC Collectibles held this figure back for almost 4 or 5 months in order to prevent spoilers about the character's identity (although some early samples got out) I was also expecting a removable front panel to show off Jason Todd's face. 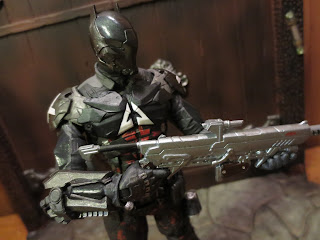 *A big disappointment I have with this figure is that he cannot hold his rifle with both hands effectively. He can hold it but it's a bit strained and he's definitely not holding the front grip. The lack of double hinged elbows (or a wider range of motion on the hinge) prevents this guy from being able to hold really cool poses he should be able to take. 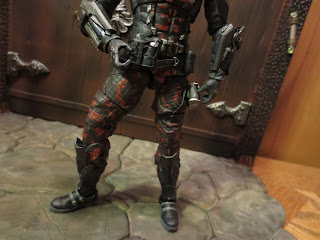 * Another disappointing thing about the articulation is that the hip articulation is really restricted. While the ankles and double-hinged knees are incredible, the fact that hips are so overly tight and limited in motion makes those features almost useless. That's disappointing as the Arkham Knight is definitely a character who needs to be able to move around and show off his skills. 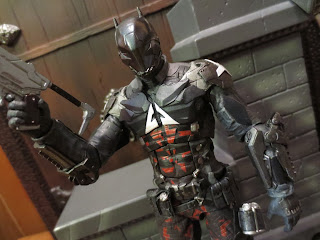 While the articulation is disappointing compared to other figures in the line, it's definitely not what I would call bad. In fact, there's nothing bad about this figure that I can tell. It's still a really good figure. The sculpting and paintwork on this guy is incredible and, even though it's Jason Todd under there, this still feels like a new Batman character. Of course, there aren't that many Jason Todd figures out there, so another one is definitely welcome. This guy gets a Great rating from me and is another strong entry in the so far incredible Arkham Knight line.


I reviewed the Gamestop exclusive Red Hood from this line, so I guess I have reviewed another figure of this character!

I've reviewed a few other figures from the this same line: