Action Figure Review: Dragstor from Masters of the Universe Classics by Mattel 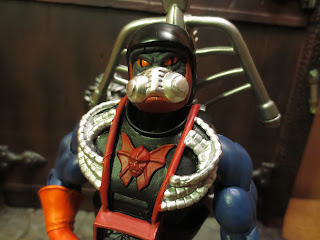 Today I'm looking at Dragstor from Mattel's Masters of the Universe Classics and I have to say that holding this figure in my hand really does feel like kind of a milestone. While Dragstor isn't the last vintage Masters of the Universe figure in the line (as of my writing this the Laser Power He-Man and Skeletor twp-pack hasn't shipped yet), Dragstor here does symbolize that every vintage character from the MOTU and Princess of Power toylines has been recreated in a modern consistent toyline. While Hasbro is still getting there with their G.I. Joe line (and may reach that point), what Mattel has done is an amazing feat. Heck, even Hasbro has yet to release a few of the vintage Star Wars Kenner characters in their modern lines. All things considered, it's been a good journey. Sadly, while the journey has always been a bit rocky, the end of the path has been incredibly unpleasant as over the past few months we have seen some really questionable actions and decisions made by Mattel's MOTU team (I'm referring to Mattel's in-house team, not the Four Horsemen). Besides some noticeably weaker figures in the main subscription (the 200x sub has been amazing) we've experienced a few months of silence and unanswered questions from Mattel, the King Hsss Snake torso dropped from the sub, the Point Dredd Teela fiasco, and a questionably worded letter to the fans that seemed to imply Mattel corporate executives were reading angry forum postings.

Anyways, how does that lead us to Dragstor? He's a real mixed bag. He's got some problems, some oversights, some questionable decisions, and some really cool ideas all mixed together, kind of like the last six months of this line. Ready for a closer look at this motorized maniac? Then join me after the break... 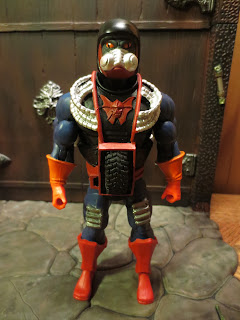 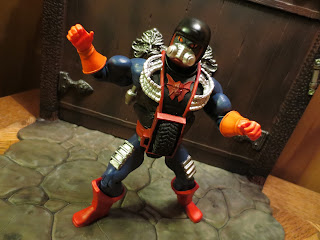 * One thing that has been consistent with MOTUC figures for quite some time now is the quality of the articulation itself. These are some extremely durable and sturdy figures. The joints feel nice and tight and offer up a good range of motion. While Dragstor's mid-torso joint is blocked by his massive armor, that's really a necessity for keeping his design intact. 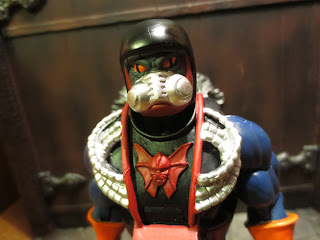 * Overall I'm pretty pleased with Dragstor's look. I like Dragstor's head as it reveals only his strangely reptilian eyes underneath a helmet and a breathing mask. While most of the Horde tends to lean towards the beastly and monstrous, Dragstor eschews an organic appearance in favor of a mechanical visage. His color scheme is pretty sweet and somehow even manages to pull off bright orange driving gloves. 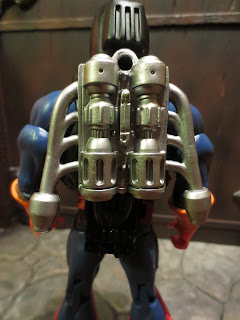 * Here's Dragstor's backpack! It looks like a mac daddy drag racing engine and has a great silver color to it that brings out the detail. It's tough to see in this picture but there's also actually the sculpted hole where the ripcord would have went on the vintage figure. That's a cool detail as it looks like it could conceivably just be part of the engine design or Dragstor's armor. 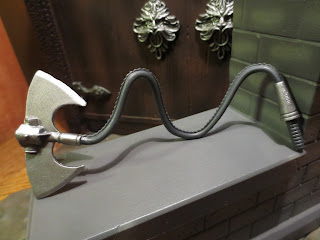 * To make the vintage Dragstor roll forward you pulled a gray ripcord through the hole in his lower back. While a functionless ripcord would be a pretty lame accessory, Dragstor's ripcord has been reimagined as a whip-like weapon with a swinging blade on the end. I love it! It looks menacing, particularly due to the teeth of the ripcord running down the middle. I actually don't mind at all that the whip is made from solid plastic as it looks cool and dynamic when Dragstor is swinging it. 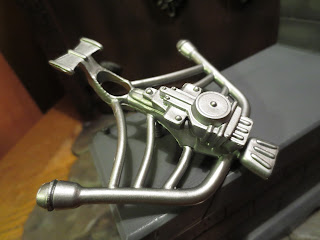 * One of my favorite updates to the Horde figures in this line has been how most Horde members have received unique crossbows that relate to their unique talents and personalities. Dragstor's is really cool as it absolutely looks like engine parts from a dragster. I wonder what this crossbow fires? Exhaust fumes maybe? Or flames. Flames would be very, very cool. 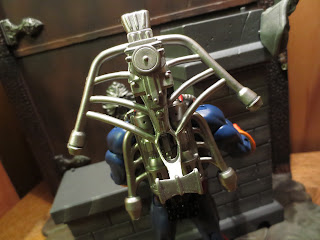 * The crossbow can actually fit onto Dragstor's engine pack to make his engine look even more souped up. This doesn't look functional at all but it does look kind of cool. Concept images of the 200x Dragstor redesign featured more pipes similar to this so it's probable that this is paying homage to one of the characters we never saw updated in that line, even in Staction form. 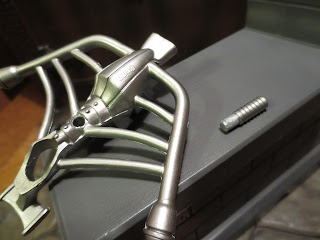 
*That cool crossbow I mentioned? The handle falls out of the socket very easily. Not sure why that is, but it happened. I've not had that problem with any of the other Horde crossbows before. 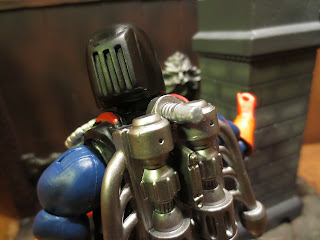 * So the handle for the crossbow I mentioned earlier? Here it is stuck in the top of the engine backpack. It's a real pain to get out of there and really requires either pliers or teeth; whatever is closest. 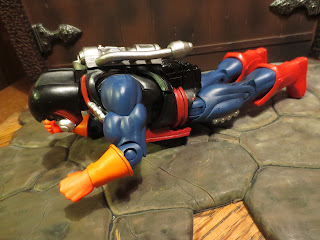 * So, how does Dragstor roll? Well, he doesn't I mean, you can lay him flat on the ground like this and he'll kind of look like he's rolling like the vintage figure but, without a functional wheel or the ability to look forward, he's really just going to be...spinning his wheels. Considering that so many figures replicated their action feature in some way and we've received a number of "deluxe figures, there really was no excuse to not make Dragstor actually roll. 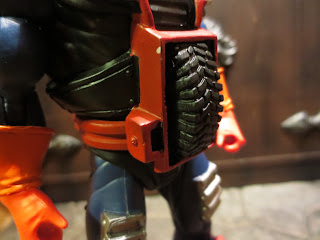 * The wheel itself looks good from the front and it surprisingly is actually made from a rubbery material, similar to a tire. That's a cool detail. Unfortunately, when you look at the wheel and how low on the body it is positioned, it becomes painfully obvious that there's no way this wheel could actually be housed in Dragstor's body. It's too large! It kind of kills the illusion that there's a wheel inside when you try to visualize where the wheel would be. It needed to be raised up more on his torso. 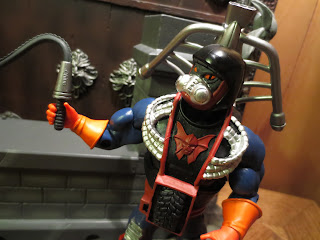 *Personally I'm not too bothered by this but I do feel the need to mention a mistake on this figure: While the vintage Dragstor has a blue torso underneath his pipes and stuff, this figure's torso is black. I don't think it looks bad and it's not a distinguishing mark left off of the figure, but some folks hate it. I doubt this was a design decision on Mattel's part rather than just simple negligence, but it doesn't look bad. Your mileage may vary, however. 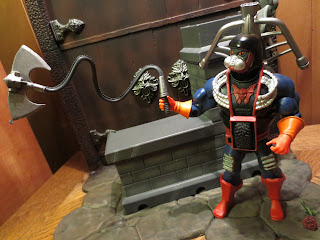 Over the course of this line Mattel has released some figures that just went above and beyond in order to capture the spirit and function of the vintage toys. I'm thinking of figures like Ram-Man, Mantenna, Modulok, Gwildor, Rattlor, and Fisto, all figures that had a little extra magic. Dragstor should have been one of those figures but, sadly, he's not. Mattel did an admirable job on him if they were truly confined to using only the basic torso, but Dragstor deserved better. He's still a Good and a 1/2 figure, but he deserved to taste Greatness, don't you think?

I've been a Masters of the Universe Classics reviewing machine! Check out all of these MOTUC reviews I've written: