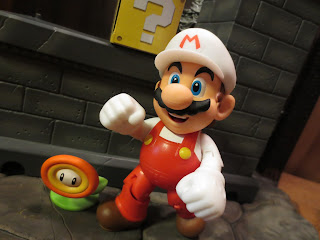 As we're getting close to Christmas and the end of the year, it's time to start thinking about what toy lines made a huge impact on us this past year. One line that I imagine I'll have to consider in my Top 10 Favorite Toy Lines of the Year list is Jakks Pacific's World of Nintendo. Even though it's kind of been a sleeper hit, there have been plenty of collectors (myself included) who now have a shelf filled with Nintendo characters that we never imagined we'd see in a consistent action figure form. Today I'm looking at another figure from the third series of figures in the basic line: Fire Mario. A variant of the standard Mario figure from series one, Fire Mario represents everyone's favorite plumber/ adventurer when he picks up a Fire Flower and gains the ability to hurl fire balls at his enemies. Wicked! Ready for a closer look at Fire Mario? Then join me after the break... 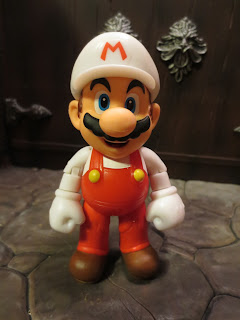 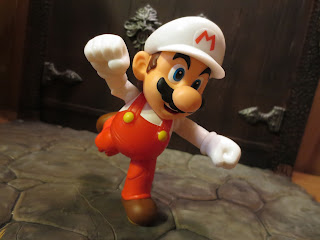 * Mario is definitely not as well articulated as the S.H. Figuarts Mario, but he's also about 1/4 of the price. He's still pretty fun to play with, though. There's a nice mixture of joints in the figure to allow for some fun movement. He also has tremendous balance. I really hope we get a standard Koopa at some point so we can get a turtle shell for Mario to kick. Imagine how cool that would look? 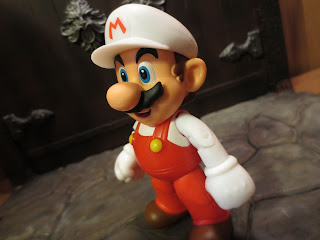 *This is the same Mario sculpt as the first series figure and I still like it quite a bit. The exaggerated nose and mustache really make this guy look like he just popped out of a video game. There's even some finer details such as the stitching on his overalls  and some padding on his gloves. The paint work is bold and colorful, representing Mario in his Fire form as he's been depicted in all games since Super Mario Bros. 3 (in the original Super Mario Bros., Mario's fire form has white overalls with a red shirt). 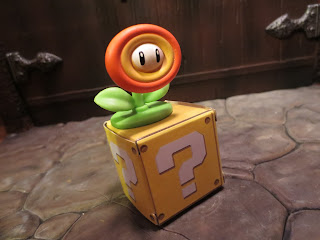 * Fire Mario appropriately comes with a Fire Flower accessory stores inside the cardboard "?" block as the figure's mystery accessory. This is a really cool looking accessory as it features the more modern look for the Fire Flower as seen in games like Mario Galaxy, New Super Mario Bros., and Super Mario Maker. The Fie Flower is permanently attached to a base which allows it to stand rather nicely alongside your collection of other Nintendo accessories. 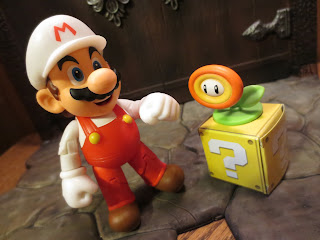 * The only thing I don't like about the Fire Flower accessory is that there is no way for Mario to hold it. Since this guy is a straight repaint of the basic Mario figure from series 1, he has the same closed fists as that figure. I would have loved a new hand with an open grip allowing Mario to hold the Fire Flower out ala the Smash Brothers games. 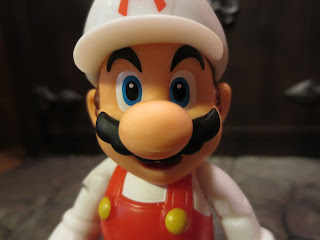 * Do Mario's eyes look just a bit uneven to you? This isn't terribly noticeable in person but, when I looked at the picture, I had to laugh. You could honestly overlook this as being a bit of an expression rather than a paint glitch, but it's a bit odd just the same. Also, the paint coverage isn't perfect on Mario's sideburns and there's some of his flesh-colored plastic showing on them. 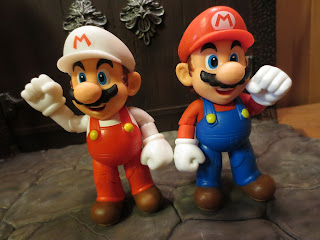 Back when I got my original Nintendo as a Christmas gift back in 1987, Mario in his Fire form was probably the coolest thing in a video game ever. The look and the ability to satisfyingly launch fireballs and eliminate enemies from a distance just seemed so amazing! This figure just has a cool sense of nostalgia about it and I'm really liking it. It's a Great addition to the World of Nintendo line and a solid Mario variant. Fire Luigi is appearing in series 4, so soon we'll have another cool pairing of the brothers for our shelves!

If you're looking for the basic Mario, I reviewed him earlier this year on Action Figure Barbecue.

I've reviewed most of the other World of Nintendo figures from this year also, including: