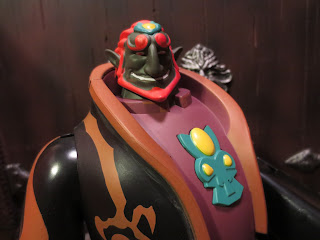 A few years ago I wrote a review of some older Legend of Zelda action figures from 1998 where I kind of lamented the fact that there were so few Nintendo based toys on shelves for kids and collectors. Maybe someone from Jakks Pacific read that article because over the last year or so Jakks has been doing a pretty awesome job of delivering us some incredibly cool Nintendo based toys. So far we've received figures from Nintendo properties such as Super Mario Brothers, Donkey Kong, Metroid, Star Fox, and The Legend of Zelda, and it's a figure from that last property which I'm looking at today. One of the series 2 deluxe figures, released earlier this year, is Ganondorf from The Legend of Zelda: The Wind Waker. Let me tell you that this guy has been tough to find. I finally ordered mine when Big Bad Toy Store got their orders in. They still have them in stock, but they've raised the price a bit. Jakks needs to really work on improving their distribution as some of the figures in this line have been a beast to find! Now that I have the evil Ganondorf, let's jump in and take a closer look at him, shall we? Join me after the break... 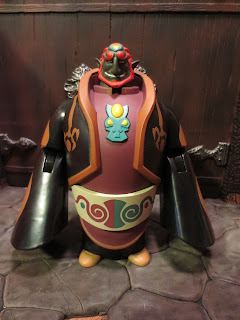 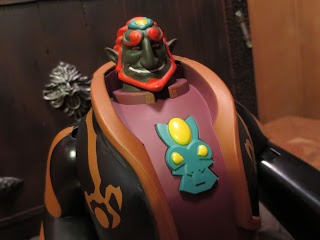 *One of the challenging things about turning Nintendo characters into action figures has to be figuring out what to do with characters that have such odd proportions. Fortunately, Jakks has done a great job with this and Ganondorf  looks like his big, bad, cell-shaded self. It's a great sculpt that appears simple, smooth, and polygonal. It's a great rendition of a Gamecube era cartoonish videogame character. 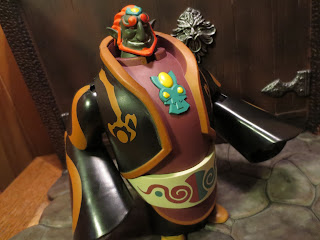 * The paintwork really makes this figure, though, as even though Ganondorf's an evil guy in a black robe, he also has plenty of colorful details to make him standout. I love the bird claw inspired patterns on the front of his robe, the amulet on his chest, and the colorful ed and blue pattern on his belt. 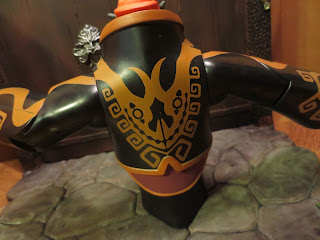 * Ganondorf also has a beautiful emblem painted on the back of his robes. It's very nicely rendered here and looks incredible. The line work on this is incredibly neat and clean.  You can clearly see the bird inspired motif on this! 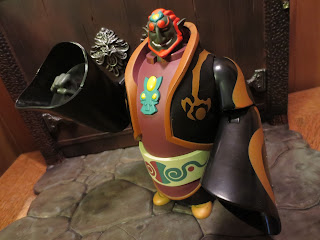 * While it's not anything new for the deluxe figures in this line, I still wish they would come with an accessory or two. Ganondorf is known for swinging these two deadly swords in The Wind Waker. Not only does he not get swords but his hands are sculpted into fists, so you can't even add your own without using duct tape or welding. 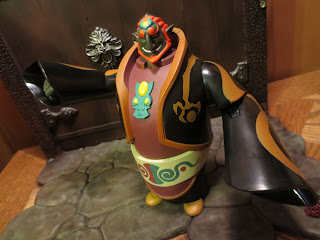 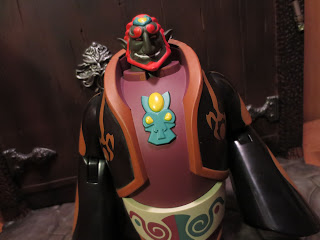 Sometimes you just look at an action figure and say to yourself, "I never thought I'd see this on store shelves." Well, thanks to Jakks' distribution, you probably won't. Still, who thought we'd see a Ganondorf figure from The Wind Waker coming from a mass market toy company in 2015? While he's not the best action figure, he's still a fun toy and, if you manage to get him at a non-scalperish price, he's a Good and a 1/2 figure to own. Zelda collectors should be happy with this release as it's not everyday this guy hits toy shelves!


I've actually reviewed one other Ganondorf figure: It is the Ganondorf from the Legend Of Zelda: Ocarina of Time pre-order action figure bonus set from 1998.

I've reviewed plenty of other figures from Jakks Pacific's World of Nintendo line, too, including: