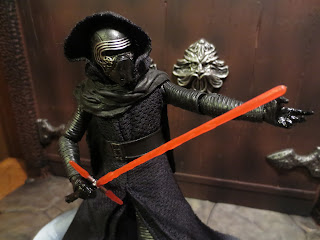 As we get closer and closer to the release of Star Wars: The Force Awakens, the character of Kylo Ren grows more and more intriguing. Who exactly will this new villain be? The son of Han and Leia? A new dark Jedi obsessed with Darth Vader? Someone completely new and completely evil? There's not much time left to wait to uncover Kylo Ren's true identity, is there (assuming we learn it in this film)? While I reviewed the Black Series Kylo Ren figure that I picked up on Force Friday a couple of months ago, today I'm looking at a newer Kylo Ren figure: The K-Mart exclusive Kylo Ren from Starkiller Base. What exactly is Starkiller Base? While it's a clever nod to the early name for the main hero in George Lucas' early conceptualizations of Star Wars, it also seems to be the First Order's new super weapon that may be located on some snowy planet. Regardless of the specifics of what Starkiller Base is, this version of Kylo Ren is easily recognizable as being based on that first shot of the villain igniting his hilted lightsaber in the original teaser trailer from last year. Since I've so  reviewed the basic Kylo Ren Black Series figure so recently, today I'm just going to point out the differences between that figure and this exclusive figure. Ready for a closer look at this new dark warrior who is strong with the Force? Then join me after the break... 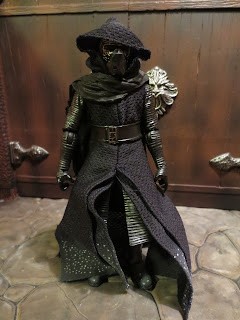 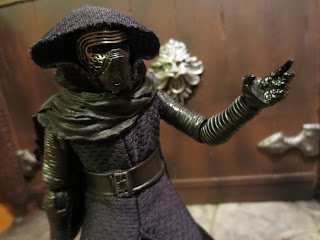 *The only sculpted difference on this figure from the first Kylo Ren is the presence of a newly sculpted gesturing left hand. Whether you pose it so that Kylo Ren is delivering a Force push or grasping his enemy's throat with a Force choke, it's a nice feature that is definitely more exciting than the standard C-grip on the last figure. I love gesturing hands on action figures! 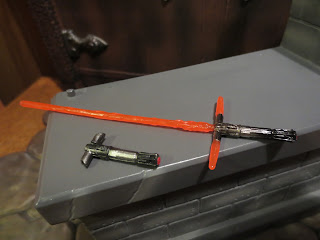 * While the gesturing left hand is the biggest difference on the figure itself, the reason most fans are probably buying this figure is that Kylo Ren comes with a corrected Lightsaber. The first version's saber featured a removable blade but it also had a weird energy arc effect to it. Here, Hasbro does what they probably should have done originally and gives us the standard Kylo Ren Lightsaber and a separate hilt piece. These both look great and definitely come off as being more film accurate, at least compared to all of the images we've seen and the prop replicas available. 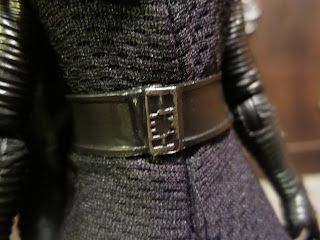 *Here's a minor paint difference that I didn't notice until I was taking pictures: The belt buckle is different on this figure. The first Kylo Ren has a black buckle with silver interior highlights while this one has a silver buckle with black interior highlights. From looking at film stills and images, I think this one is a bit more accurate than the first version. 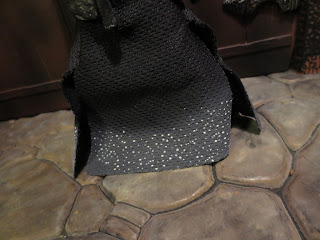 * Since Kylo Ren is represented here as being on some sort of a snow world, the bottoms of his robes are covered in a fine layer of powdery snow. It's a decent effect for a figure in this scale and it makes for a fun variant. I assume that Kylo Ren is going to be one of those characters like Darth Vader who doesn't change outfits often, so environmental differences will have to be utilized to craft new and unique variants. 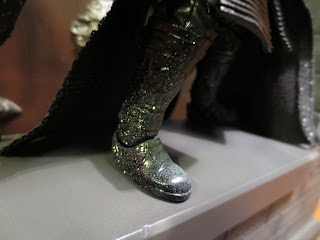 * Kylo Ren's boots also have a nice snowy paint job. This fits in perfectly with the theme of the set adds another layer of realism to the snowy battle scene being depicted here. I wonder if he has extra socks on under there too? 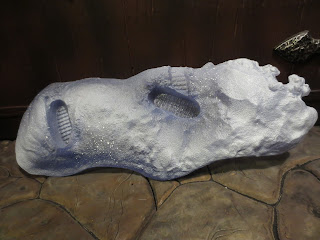 * The largest new piece included with this figure is a snowy base which the figure's feet can rest in to reenact his appearance in the original teaser trailer. This is a really cool piece as it looks icy and uneven. The plastic is opaque with a number of white dustings of paint on it to give it a more realistic appearance. The right edge also looks like it will attach to another base, possibly the base of the rumored Starkiller Base version of Finn that will come with a lightsaber (as seen in some of the newer trailers and TV spots). 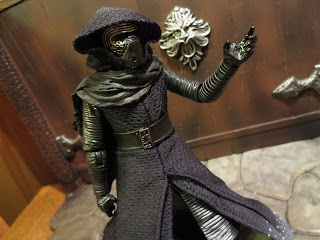 
*The only negative difference I see on this figure from the original figure is that the cloth robes have a few more loose strands. They're tough to see in a picture but in person you'll notice a few loose strings running off the edges of Kylo Ren's robes. 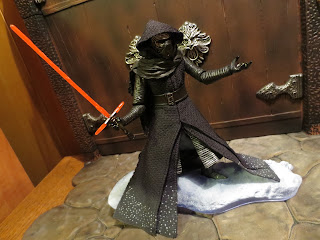 While Hasbro absolutely should have included this Lightsaber with the standard Kylo Ren figure rather than with a store exclusive variant, I still think that this is a pretty nice variant. It's a bit more pricey than a standard figure but it could be because of the larger base or, being that this is exclusive to K-Mart, it could be due to this being a lower run than the Target and Toys 'R Us exclusive figures. This Kylo Ren is probably not a necessity but he's a fun extra. Knowing that he'll most likely connect to a future figure is a pretty big incentive as well. I gave the basic figure a Good and a 1/2 but, since this one has a better Lightsaber and the new base, I'll upgrade this one to a Great rating. There's still some things about the standard figure I'm not wild about (you can read those in the other review), but this is still a neat exclusive. Personally, I'm really pleased to see almost every retailer I can think of getting some sort of Star Wars exclusive right now. Hopefully it's a sign of good things to come and renewed retailer support for Star Wars as a toyline.

I've referenced the first series Kylo Ren figure from the Black Series Phase III which I picked up on Force Friday, so here's the link to that review again.

I've reviewed plenty of other Black Series figures, including: