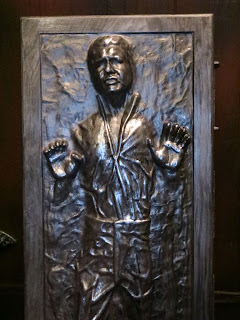 Back in the summer of 2013 Hasbro released their first Star Wars: The Black Series release: The SDCC exclusive Boba Fett with Han Solo in Carbonite. While Boba Fett was released in Phase I as a standard release, Han Solo in Carbonite was always held back to keep him exclusive. While this isn't truly an action figure, Han Solo frozen in carbonite is one of the most iconic elements of the Original Trilogy and the character/ prop has a long history in toy form dating back to his inclusion with the vintage Kenner Slave 1. It always seemed like Hasbro would find some way to release this piece again to a wider body of collectors and finally they have! Han Solon (Carbonite) is an Amazon exclusive figure in the Star Wars: The Empire Strikes Back 40th Anniversary Collection and I couldn't be happier. Some folks seem salty as a pretzel about this release but I'm loving it. Let's check out Han Solo (Carbonite) after the break... 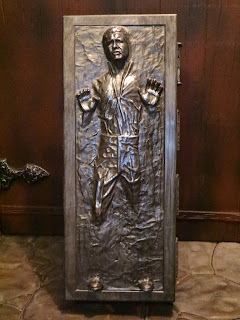 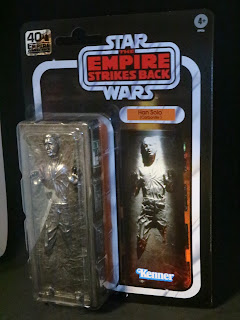 * Han Solo (Carbonite) comes packaged in an oversized vintage Kenner styled card. It looks great, even though the image of Han in carbonite is taken from Return of the Jedi. Yeah, it looks like Hasbro photoshopped an orange glow in the back to make it seem more like the Bespin freezing chamber, but it looks OK for packaging. 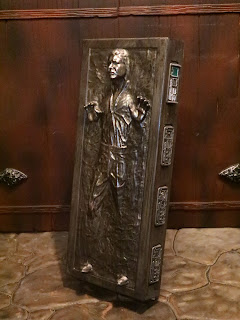 * Yeah, this is a solid plastic block with no articulation but, dang, doesn't it look amazing? This thing is perfect and looks like a miniature prop replica rather than a toy. The paintwork is excellent, giving the carbonite block an amazing appearance. Looking at it, you feel like this would be cold to the touch and heavy. It's an amazing piece for sure! 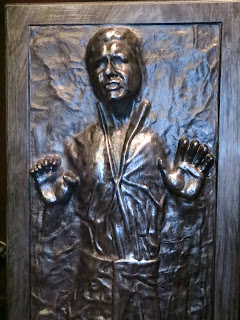 * When you get up close to the carbonite slab you can really see how fine of a job Hasbro did of capturing the likeness of the character/ prop. The pained expression, raised hands, and the unusual texture of the carbonite is excellent. 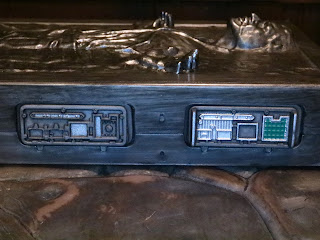 * The carbonite has 8 panels on the sides (4 on each side) and they're all present, accounted for, and highly detailed. This is definitely a step above the previous Han Solo in carbonite figures I've owned. 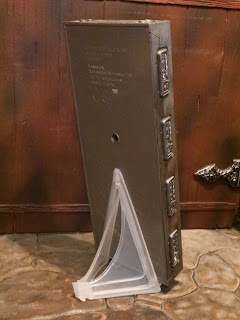 * Yeah, this is just a block of plastic. An iconic block of plastic, sure, but a block of plastic nonetheless. Fortunately, Hasbro actually gave Han a really nice translucent stand that plugs into the back and bottom of the stand, allowing you to keep him standing upright on your shelf. It works very well and definitely makes this feel like you're getting more for your money. 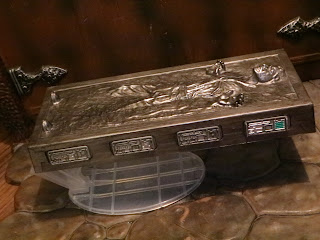 * There is a third piece of the stand that can attach to the bottom, allowing you to pose the carbonite block as if it is hovering like when Boba Fett had it delivered to his ship on Cloud City. You can place the stand on either side of the figure, giving you an option if you're making a diorama. 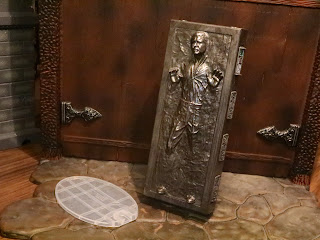 I've wanted Han Solo in Carbonite to be re-released in The Black Series for years now and I'm thrilled it's finally here. While he's not technically an action figure, Hasbro did offer up some cool display options for the piece. He's also $5 bucks cheaper than an average figure which is appreciated. While I expected we'd see this figure in a deluxe set with a freezing chamber Han Solo, I'm definitely OK with this release, too. He's a Great item and an essential piece for your Black Series collection.


I've reviewed so many Han Solo action figures that he gets his own review archive! Check out The Kessel Run for all of the Han Solo reviews you could ever want!