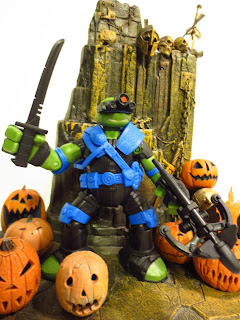 As in my reviews for Stealth Tech Donatello and Stealth Tech Raphael, I've admitted that I'm a sucker for any character wearing stealth suits of any kind. Whether it's Raiden or Solid Snake from Metal Gear Solid, Sam Fisher from Splinter Cell, or Snake Eyes from G.I. Joe, I love the designs and desperately want toys based on those outfits. When I saw the Stealth Tech Turtles, I knew I'd end up buying them. Leo here just looks so awesome in his stealth gear and is both a fantastic toy and an excellent, worthwhile variant. From what I've seen the Stealth Tech Turtles are all packed one per case but it seems that many fans seem to be noticing Leonardo disappearing from store shelves more quickly than his brothers. Whether it's due to the fact that Leonardo is just a super popular character (a friend of mine named his car Leonardo) or that this action figure really appeals to kids and collectors is up for debate. Let's take a look at the figure and see if we can come up with any answers... 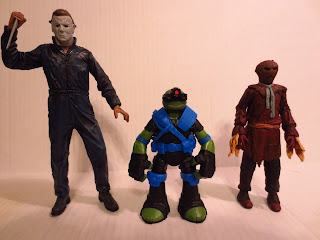 Stealth Tech Leonardo is right around 4 1/2 inches tall. While the toys don't look exactly like character models from the CG animated TV series, they still match up pretty well to what you see on the screen (although most of the toys don't have pupils).  Leo will fit in easily with the rest of the line and looks great standing alongside his Stealth Tech brothers. 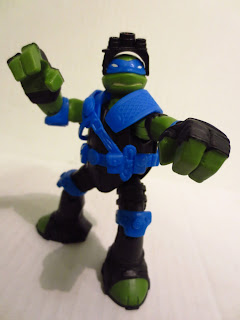 The only point of articulation that the original Leonardo had that this Leonardo is missing is swivel wrists. Otherwise, he's a fairly articulated mutant: ball jointed knees, ball jointed hips, ball jointed shoulders, ball jointed elbows, and a true ball jointed neck. These guys are sturdy and meant to be played with by kids, so no worries about breakage. I didn't have any QC issues, either. These turtles would make excellent toys for younger kids who are rough with their action figures, something that can't be said of many toys these days. 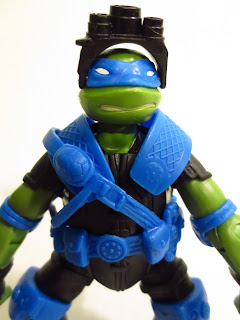 As you can tell from the name, the pictures, and my blurb at the beginning, Leonardo has really got a spy thing going on. Clad in a black stealth suit with fingerless gloves, a crossbow, and tri-lens night vision goggle, you might mistake Leo for Sam Fisher.  Leo's got a determined look on his face and his night vision goggles can swivel up and down to either be used or to rest on top of his brow. His traditional bandanna looks great as it's actually a separately sculpted piece which really adds some depth to the sculpt. The same is true of his knee pads and elbow pads, all of which have some cool textures on them. Leo's clad in a lightly armored sleeveless bodysuit and pants with boots. His toes are exposed on the boots, so let's hope he doesn't stub them! His web-gear is covered with goodies such as the T-phone, pouches, a length of rappelling cord, and a carabiner to aid him in his undercover hijinks. 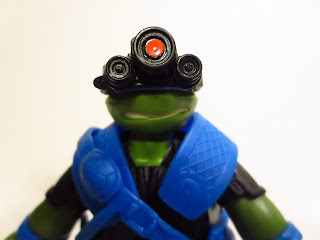 As with most TMNT figures, the paint is quite simple. It works fine here, however, as all of the necessary colors seem to be in place. The web-gear and all of Leo's pads are molded in blue plastic. The rest of the parts of the figure are either molded in green or black and then painted. Other than a little slop on the fingerless gloves, the paint job is pretty neat and clean. While I'd love to see little elements like the T-phone painted, that just seems unlikely to happen in this line. 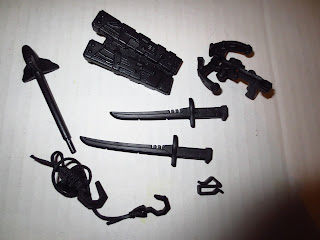 The sculpt is great, the concept is cool, and the articulation is solid, but it's definitely the accessories on these guys that really cause them to excel. Leo is loaded with good stuff to both help him fight the Foot Clan and do sneaky spy stuff. First, he comes with a rappelling cord and clasp, just like the rest of the Stealth Tech Turtles. When I get to reviewing Michelangelo I'll work on a shot of all four of these guys rappelling down from something in unison. Secondly, Leo comes with a really cool crossbow that definitely reminds me of he little crossbow Sam Fisher uses in Splinter Cell: Blacklist. It's a small handheld crossbow that has a removable arrow you can "flick fire". I love this thing! Last, Leo comes with a very cool double sheathe for his katanas. The sheathe plugs into his back (it's a little loose though) and is covered with wires and circuitry. Why? Who cares? It's cool! The two katanas are very cool (one is longer than the other) and look like something that Snake Eyes might use. They're definitely very cutting edge (no pun intended) and feature a cool serrated edge on the bottom of the blade. It's a great accessory kit, possibly the best for any of the Stealth Tech Turtles. 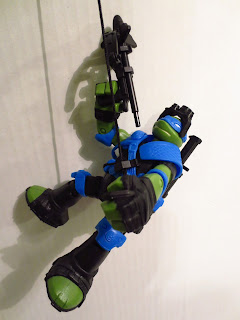 While the Ooze Tossin' Turtles were pretty average variants at best, the Stealth Tech Turtles have been incredible fun and inventive. They're all good although Leo's accessory complement really elevates him to the top. I'm giving Stealth Tech Leo a Great and a 1/2. Keep in mind that these are moderately priced, available on retail shelves nearly everywhere, and marketed towards kids, which makes them all the more impressive. These guys also seem to be insanely popular as well. On Friday evening I had to run to my nearest Wal-Mart and found a few cases of figures had just been put out. When I went back today to print off some pictures, I noticed all but four figures were gone. I can't remember the last time an action figure line seemed to sell so well, so let's hope for a good long life for this incarnation of the TMNT.
Posted by Barbecue17 at 11/25/2014