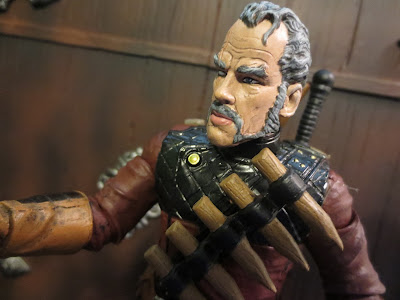 Van Helsing is one of those figures that I really should have bought last year, but I had to wait until I saw him in person for some reason. He's the second of my three Heroes Con 2015 acquisitions and probably my favorite item that I picked up at the show. This is such a cool reinterpretation of the character of Abraham Van Helsing! The character of Van Helsing has been portrayed many different ways since his first appearance in Bram Stoker's 1897 novel Dracula, but Diamond Select went and did something cool by creating a representation of the character that takes his fame as a vampire hunter more literally. Sculpted by Jean St. John, Van Helsing is ready to slay the legions of the undead that line your toy shelves. Considering how many horror toys I own, the good professor is going to have a hell of a time. Darn, today I saw some candy apple M&Ms and now this figure? I'm ready for Halloween (which starts for me on August 1st by the way). Ready for a closer look at this figure? Then join me after the break... 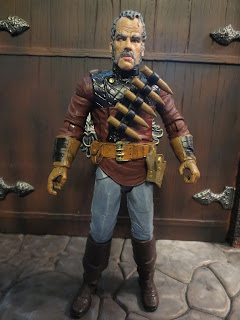 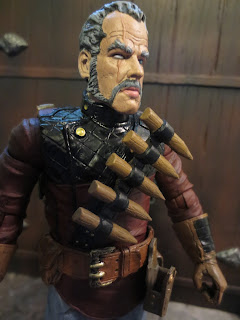 * While the other Universal Monsters Select figures are based off of their film counterparts, Van Helsing is not. That mans that Diamond created a new likeness here and I'm pleased to report that it looks great. This is a very cool representation of Van Helsing. He's still an older gentlemen with some wicked period appropriate facial hair, but he's also been run through the ringer a time or two. The scar on the right side of his face and the blind right eye definitely tell a story about the kind of down and dirty fighter Van Helsing is. His outfit is awesome and features plenty of cool details such as the bandolier of stakes across his chest. And look at the quilted padding on his shirt. Amazing! 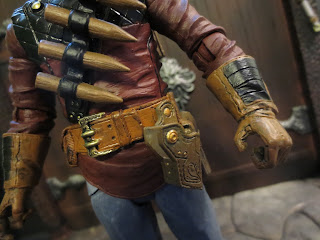 *The paintwork is quite lovely! Diamond usually does a fine job in this category and Van Helsing is not an exception. There are a number of washes and drybrushing techniques used to give the figure appropriately worn appearances. This looks amazing on his leather belts and gloves. 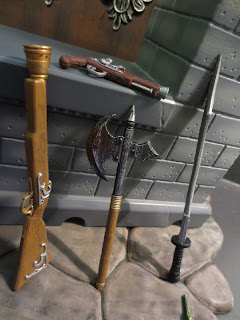 * Van Helsing doesn't just use his wits and holy water to fight the undead (although those are good things to have): He uses a nice sized complement of weapons to remove the "un" from the undead. He's armed with a blunderbuss rifle, a nicely worn (and bloodies) ax, an elaborate scimitar-like sword, and a flintlock pistol.  The sculpt and paintwork on these look incredible. 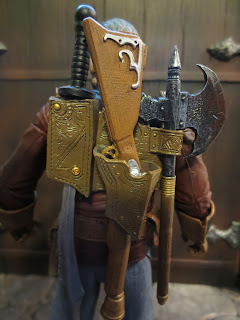 * Better than just having a ton of weapons is the ability to stow what you've got! Van Helsing is wearing a nicely crafted custom harness that allows him to keep his weapons readily available. The scimitar, axe, and blunderbuss fit in the slots on his back while the flintlock pistol stows in the holster on his left hip. The harness is gorgeous, intricate, and perfectly functional. 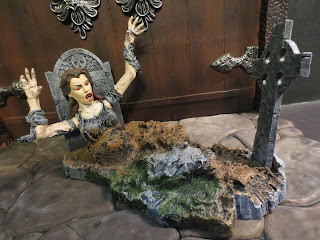 * I love any figure that comes with a diorama like base and Van Helsing has one of the best I've seen! It's a cemetery scene with two headstones and a vampire popping up out of the ground! The paint work and sculpting is incredible and there are two foot pegs provided. The pieces are easily removable, as well, just in case you need to move this or something. 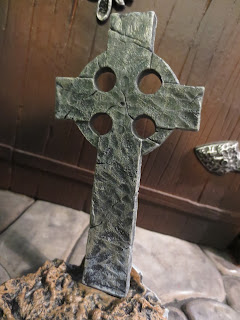 * I love these gravestones! The sculpting is intricate and really captures the look of weathered stone! 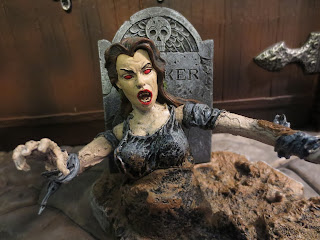 Vampire! One of the coolest elements of this toy is the female vampire popping out of the ground near her grave. She's really creepy and features some excellent design. Heck, she's almost  second figure. What's even cooler, though, is that she's coming out of a grave labeled as Harker. Yes, this seems to be Mina Harker who has become a vampire! She has swivel shoulders and a ball jointed head, allowing you to add some flavor to her pose. 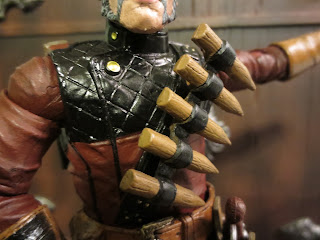 *I love the bandolier of stakes across his chest. It's an awesome detail. What I dislike, though, is that they set rather awkwardly. I wish the strap laid flatter and was molded to fit the contours of Van Helsing's chest. Also, the fifth stake is pretty high up. Seems like it'd be smacking Van Helsing in the face from time to time. 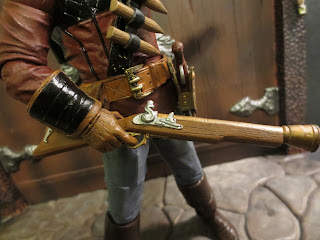 *All of his weapons fit in his hands but the articulation is a bit stiff and there really isn't a great way to hold some of them naturally. I love the blunderbuss but you're not going to get a natural firing position. 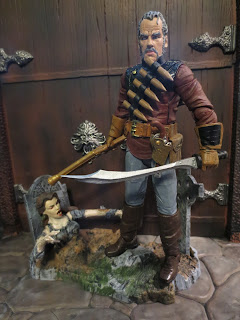 I wish I'd bought this figure last year as he would have easily made one of my top 10 lists. This is one of those figures that just checks off all the boxes on the "Things I Like" list: Victorian era monster fighters, diorama like bases,  weapons that can be stored on a figure, and horror. There are some minor problems that probably could have been easily solved such as the odd placement of the fifth stake and the stiff articulation but even those don't take away from this being a quality action figure. For the going rate of $22-$25 dollars, this thing is a steal! There's apparently a Toys 'r Us exclusive version that doesn't come with the grave display base, but why the heck would you want that? It's just too cool! This guy is going to chill on my shelf next to Hellboy, Ash, and other brave and dedicated monster fighters who vow to hold back the forces of darkness!

Funko released some Universal Monsters ReAction figures last fall:
The Invisible Man
The Mummy
The Phantom of the Opera

McFarlane's Monsters, one of my favorite toylines of all time, was clearly inspired by the Universal Monsters:
The Mummy Playset
Werewolf Playset