Something Has Survived!: Carnotarus (Action Attack) from Jurassic World by Mattel 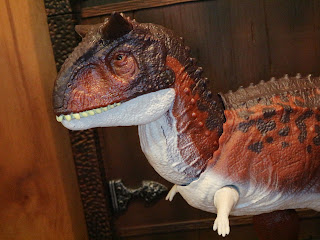 I'm checking out another Jurassic World toy today and this time it's the Carnotaurus! While Carnotaurus didn't appear in any of the Jurassic Park films directly, Carnotaurus DNA is a part of the genetic makeup for the Indominus Rex from Jurassic World. The Carnotaurus has shown up in the trailers for Jurassic World: Fallen Kingdom, however, so the "meat-eating bull" is finally getting a chance to appear on the silver screen. Well, in a Jurassic Park film, anyways. The Carnotaurus appeared in the 2000 film Dinosaur which means lots of folks are pretty familiar with this species. I gotta admit, I'm pretty excited to see this one in the film. This version is the Action Attack Carnotaurus, which is Mattel's name for larger dinosaurs that feature traditional action features. Ready for a closer look at the Carnotaurus? Then let's check it out after the break... 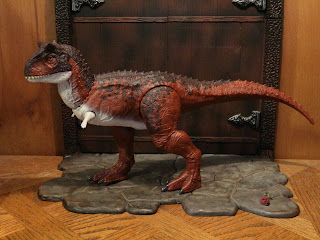 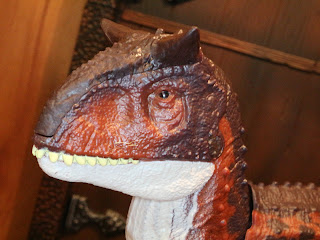 * I love the look of the Carnotaurus. The animal has most of the charm of the Tyrannosaurus Rex but also adds in the extra cool factor of having horns on the head. The sculpting and paintwork on the dinosaur portraits have been great in this line and the Carnotaurus is no exception! 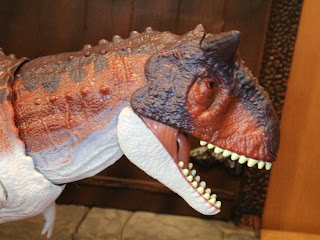 * The Carnotaurus has a really fun play feature: Press down on a specific spot on the animals's back and the neck and head lunge forward while the jaws snap shut. It works great and is just quite a bit of fun to play with. 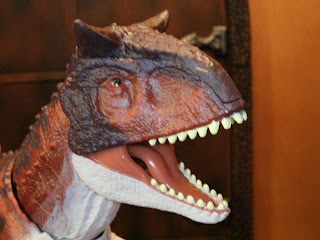 * This is going to sound like a bit of a stupid positive but if you time the pressing of the button just right you can either make the jaws open and close as if the Carnotaurus is talking ("Carnotaurus Coast to Coast, anyone?) or you can cause the jaw to shut and just have it bounce its head up and down as if it is listening to some grooving tunes. I dig. 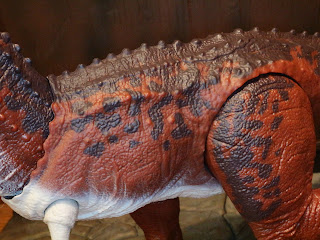 * The Carnotaurus has one of the best paintjobs I've see on a dinosaur in this line. I love the red and black coloring and the detailed sculpt on the skin and ridges all down the dinosaur's back. 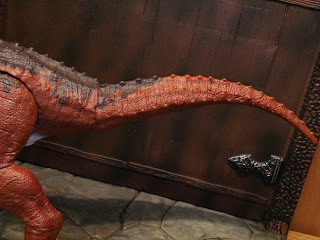 * The Carnotaurus' tail features a balljoint and can swing around quite well. It can help the figure stay balanced or simply just give you more options when posing. 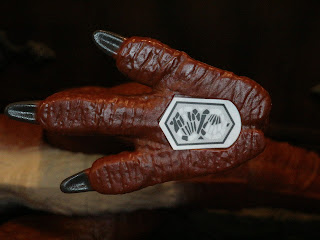 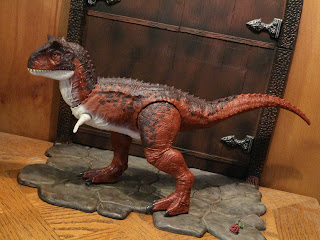 * My only complaint with this toy is that the articulation could probably be a little bit better. I do wish the legs had a bit more articulation, and possibly some type of balljoint on the head as well. I know not every dinosaur in the line can be as well articulated as the Indoraptor but a bit more movement would have been welcome. 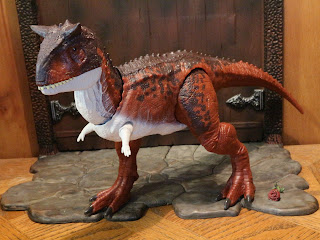 The Carnotaurus is probably one of my favorite dinosaurs I've picked up so far from this line. It is just a great looking figure that is incredibly fun to play with. There is just something special about dinosaur toys and Mattel is releasing some of the best we've ever seen. This is a Great addition to your own Jurassic Park and adds another terrifying thunder lizard to your shelf. Whether or not you want to pretend that the Carnotaurus hosts its own talk show is up to you!