Something Has Survived!: Allosaurus (Roarivores) from Jurassic World by Mattel 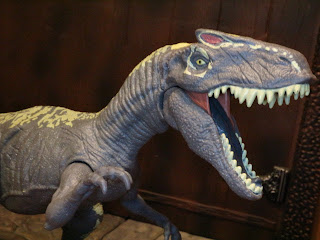 Today is the official release date for Jurassic World: Fallen Kingdom in the USA and I am excited for this movie! My "Something Has Survived!" series of reviews has been a fun way to help express my own hype for the film, especially considering I wasn't really looking forward to this toyline. The last time I even cared about toys from a Jurassic Park film release was Kenner's toyline for the Lost World but Mattel has really worked some magic. Today I'm checking out one of the battery operated "Roarivores" that I found at Wal-Mart earlier this week: The Allosaurus. These typically retail for around $15 or $16 bucks but Wal-Mart has put these on rollback and they are flying off shelves for around $11 or $12 bucks. This is going to be the first appearance of an Allosaurus in a Jurassic Park film, so let's celebrate by checking out this very cool toy... 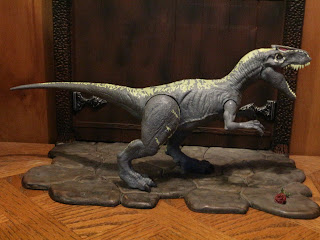 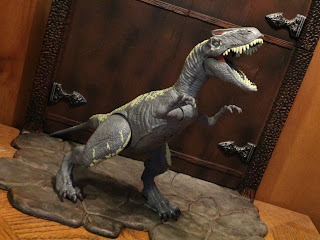 * While the Allosaurus doesn't have many joints, the ball jointed hips and swivel/ hinge shoulders do allow for plenty of posing. The carnivores that are shaped like this are always just so much fun to play with and being able to pose her arms and give her some great stances makes this a fun toy. 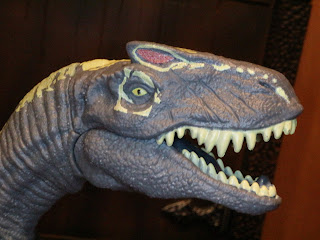 * That's a slick headsculpt. The sculpt, the paintwork, and the giant teeth all go together well to depict a scary dinosaur with that signature Jurassic Park look that separates the franchise's dinosaurs from the rest. 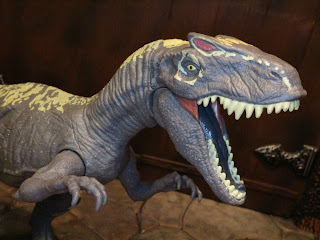 * The Allosaurus has an action feature! Press down on a button on her back and her mouth snaps shut. Perfect for devouring other dinosaurs or other human figures you have lying around! 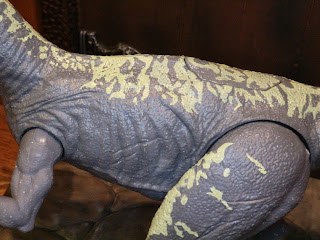 * The sculpt and texture on the Allosaurus' body is incredible and the paintwork adds some real vibrancy to the overall look of the figure. I love the yellow details mixed with the bluish-gray skin. 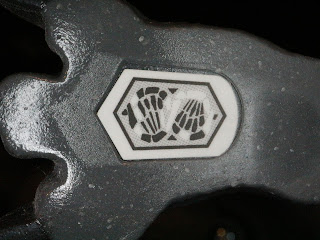 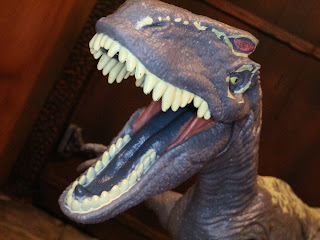 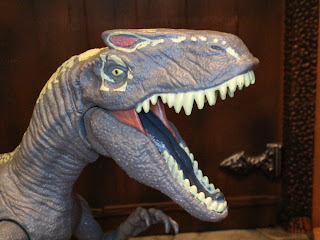 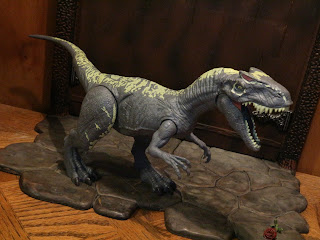 I really like this Allosaurus. An Allosaurus may not be one of the main dinosaurs that comes to mind when you think of your favorites (although more power to you if it is) but this figure does this Jurassic Period therodpod justice. I love the design, the colors, and the sound effects. This is an incredibly fun toy to play with and it seems that others agree at this line seems to be doing extraordinarily well. The Allosaurus is a Great dinosaur and well worth snatching, especially if you find one at Wal-Mart on their current rollback sale.

If you are looking for another Allosaurus, I actually reviewed one in the Mini Dino Multipack.