Something Has Survived!: Dimorphodon (Attack Pack) from Jurassic World by Mattel 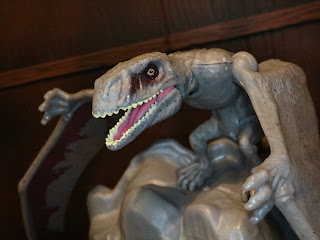 This guy is a nasty looking little creature, isn't he? I'm really digging the Jurassic World line from Mattel and the Dimorphodon was actually one of the first figures I picked up from it. This little pterosaur is one of the craziest looking figures available in the Jurassic World line and absolutely captured my attention the first time I saw these toys in stores. Dimorphodon is one of the smaller "Attack Pack" figures but is perhaps the most well articulated. Let's check this little flying creature after the break... 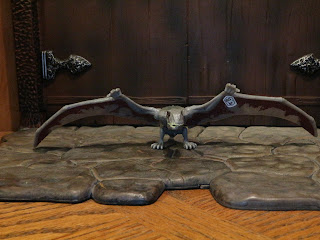 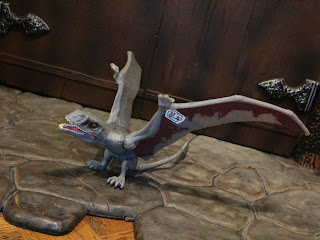 * As I mentioned in the intro, the Dimorphodon has quite a bit of articulation for a smaller figure. Swivel/hinge wings and a swivel/hinge neck make him rather fun to play with and pose in various menacing ways. 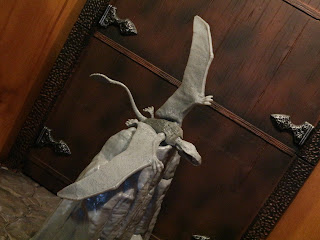 * One of the things I like about the Dimorphodon that seems like a huge improvement over the larger and a bit more expensive Pteranodon from the Jurassic World: Legacy line is that the Dimorphodon can both stand on it's legs and look forward and take a more natural looking flying pose. I wish the Pteranodon could have done that. 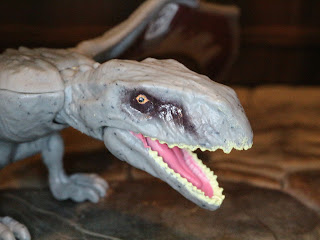 * The headsculpt is good. I like the eyes, the teeth, the opening jaw, and the overall appearance. The Dimorphodon definitely has the "Jurassic Park look" that make the dinosaurs from those films stand out. 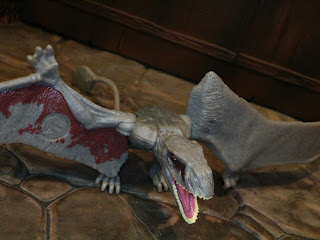 * I like the colors on this figure. The overall gray color looks good and there is a nice light black paint effect that adds some shading and texture to the top of the wings. Underneath the wings are some red splotches, giving the toy just a bit more color. 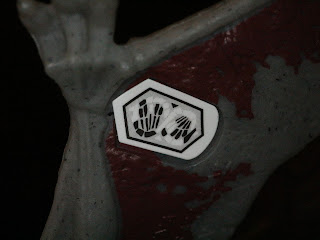 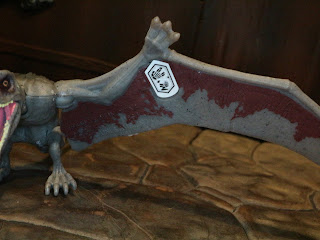 * While all of the Jurassic World figures I've reviewed thus far have featured this symbol on the bottom of a foot, the Dimorphodon's is on the bottom of its wing. It's a bit of an eyesore, really. 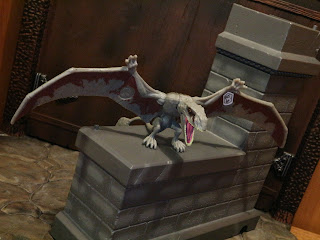 I really think the Dimorphodon is one of my favorite figures in the Jurassic World series. He's small but the articulation is fun and he just looks like a mean little bugger. These little guys were quite nasty in Jurassic World and I assume they will show up in Jurassic World: Fallen Kingdom, too. This is a Great figure for the price and pure hand candy. Mattel has impressed me with their offerings in this line and I don't think I'm the only one: I've seen my local stores restock their pegs at least three times with Jurassic World toys from Mattel! That's a rarity with a toyline these days.

This is the first Dimorphodon I've reviewed on the site. For more Jurassic World toys from Mattel, check out the following:
Dilophosaurus
Posted by Barbecue17 at 6/02/2018