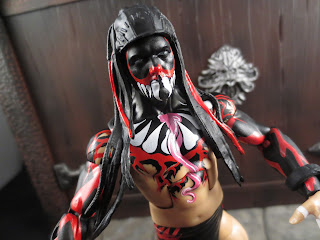 I'm a WWE fan and I think Mattel is releasing some incredible action figures in their Elite series but, let's be honest, often the figures are just different men and women in different trunks and boots. There just aren't as many "gimmick" wrestlers as there used to be. Enter Finn Balor, AKA the Demon. Finn is an Irish wrestler who is currently part of WWE's NXT. Balor is an incredibly talented wrestler and has some amazing entrances when he shows up wearing his demon themed body paint and entrance attire. Finn Balor here is a figure that might just grab your attention even if you don't have much appreciation for sports entertainment due to his incredible paintwork and unique appearance. Ready for a closer look at Finn Balor, part of Mattel's WWE Elite series 41? Then join me after the break... 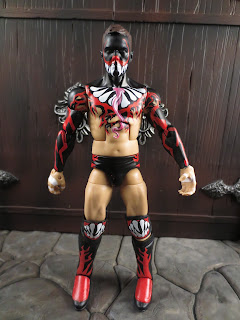 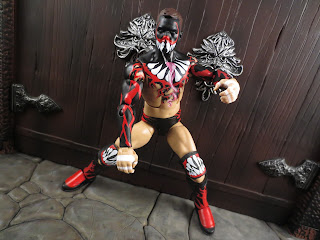 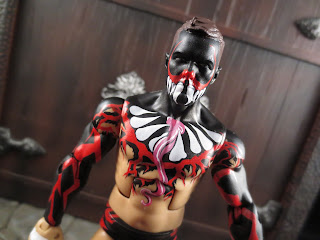 * Let me assure you that there is a very good Finn Balor sculpt here. Of course, it's tough to see because of all of the paint. That's not a negative, though, as the paintwork is awesome. It's seriously what sells this figure. Finn uses this Gaelic demon inspired body paint for some of his entrances and it looks insane! He has so much presence when he uses this style. I had heard of Finn Balor but first saw him do the demon entrance when watching the Beast in the East event last Summer and I was amazed. 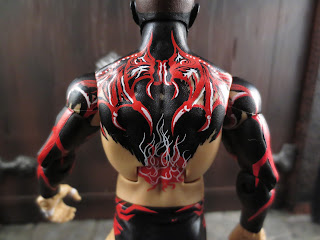 * Turn Finn Balor around and you can see that the paint is just as detailed as on the front. There's what looks like flames and some dragon inspired wings. Mattel went all out on this dude and it shows. 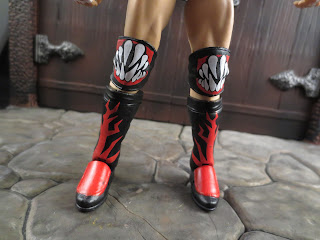 * And check out these cool boots and knee pads. How wicked, right? Not only are Finn's boots fiery looking but his knee pads have some awesome demon teeth painted on them. This figure seriously has some nice paintwork, particularly for a figure in this scale and sold at mass retail. 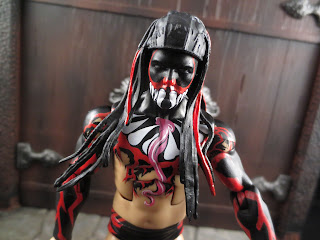 * Finn usually keeps his hair pretty short so this demon headpiece really changes the look of the figure and gives him a really unique appearance. It fits nicely on his head and looks incredible. What a crazy looking figure, huh? It's cool to see such a dynamic looking figure in this line. 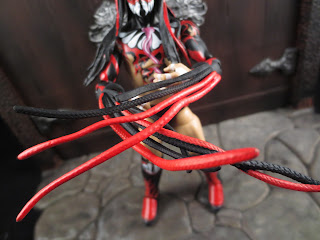 * Finn also comes with two sets of tendrils that clip over his wrists. These are really cool as they're definitely kind of similar to some of the strips of fabric and such he wears during his demon entrances. The various strands are either red or black and they just look wicked cool.

*To be honest, I really don't have any. This is one of my favorite WWE figures in quite some time. 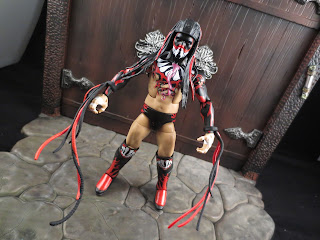 While Finn Balor just lost the NXT Championship to Samoa Joe, he is currently the longest reigning NXT Champion with 292 days (Adrian Neville is second with 287 and Bo Dallas is third with 280. Yes. Bo Dallas). Who knows what plans WWE has for him next but it's a sure bet that it's just a matter of time until he hits the main roster. He's a stellar talent and if they time his arrival right, he could make a heck of an impact. Oh, and this figure? It's just as Epic as Finn Balor. Seriously, this one is worth picking up even if you don't like wrestling. He's just a cool looking toy in general!

I haven't reviewed any other Finn Balor figures, but I have reviewed plenty of other WWE figures from Mattel, including: