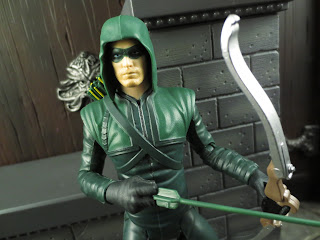 If you listen to any of the podcasts I'm on with ThEpic Review then you can tell I'm also not a great TV watcher. I really just have a hard time committing to a TV series, even if it's on Netflix or Hulu. While I've only watched a few episodes of Arrow my wife has actually kept up with it. And Flash. And Legends of Tomorrow. Honestly, I'm more familiar with Stephen Amell from his WWE appearances during his feud with Stardust last summer. I really wasn't even planning on picking this figure up but I decided that I really wanted to build the Justice Buster "Collect & Connect" figure so I picked up the Arrow a week or two ago when I was at my local Wal-Mart and found the rest of the second wave of series 1 as well as this figure. During the DC Universe Classics days Mattel kept those comic based figures and their Movie Masters figures in two distinct scale and two separate lines. While Mattel seems to still have distinct scales, they have put them together in the same line, and interesting choice to be sure. Want to take a closer look at this figure from the first series of Mattel's DC Comics Multiverse line? Then join me after the break... 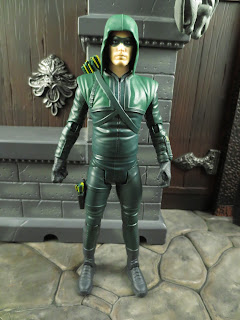 Accessories: Bow, arrow, and the right arm of the Justice Buster. 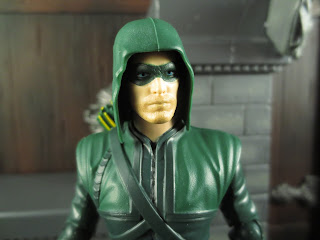 * This figure seems to walk the line between the more comic based style of Mattel's standard comic inspired figures and DC Collectible's more realistic Arrow line. DC Collectibles is producing much better looking figures but, for a mass retail line, this isn't a bad version of the Arrow. I like the way the hood drapes over the head and the face looks pretty good. You can definitely see Stephen Amell's likeness here. 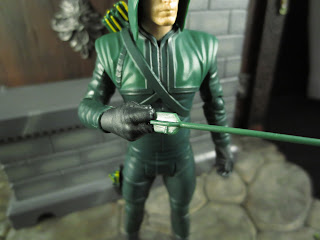 * One thing that is kind of cool is that Ollie's right hand is permanently sculpted into an arrow holding position. There's a small hole on the hand which the back of the arrow can be plugged into. This isn't a bad idea as it does make the figure look a bit more interesting when posed on display. 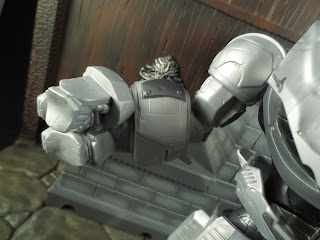 * With the swap back to 6 inch figures, Mattel is also jumping back in and offering Collect & Connect figures. This series of 6 figures comes with the pieces to assemble Batman's Justice Buster. This looks like a cool figure and Arrow comes with the right arm, which features a swivel/hinge elbow and a swivel/hinged shoulder. The arm is a little over 5 inches, so this thing should be nicely sized. Here's a little spoiler! I just recently obtained all of the parts for this, so I should be reviewing it in the next couple of weeks! 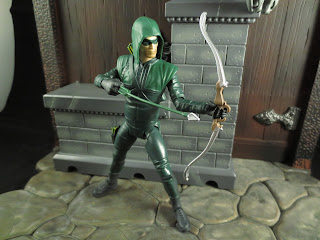 * I still like the articulation on Mattel's basic DC figures (they've even been improving it on some figures) but I'm really disappointed that Mattel has stuck with the limited articulation from the Movie Masters line. There are just too many joints on here that feel overly stiff with a limited range of motion. Very disappointing, especially considering that Mattel does such a great job on the articulation for their WWE figures. 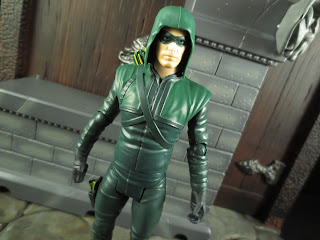 * Arrow isn't a terrible looking figure but I can't help but feeling that the overall sculpt on the body is just a little bit soft. The costume seems fairly accurate from what I can tell from various stills but the mixture of too many dark greens and an under-detailed sculpt with little interestng texturing just makes this guy feel a bit flat. I really like the Arrow's television outfit but Mattel made it seem a but too dull. 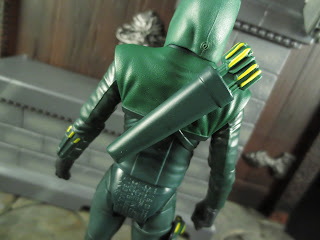 * Ollie has spare arrows of different sizes on his left wrist, right hip, and in the quiver on his back. Unfortunately, they totally look underwhelming. There's something about the way they're sculpted (again, SAWFT) that really makes them look like they're congealed together. If this were a TMNT figure or something in a smaller scale this would be fine, but for a realistic character in a collector targeted line? This just doesn't cut it. 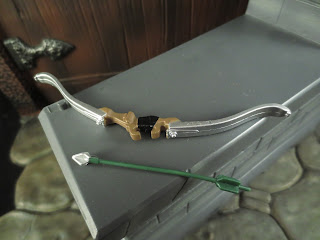 * Again, considering that this is a $20 line aimed at collectors, this is a pretty weak replica of Ollie's bow. It just looks a bit too chunky and under detailed. Oh, and there's no string not is there even a place to put your own string. And that arrow? Too short and rather warped. 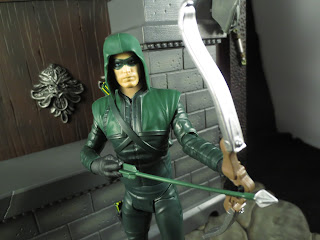 Mattel, you have failed the DC Universe!

I've been wanting to get back into Arrow as I really like Stephen Amell and Green Arrow. I was kind of excited about picking this figure up but ultimately it really disappointed me. I probably wouldn't have picked this up if it weren't for the build-a-figure piece (so if you want to buy this from me just let me know) as the figure just doesn't even look like it's part of the same line as the other DC Comics Multiverse figures. This guy is pretty Eh and a 1/2 in my opinion.

I haven't reviewed any other Green Arrow figures on the site although I have reviewed a number of other figures from Mattel's recent 6 inch DC Comics Multiverse line: