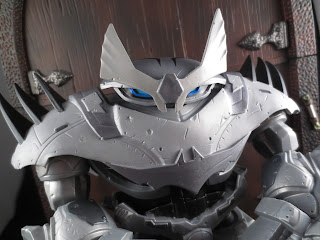 Looking back at Scott Snyder and Greg Capullo's incredible 50 issue run on Batman, I think we've seen one of the strongest, most consistent Batman runs ever. I mean, Batman has typically always been a pretty strong title but Snyder and Capullo really elevated things to the next level. Someday in the future, I feel like this will be the run that future films, video games, and other comics will pay homage to. Not only did Snyder and Capullo tell some great Batman stories but they also introduced some cool new hardware into Batman's arsenal. Today I'm looking at Mattel's interpretation of one of those new pieces of Bat-gear from their new DC Comics Multiverse series: The Justice Buster! Appearing in the "Endgame" storyline, the Justice Buster is a suit of armor which Batman uses to counter a "Joker-ized" Justice League. It's like the Hulk Buster, but more versatile. The Justice Buster is the "Collect & Connect" figure from the first standard Multiverse series and you'll need to purchase six figures to assemble it: The Arrow, Earth 23 Superman, the Flash, Reverse Flash, Endgame Joker, and Zero Year Batman. I picked up all of those figures except for the Flash (I just ordered his part online) simply because I really wanted a Justice Buster. Since DC is getting ready to start Rebirth, who knows if we'll see any toys from the New 52 for awhile other than stuff already announced? Also, I was jonesing to complete a build-a-figure again since the last one I completed was in 2013! Ready for a closer look at the Justice Buster? Then join me after the break... 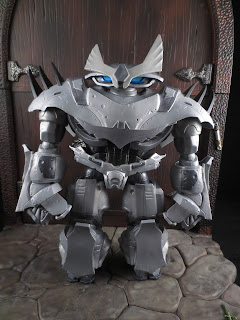 Non-Scalper Price: If you factor in the 6 figures you need to purchase to build this guy, you'll pay around $120 but end up with 6 other action figures. 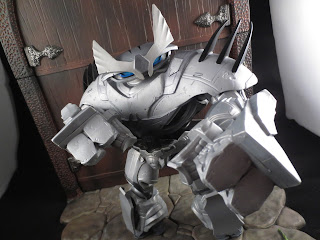 * Being a big beefy bruiser, being nimble isn't the first thing you'd expect from the Justice Buster. The upper body has a decent range of motion, though, which allows you to put it in some nice fighting poses. Don't expect anything hyper-articulated or anything, but it's certainly a wider range of articulation than I first believed. 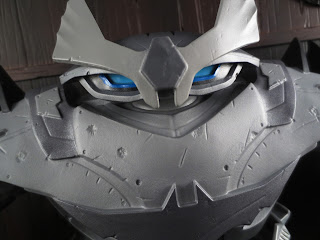 * I love the look of the head and eyes. Mattel did a nice job with the shape and design on the Justice Buster and I love how the eyes really stand out. They look like they're glowing in Capullo's artwork and I think Mattel's choice of two colors of blue nicely captures that. Also, this thing has a really nice true ball joint that really gives some character to the figure. 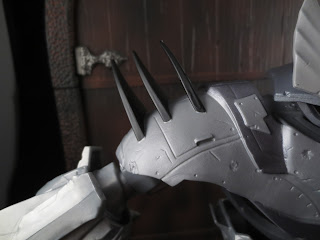 * I love the large spikes on the shoulders. They're made from a nice, flexible rubber that still manages to be hard enough to retain a nice shape and look imposing. They definitely add to the hulking, menacing presence of this guy for sure. 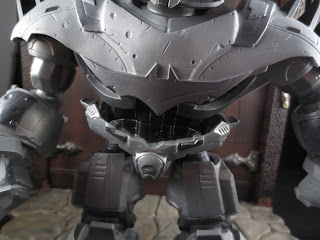 * There's a nice amount of detail on the sculpt of the Justice Buster. The entire body is covered with various nicks and dents, perhaps showing that Bruce has taken the Buster out on a number of practice runs. While it might not be a perfect match for the armor seen in the comic, it's incredibly close and absolutely cannot be mistaken for anything else. 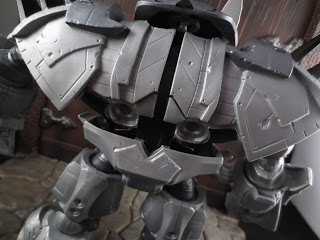 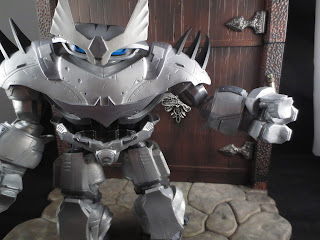 *My biggest complaint with this figure is that the paint job seems a little overly simplistic. A wash or something to bring out the various scrapes and dings in the armor would have been very welcome. 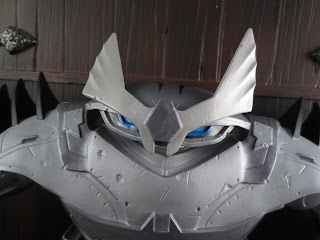 * I like the look of the crests on the Justice Buster's head, but I'm not a fan of them being molded in a softer, more rubbery plastic. If they get bent they'll take a bit to come back to shape. 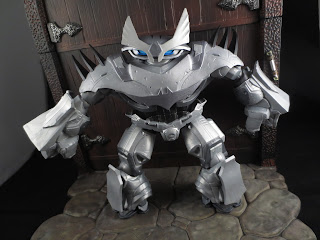 * The lower body is unfortunately really limited in articulation. There's nothing in the way of "ankle" articulation and it can be tough to get this thing to stand up on it's robotic feet. Heck, there's not even a waist swivel or anything. I can't think of many times when a build-a-figure has had less articulation than the standard figures in the line, but the Justice Buster indeed does. 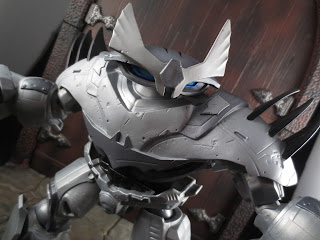 A good build-a-figure convinces the customer to pick up a few figures they weren't even planning on buying in. The Justice Buster totally worked on me because I wasn't planning on picking up any of the TV based figures but I really just had to build this brute. It's a fun build-a-figure although it definitely lacks the "Wow" factor that most other Build-a-figures tend to have. It's just not as impressive as I would have liked due to the more simplistic paint job and limited articulation but, in the end, it's a new Batman armor from a really good storyline in Snyder and Capullo's Batman, so that counts for something. This is a Good and a 1/2 figure and while he might not be worth you picking up every figure you don't want in the line, he's definitely worth scrounging up some extra parts for if you're already buying a few figures from the line and have some parts scattered around.

I've reviewed 5 of the 6 figures in this series you'll need to purchase to complete the Justice Buster:
The Arrow
Batman from Zero Year
Earth 23 Superman
The Joker from Batman: Endgame
Reverse Flash (The Flash TV Series)