The Revenge of 31 Days of Toy Terror: Beetlejuice from Cult Classics by NECA 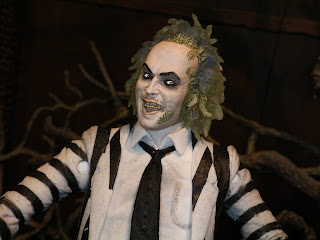 Although I haven't seen Beetlejuice 167 times the film absolutely keeps getting funnier every single time I see it! Beetlejuice is one of the best horror comedies ever made and easily one of my favorite Tim Burton films. Today the ghost with the most is getting his chance to shine as I'm checking out NECA's rendition of Beetlejuice in his iconic black and white suit from their 2008 Cult Classic series. Since this year's theme is The Revenge of 31 Days of Toy Terror, I wanted to review at least one older NECA release due to how many times they've been on the countdown in years past. While McFarlane Toys may have really originated the idea of modern horror action figures, NECA is the company that built upon McFarlane's work and elevated it to the level where it is today. NECA's Cult Classics was their effort to create a "catch all" horror brand under which to release various characters. Beetlejuice was part of the seventh series of figures but he wasn't the first Beetlejuice figure NECA released; NECA released a Beetlejuice line of five figures back in 2001 that I've never owned but, from all accounts, was pretty disappointing. This 2008 release was NECA's attempt to revisit Beetlejuice and release the most popular look for everyone's favorite freelance bio-exorcist. How'd they do? Let's find out after the break... 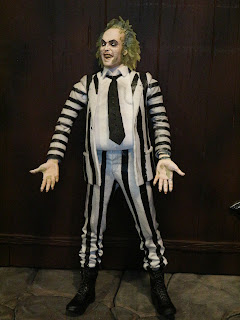 Accessories: 2 snakes and a book. 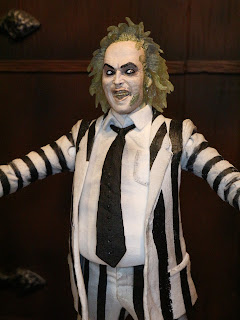 
* The first thing NECA did right with this release was release Beetlejuice in his classic black and white suit. While Beetlejuice doesn't always wear this outfit in the film, this is the look everyone associates with him due to its prevalence in the film's marketing, Halloween costumes, and the usage of this for the character's look in the animated Beetlejuice cartoon series. There's no doubt who this is on your shelf and due to the white (a color you don't see often on horror toys) Beetlejuice really stands out on the shelf. 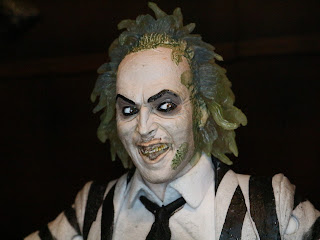 * Secondly, NECA nailed the headsculpt. This is an excellent, lifelike representation of Michael Keaton as Beetlejuice. I love the eyes, the teeth, the slime/ mold on the face, and the expression. It's a great figure that definitely manages to capture both the horror and the humor of the character. 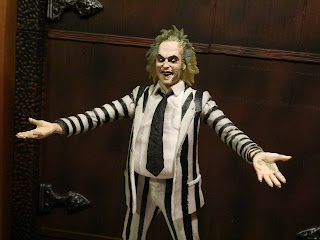 * During this period NECA was still releasing action figures with very limited articulation, which was pretty standard for "collector's figures" during the 2000s (it wasn't until their Rocky series that NECA began to really up the articulation and durability of their human figures to where it is today). That being said, Beetlejuice's balljointed wrists, swivel/hinge shoulders, and balljointed head work well and allow for some expressive posing. He moved quite a bit more than most other figures of this sort at the time. 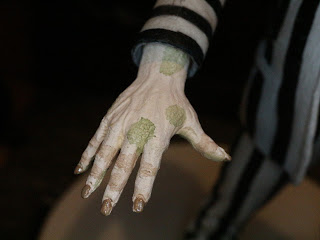 * The work on Beetlejuice's hands is incredible. I love the paint detail here. Most of the work on the hands and the headsculpt holds up just as well today as it did ten years ago. 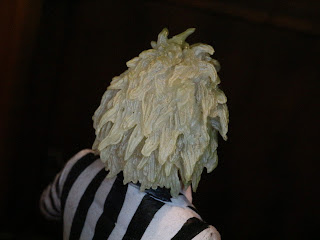 * The hair is exceptionally well done. It's molded in a translucent plastic with paint applications to give it a lifelike appearance (or should that be deathlike?). 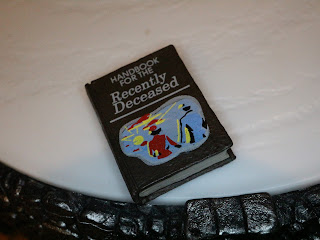 * Beetlejuice comes with a couple of accessories. First up is the Handbook for the Recently Deceased. This is a fun extra with nice printing on the cover and the spine. It's a fun, recognizable accessory from the film and makes for a nice item to display near the figure. 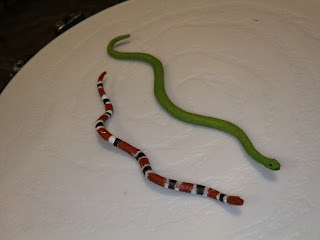 * Beetlejuice also comes with two snakes. One is a standard green snake while the other looks like a milksnake (there is no yellow, so it's not a coral snake nor a kingsnake). These are nice sculpts and make for an interesting accessory we don't see often included with action figures. 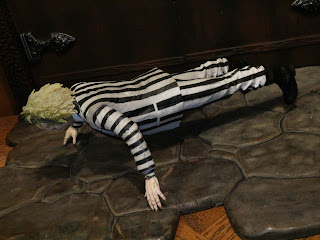 * Beetlejuice has a tough time standing up. Maybe it's because of the way his boots are sculpted but I constantly have to fight to keep him standing up. I wish NECA had included a stand with him like they did for so many other Cult Classics releases in the line. 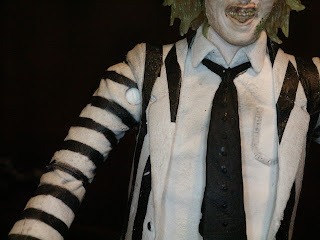 * The shoulders look really strange. I can see what NECA was going for but the swivel/hinge shoulders seem to just out from the body in a way that shoulders just don't do. It's a but unsightly unless you have Beetlejuice posed with his arms out to the side. 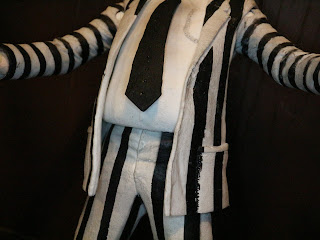 * Beetlejuice's jacket features some very unsightly paint lines. I'm OK with some of the scuffs and such as it makes the jacket look worn and dirty but the poorly painted lines are simple the result of some bad paintwork here. 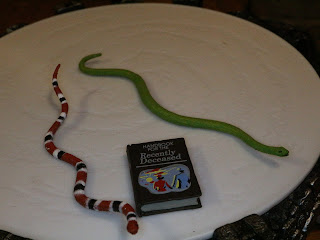 * Beetlejuice comes with three accessories but there is no real way for him to interact with them except for just placing them on the ground around him or unconvincingly placing them on his outstretched palms. 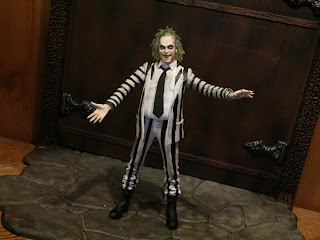 Beetlejuice was a very welcome release at the time but he turned out to be a bit of a disappointment. Overall I'd give him a Good, which is my average rating. Sadly, while he has some excellently sculpted and painted elements, there is a lot of weakness here, too. This was definitely a figure from right before NECA's transition period and it begins to hint at where they were going. I'd love to see NECA revisit Beetlejuice as an Ultimate Edition with some alternate headsculpts, hands, and a new articulation model. I think he'd sell quite well and really improve on this 2008 release.

This is the first action figure of Beetlejuice I've reviewed on here! For more figures from NECA's Cult Classic line, check out the following:
S-Mart Ash