I know it's tough to get away from the excitement of SDCC 2017 (even those of us who aren't there are glued to our monitors awaiting new reveals) but I have a shelf filled with these little DC Nano Metalfigs from Jada Toys and I want to talk about them! Today I'm looking at Harley Quinn, a character who I'd argue is without a doubt now in DC's top ten most popular characters, and probably pushing the top five. Harley continues to grow in popularity so it makes perfect sense that Jada Toys would include her not once but twice in this new line. While the Suicide Squad version doesn't seem to be out yet (these are currently exclusive to Wal-Mart through the end of July, I believe, so we might be seeing a more limited early assortment) the classic comic version is available. Let's take a closer look at this die-cast metal Harley after the break, shall we puddins? 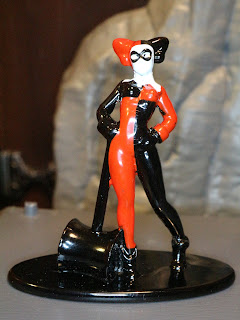 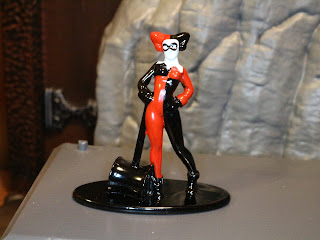 * Harley Quinn is definitely on the weaker end of the offerings in this line. The coloring choices definitely give off the appearance of a vinyl outfit, which isn't a bad choice, and the overall paintwork is neat, but there are definitely some noticeable places where either the paint clumps together and looks messy or the sculpt is less than clean. There's some noticeable problems between Harley's right thigh and the mallet handle and between her legs. Maybe it's more difficult to get a clean die-cast molded figure on a figure who is much thinner. 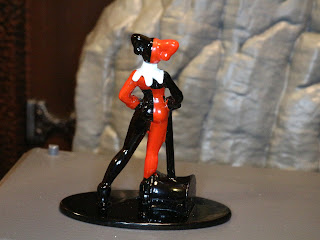 * Another problem I have with this figure (which is hard to see in photos) is that Harley seems to be leaning backwards. It's not terribly noticeable when looking at her straight on, but turn her sideways and you'll notice that something is off. I like that the mallet was included as part of the sculpt, but why not have her leaning against it rather than leaning backwards? 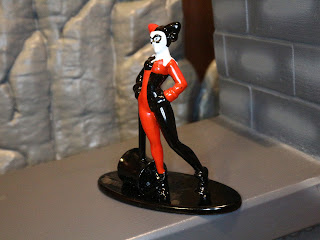 Harley isn't atrocious, but she's definitely one of the weaker figures in this line due mostly to the odd, leaning backwards pose. If she weren't a figure with a die-cast metal base, I have a feeling she might constantly tip backwards. As it is, she still looks pretty cool, although she's not as crisp and impressive as other releases. She's definitely an Eh and a 1/2 minifigure. My guess is she'll be popular still just because this is Harley Quinn and she's $1, but don't judge the rest of the line by this figure if she's the only one you pick up.