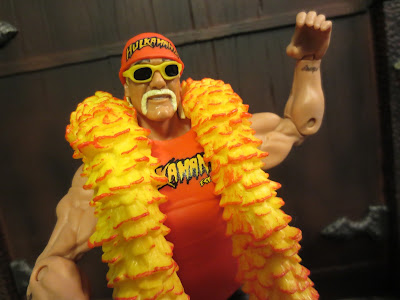 I was on a shopping trip with the family. I hadn't bought anything in a few days. I was bored. I saw this Hulk Hogan figure sitting on the shelf and I decided to buy it. Don't get me wrong, there's nothing at all wrong with Hulk Hogan: The guy's an icon in sports entertainment and pop culture in general. Still, this isn't a 1980's/ early 1990's Hulkamania Hulk Hogan. It's actually Hogan as he appeared on an episode of WWE Raw last year (which, interestingly, is not the outfit he's wearing on the package). He comes with some unique accessories which made him rather interesting to me. I shouldn't need to defend my decision to buy an action figure of a 60 year old Hulk Hogan but I do. Anyways, let's Hulk-up and do this! More details after the break, brother! 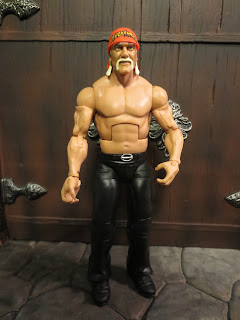 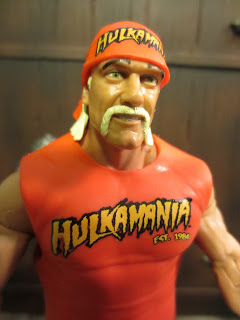 *This is an excellent Hulk Hogan headsculpt. Seriously, it looks just like him. Even if he weren't wearing the Hulkamania bandana you'd still no exactly who this is. He's got a great facial expression, too, as it perfectly captures Hulk playing up to the audience. Mattel did a really fine job here. 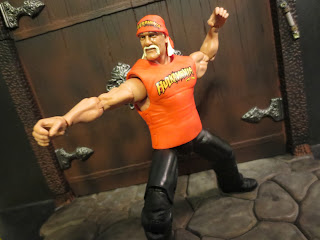 *Just like most of the other WWE Elite figures, Hulk Hogan is sturdy and well articulated. Worry about the 24 inch pythons and Hulkamania destroying you and not the other way around: This figure is solidly built! Seriously, there's no way you're breaking this figure. He's solid brother. 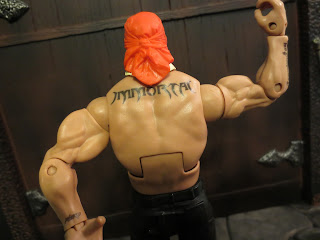 *As far as I can tell Mattel nailed all of the Hulk Hogan's tattoos. Well, at least those that are visible when he's shirtless. He's got "Immortal" across his back, "I am that I am" on his right forearm (God's response to Moses from the book of Exodus), and the words "Awareness" and "Grateful" on his right and left wrists respectively. These are all very neatly applied and add a lot to the figure. 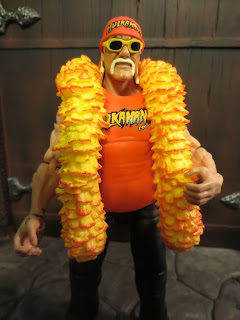 *I love that Hogan comes with the flamboyant extras for his outfit from the February 24, 2014 episode of WWE Raw. The red "Hulkamania, Est. 1984" shirt is removable as is his feathery boa and his sunglasses. The paint work on these pieces looks fantastic! Just be careful with those sunglasses, as they might be fragile and can easily get lost. 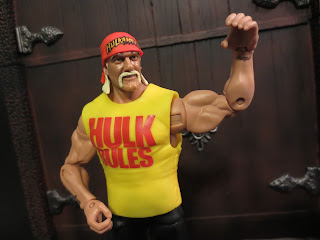 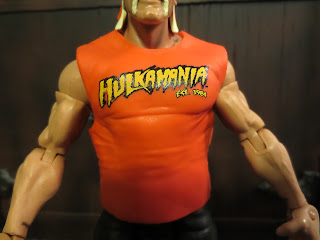 *From what I've heard, negativity and Hulkamania are two things that don't go together, so I'm going to try and not get hung up on these things. Still, I wish it was a bit easier to swap Hulk's shirts. Rather than have a removable ball jointed head to facilitate easy swapping you actually have to stretch them a bit. I'm afraid that over time this could lead to some problems so I'd say pick your favorite and stick with it. 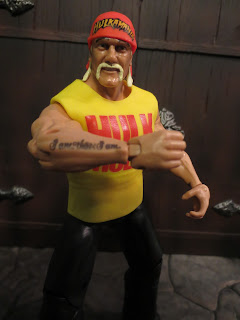 *Hulk's wearing the same pants as both versions of Luke Harper. That's not a huge deal but what is a little odd is that where Luke Harper has a pocket handkerchief hanging out of his back pocket, Hulk just has a hole. Little stuff like that sometimes bothers me as it just seems lazy. Maybe they could have given him something else to store back there? 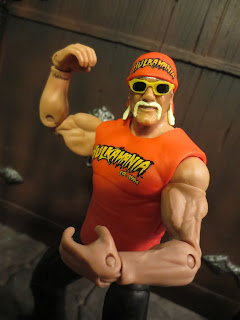 This is a really good Hulk Hogan figure. Actually, I think this is the first Hulk Hogan figure I've ever owned! Pretty wild right? Already I can feel the Hulkamania running wild through my house, brother. Seriously, Mattel did an excellent job with this figure. It's pretty accurate to Hogan's appearance on Raw last year and it's a darn fine toy in and of itself. I'm feeling pretty justified in giving this guy a Great and a 1/2 rating. If every WWE Elite figure were as customizable or well accessorized as Hulk Hogan here Mattel would have an unstoppable juggernaut on it's hands. If you're in to well articulated muscle men, WWE, or 24 inch pythons, you need to pick this figure up. It delivers, brother.

I've now reviewed far more WWE Elite figures than I thought I'd ever own: