Action Figure Review: Blast Attak from Masters of the Universe Classics by Mattel 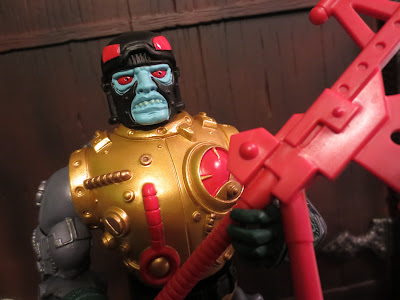 It's been three months since a vintage Masters of the Universe figure was released in the line (February 2015's Ninja Warrior/ Ninjor), which is actually kind of cool if you think about it: It shows just how expansive and deep MOTUC is willing to go in terms of character selection! This month we've got another vintage MOTU figure: Blast Attak was originally released in 1987 as part of the 6th series of MOTU figures. I distinctly remember having the vintage figure (although I sold him at some point but kept the ax) and his gimmick was rather interesting in that he could blow up. Yup, Blast Attak was an evil robot that went around exploding himself to attack the Heroic Warriors. Odd, huh? Interestingly, Mattel didn't even attempt to do anything with this figure replicate the vintage action feature (but I'll get to that in a bit). One of the interesting things about Blast Attak is that no one ever seems to be certain of which faction he belongs to: He has been portrayed as an Evil Warrior on his original packaging and in the Marvel comics but as one of the Snake Men in the minicomic "Revenge of the Snake Men." In regards to appearance he looks more like a member of the Evil Horde, so there's that element thrown in, too. Anyways, MOTUC labels him as a member of the Snake Men even though he is neither a snake nor a man (he was apparently built by King Hsss or something) but you can add him into your collection wherever you'd like. Want to put him in with the Great Rebellion? Sure, go ahead. Here's the full scoop on Blast Attak, after the break of course... 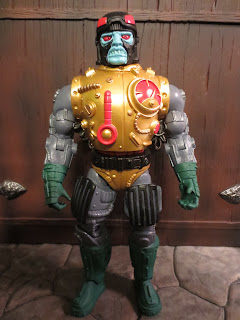 Accessories: Axe and a fuse whip. 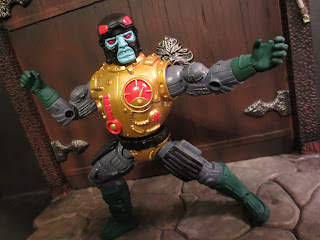 * Like most of the MOTUC figures in the past few years Blast Attak is sturdy and well articulated. Even though his "armor" permanently covers his torso there's still enough give to allow the mid-torso hinge a bit of movement. Seriously, all of his joints are nice and tight and he's a fairly fun figure to play around with. 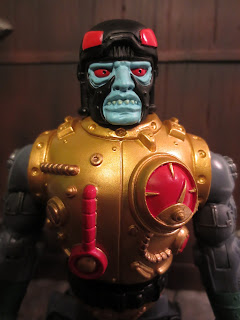 *The sculpt is a mixture of new and reused parts but everything goes well together. In fact, Blast Attak has an excellent resemblance to the vintage figure. The arms and legs are covered with interesting details and textures that show off Blast Attak's intricate robotic body. The head sculpt is good, too. Blast Attak looks a little doofy but, considering his job is basically to blow himself up over and over, I suppose he'd have to. 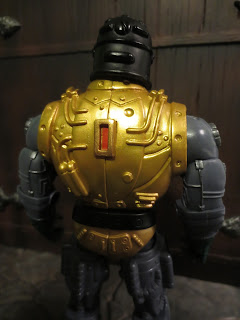 *The torso overlay is excellent. Around 2012 and 2013 Mattel started having problems with the armor that character's wore making them look overly bulky and not letting their arms lay right. This armor not only looks good but it functions excellently. It's permanently attached (underneath you can tell Blast Attak has the same torso as the Horde Troopers) but it really adds some character to the figure and is excellently executed. 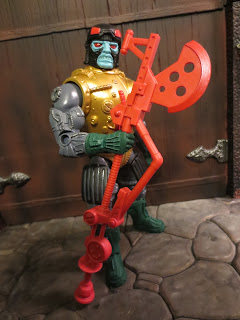 *I love Blast Attak's crazy axe weapon. I've always thought that it seemed like a combination axe and laser rifle, but Phantom Troublemaker from Needless Things (who hates this figure, by the way) points out that it also seems to resemble a pogo stick. When it comes to MOTU I'm all about weird stuff like this. I mean, why wouldn't Blast Attak use a weapon like this? 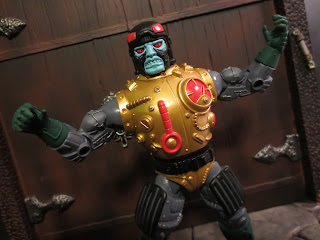 *My biggest problem with this figure is that Mattel didn't seem to make any attempt to pay homage to Blast Attak's action feature. While MOTUC hasn't really had many true action features, plenty of figures have used alternate and interchangeable parts to mimic the vintage action features such as the battle armor variants, Mekaneck's neck, Extendar's extra limb extensions, and Mantenna's additional eyeballs. Blast Attak, though, got nothing. I would have been OK with removable arms that could be swapped out with "flame bursts." 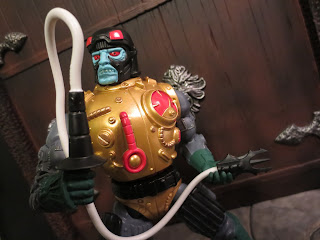 *I like the idea and the thought process behind Blast Attak's whip but the execution leaves a bit to be desired. The whip pays homage to the detonation fuse the vintage Blast Attak came with which plugged into Blast Attak's back and, when pressed, caused him to split in half. It's a cool looking accessory but I wish that it could connect to the slot on his back. 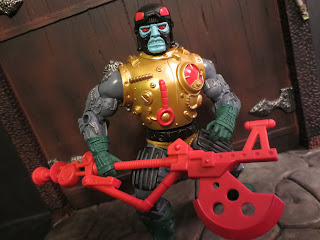 I'm pretty biased as I really do love MOTUC but I think Blast Attak is a pretty great figure. He's not the most interesting character or figure but he's well done. My complaints are more focused on things Mattel didn't do rather than being related to actual flaws of the figure. I'm honestly pretty satisfied with this guy and find that I like him much more than I thought I would. He's well executed, well accessorized, and ...just bizarre. Still, getting Blast Attak means we're one figure closer to completing the 1987 series of figures along with the Evil Warriors and/ or Snake Men factions. That's always a cause for celebration, no? I'm giving this guy a Good and a 1/2. He's not the most exciting figure but there's nothing really wrong here.