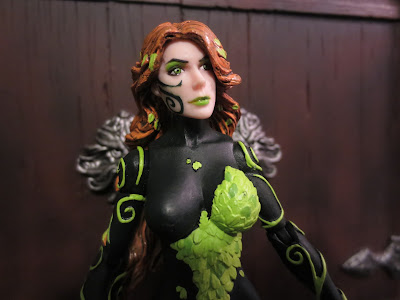 It's taken a few years but we've finally gotten a New 52 inspired Poison Ivy from DC Collectibles. Poison Ivy's costumes have typically always revolved around variations of green material and purposefully placed leaves but her look in the New 52, while utilizing both of the aforementioned materials, is actually quite different. In the New 52 Poison Ivy/ Pamela Isley actually started as a member of the Birds of Prey before turning on her teammates and running off with Clayface to cause trouble for the Penguin. That's about all that I can remember of what she has done so far in the New 52, so her role hasn't been huge. Still, since she's a Batman villain and a character who sells DC Collectibles decided to include her in their New 52: Super-Villains subset. While DC Collectibles has been steadily improving their product over the past couple of years, however, Poison Ivy feels like a rather dated figure. She's gorgeous, don't get me wrong, but her articulation seems like an afterthought. Read more of my gripes after the break... 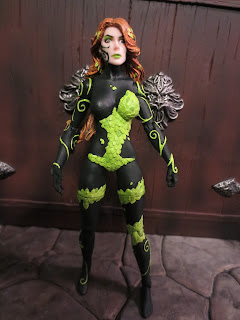 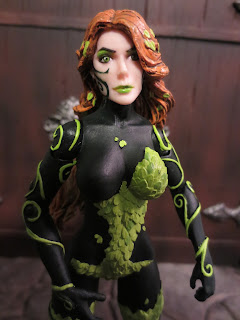 *Poison Ivy is a much simpler character design than many other characters in the New 52 DC universe but that doesn't mean that this figure was phoned in. That's definitely one thing I have to say about DC Collectibles: There sculpts are always accurate, detailed, and gorgeous. Karen Palinko is given the sculpting credit here and she's truly created a beautiful depiction of Ivy that's truly excellent. The individual details of the leaves against the bodysuit, Ivy's long, flowing hair, and the vines curling around her arms and legs really convey Ivy's identity as a force of nature. There's something wild and untamed here that definitely conveys Ivy's personality. Just beautiful! 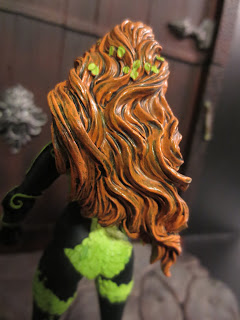 * The paint work is gorgeous. It's tough to tell but the bodysuit Poison Ivy is wearing is a very, very deep green and it makes an exceptional canvas for the bright green leaves of spread across Ivy's outfit. The paintwork is quite neat and clean overall, particularly on the face. Ivy's eyes are beautiful and her bright green lips really stand out. The hair is also excellent, particularly due to a deep wash that brings some depth to the sculpt. 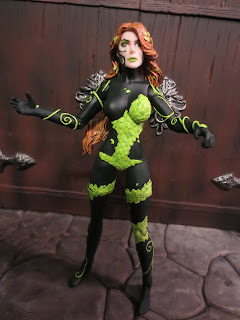 * Ivy's articulation is not only underwhelming in terms of joints that are missing (not even a wrist swivel ?) but the joints that are present are limited. Her hips are extremely limited as are her shoulders. It's tough even finding an interesting pose for the figure other than just standing around. I'm OK with DC Collectible's selective articulation policy most of the time (Gordon doesn't need as much articulation as Batman, etc.) but I find Ivy's articulation not just lacking but nearly useless. 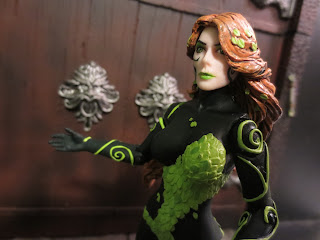 * I've been reviewing a few DC Collectibles lately, including yesterday's Harley Quinn from this same series which includes removable roller skates, a pistol, and a giant mallet. What does Poison Ivy come with? Nothing. Nothing at all. No stand, no vines, not even a plant. Surely something could have been included with this figure? I know action figure costs are rising but accessories still need to be utilized to add some perceived value to figures. Anything would have been better than nothing. 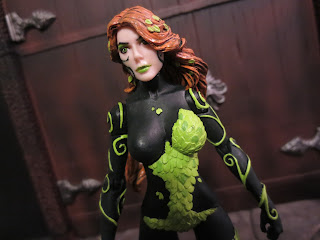 As you can guess, I'm really conflicted by this figure. She's beautiful and looks amazing, but DC Collectibles rarely fails to make visually appealing figures. It's the odd articulation that bothers me. If they had cut out the number of joints to preserve the flow of Ivy's svelte figure I think I would have been happier than having a decent amount of joints that are inhibited or feel useless. The lack of an accessory also kills a bit of my enthusiasm. Still, this is an incredible looking figure and I'm hard pressed to say that I've seen a better looking Poison Ivy sculpt in the past few years. I'm giving Ivy a Good and a 1/2: If you're a collector of Batman figures or a fan of the character I doubt you're going to want to skip this one. If you're more interested in something dynamic that you can pose and truly play with, however, you might want to shop around.

Strangely enough, this is the first Poison Ivy figure I've reviewed here. I've reviewed a few other figures from this specific line, though, including:
Deathstroke
Harley Quinn
The Joker