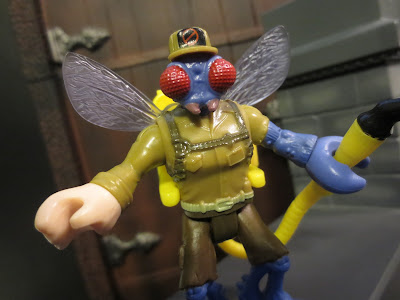 Imaginext has finally made a figure that neither Lego nor Playmobil have tackled yet: A human/fly hybrid exterminator. Seriously, the folks making Imaginext figures are absolutely insane and I love them for it! The Fly is another figure from Imaginext Collectible Series 5 and he's another solid hit. They just keep coming in this line, don't they? Surprisingly, the Imaginext Fly is not the first fly-themed action figure in my collection as I also own the vintage TMNT Baxter Stockman figure and the McFarlane Movie Maniacs Brundle Fly figure from the Jeff Goldblum classic The Fly. This guy is still pretty wicked, though, and is way better than the current TMNT series' Baxter Stockman as a fly action figure. Imaginext serves up another win and I'm going to tell you what all the....buzz is about after the break. Buzz. Get it? 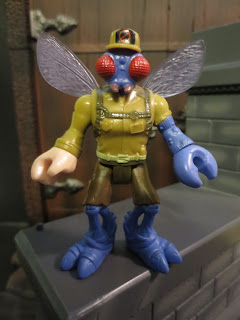 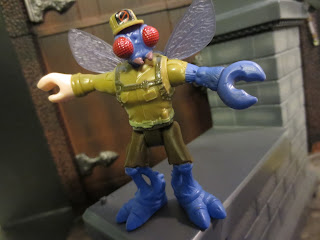 *If you're reading all of my Imaginext reviews, you're probably getting sick and tired of me talking about how fun these figures are, but guess what? These figures are fun! Really, really fun! They're extremely durable and truly remind me of many of the action figures of my youth. 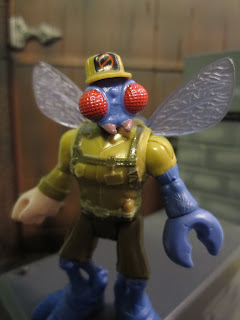 *The Fly is such a coo character design. Not only is he a half human/ half fly hybrid but he's decked out in an exterminator's outfit. The sculpting is really impressive as his fly-like body is covered in muscular fibers, his wings are translucent and textured, and his eyes have a great grid pattern to them. He also has plenty of cool elements that are part of his exterminator uniform such as a name tag, a can of bug spray, and cargo pockets. This guy is about half the size of Playmates' newest Bazter Stockman figure and he's twice as detailed with better paint apps. 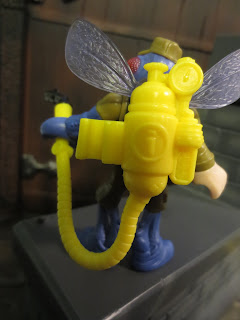 * The Fly comes with an incredibly cool accessory: A backpack insecticide sprayer! It's molded in a bright yellow plastic (that means it's hazardous!) and has a little gauge on it. It easily clips around the Fly's waist for spraying..flies? Humans? What exactly does this guy do, anyways? The nozzle is given a black paint application and it easily fits in the Fly's left... claw. The nozzle also attaches to the sprayer pack when not in use. How convenient?

*Not a thing! This guy is just too cool for school! 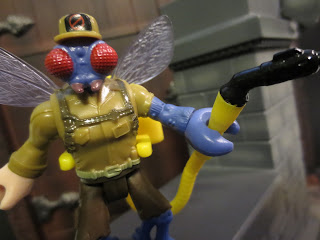 Look out Jeff Goldblum and Baxter Stockman! There's a new Fly in town! I really just cannot say enough how cool this figure is. Imaginext Collectible Series 5 is really just blowing it out of the water for me as I feel like the Fly is another Epic figure. Seriously, how could you skip this guy? It's amazing how great of a job Fisher-Price has been doing on this line! With so many cool and unique characters, a growing roster of DC Universe characters, and their new Mighty Morphin Power Rangers line, Imaginext's future seems brighter than ever! if you're someone who truly just loves wacky, fun toys, you've gotta check these out!

I've reviewed four other figures from this series so far: Cyclops, Chinese Warrior. Genie, and the Ghost.