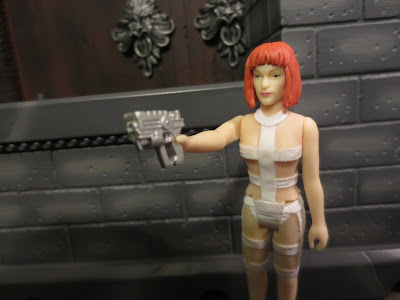 The Fifth Element came out in the spring of 1997 and I remember initially being unsure of how I felt about the movie. The bizarre, over the top, sometimes campy nature of the film was definitely a bit off putting to me at the time, but the alien designs, action scenes, and Milla Jovovich running around in an outfit made of bandages were all appealing. I can't speak for others but Milla Jovovich's performance as Leeloo definitely caught my attention as a teenager and I've been a fan ever since. I don't care how many Resident Evil movies Ms. Jovovich and Paul W.S. Anderson make: I'll watch them all. She's an awesome action star who is easy on the eyes and seems to truly just make movies that she enjoys; I can totally respect that. Did you know I only own one Hot Toys figure? I just had to snag the Alice figure that Hot Toys released for Resident Evil: Afterlife. Anyways, I'm not here to talk about Milla Jovovich; I'm here to talk about Leeloo in the straps costume that she wears during her escape after being reconstructed. Ready for a closer look? Then join me after the break... 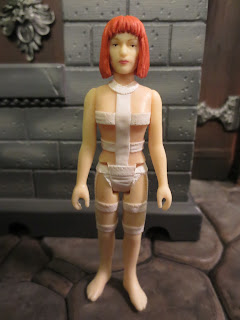 Accessories: Pistol and an element stone. 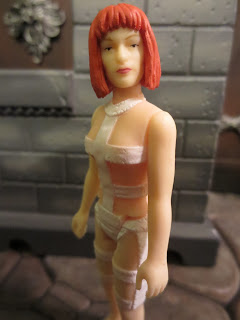 *The Fifth Element is another Funko ReAction line that shows some real improvement over last year's earlier lines like Firefly, The Goonies, and Terminator. The plastic quality is much improved and the sculpts are sharper and a bit more detailed.  The straps have a material-like texture to them and Leelo's hair is instantly recognizable. The paint work is nice as well as the lines separating Leeloo's skin (and there's a lot of skin here, folks) are neat and clean. 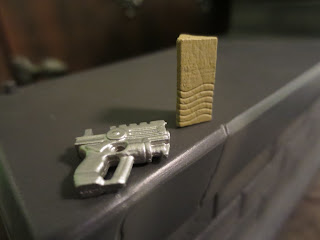 * Leeloo comes with two accessories: A pistol and one of the element stones. The element stone is exactly as the stone that comes with Diva Plavalaguna and might be the same as the stones that come with the regular Leeloo and Korbe Dallas, too. The pistol is an awesome sculpt. It has some really nice detail and is molded in a great silvery plastic. Leeloo's right hand seems specially molded to hols the pistol and she does so better than many retro inspired figures. 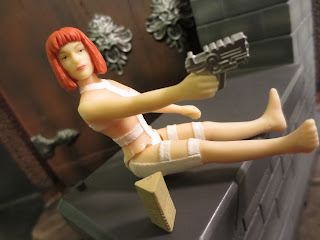 * It's interesting seeing a costume this revealing in the vintage Kenner style, but I think Funko pulled it off well. If there had been a Slave Leia in the vintage line Return of the Jedi then this is what it might have looked like. I mentioned above that Funko has improved the plastic quality of these figures over the past year and I'd put this line up against their other greatest successes such as Big Trouble in Little China and the Universal Monsters. Leeloo is very sturdy with excellent quality control work.

*The only negative I have is the packaging. I rarely talk about packaging, but with the Funko ReAction figures I feel like I have to as the figures look so stellar carded. Honestly, the way these figures look carded is part of their faux nostalgic charm. Unfortunately, The Fifth Element backer cards are kind of boring. I mean, they're not terrible but they're generic. There's neither a picture of the character on the backer card nor is their an iconic movie poster. It's one of the movie poster images with the characters removed. Maybe Funko needs to talk to license holders about having some cool new art commissioned for cases such as this where the likeness rights and such prevent using actor images. Still, how great would an image of Leeloo on the front of the card improve the overall presentation? 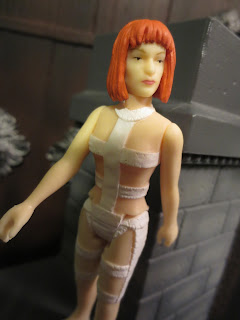 I know the whole faux vintage/ retro action figure trend is a bid divisive as some collectors love them while others think they're ruining modern toys and wasting licences. If you're in the latter camp I doubt anything I say will change your mind. If you're interested in these figures or like the style, though. I think Leeloo is a solid effort. She's definitely more "advanced" than most true vintage figures in this style but she still feels like she could have belonged to that era. The sculpt and paint are quite good (even if the likeness is average, though that's kind of the point) and the accessories are a welcome addition. I'm content with giving Leeloo a Great and a 1/2 as she definitely separates herself from many other figures in this style. I will say, though, that I hope these do well so that Funko might consider adding The Fifth Element in to their Legacy line of 6 inch figures. I'd love to have this cast as modern, highly articulated action figures. Since the film has become something of a cult classic, I imagine the fanbase is there and waiting.