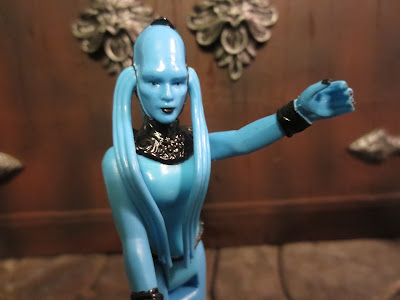 Who would have ever thought that we would be getting action figures from The Fifth Element almost twenty years after its release? Back in the late 90's the short lived company N2 Toys had plans (they showed prototypes in ToyFare magazine) for an action figure line based on the film that would have included Leeloo, Korben Dallas, Jean-Baptiste Emanuel Zorg, a Mangalore Warrior, and Diva Plavalaguna (there is also a picture of a prototype Mondoshawan floating around, too, but it might be from a separate company).  Unfortunately, despite having some excellent licenses N2 Toys just didn't last long and the line was never released. Cue Funko, who seems intent on making toys from pretty much every license ever made. In the years since the 1997 release The Fifth Element has become a cult favorite and must have seemed like a good property for the retro-inspired Funko ReAction line. Whether you're a fan of the film, have been bitten by the retro bug, or just want some extra figures to stand alongside your vintage Kenner Star Wars line, The Fifth Element seems like a license well-suited to this style. Today I'm looking at the first figure I picked up in this line: Diva Plavalaguna. Played by the beautiful Maiwenn Le Besco, Diva Plavalaguna is an alien performer who has been entrusted with the care of the four element stones that prove crucial to saving the universe. Ready for Diva Plavalaguna to take the stage? Then join me after the break... 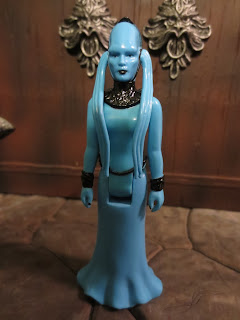 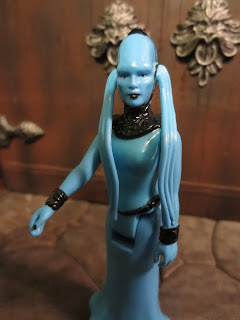 *The Fifth Element ReAction line seems to be another hit for Funko in terms of the quality of the figures and the sculpts. I would say the quality is up there with the Big Trouble in Little China and Universal Monsters figures. The plastic feels solid, the sculpts are sharp, and the likenesses manage to have character even though they're intentionally "off." These figures very strongly elicit the vintage Kenner vibe, probably due to their sci-fi fantasy sensibilities. 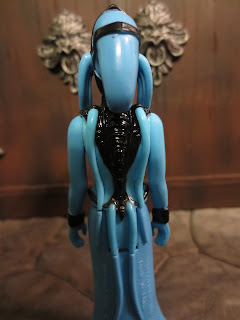 * Diva Plavalaguna looks fantastic. She's molded in blue plastic that really matches the film appearance of the character and given simple black highlights accent her features. She's a very curvy, organic figure and there's something incredible aesthetically pleasing about her. Most fans will automatically be reminded of a Twi'lek (I wonder if there was some inspiration there in the character's design) due to the flowing tentacles on her head and her back. 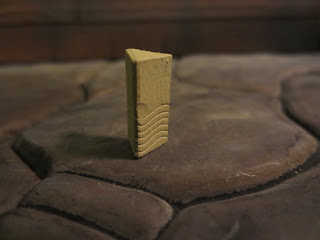 *Diva Plavalaguna comes with one of the four element stones. I'm not sure if there will be any differences in the element stones or if they're all the same (I have one other figure, Leeloo in her bandage outfit, and both stones look exactly the same. If you purchase both Leeloos, Korben Dallas, and Diva Plavalaguna, you'll have all four stones. 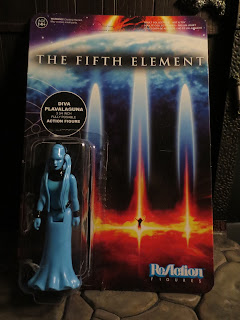 *I rarely talk about packaging, but with the Funko ReAction figures I feel like I have to as the figures look so stellar carded. Honestly, the way these figures look carded is part of their faux nostalgic charm. Unfortunately, The Fifth Element backer cards are kind of boring. I mean, they're not terrible but they're generic. There's neither a picture of the character on the backer card nor is their an iconic movie poster. It's one of the movie poster images with the characters removed. Maybe Funko needs to talk to license holders about having some cool new art commissioned for cases such as this. 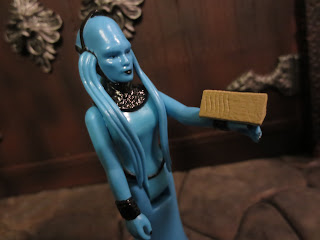 If you're into the ReAction vibe and like The Fifth Element, Diva Plavalaguna is definitely another hit from Funko. While she's not a major character in the film she is memorable and unique looking; stuff like that makes for a great toy! It's only been about a year since I picked up my first ReAction figure (the Rocketeer) and I really think they've made some excellent progress. Whether you love the film or want to just add a background alien to your vintage Kenner Star Wars collection, this is a very pleasant figure. Easily a Great rating on this one!

This is my first figure from The Fifth Element, but I have reviewed other ReAction figures, including: