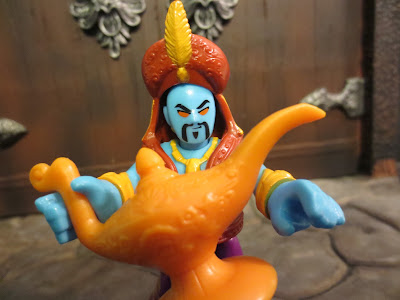 The Imaginext Genie is another figure that has been covered already (in some form, anyways) by both Playmobil and Lego. I'm not sure if these companies just pay attention to what each other does or if there are only so many general and archetypal characters to turn into minifigures. Regardless of the motives, this Genie is a pretty cool figure. Who would have thought that we'd be getting toys of characters from Islamic and Arabian mythology from Fisher-Price? Of course, this guy seems to be based on a mixture of popular culture depictions. My guess is that most folks will be reminded of the genie from Aladdin even though this guy looks pretty tough. If Danny Trejo were a genie, this is what I imagine he'd look like. Anyways, come into the Cave of Wonders and rub this magic lamp so we can see how this figure stacks up, after the break of course... 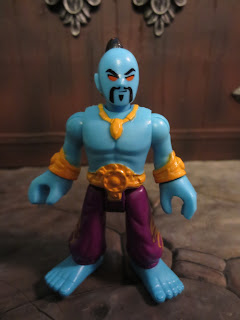 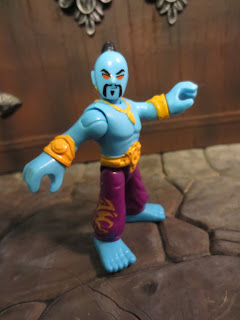 *I''m sure I sound like a broken record as I review eight of these figures in a row, but I just love the build and style of Imaginext. The enlarged hands and feet help them to stand better and give them a unique, cohesive look while the articulation strikes the right balance between keeping these fun to play with and durable for the younger set. And believe me, these little guys are meant to be played with!

*The color scheme on this figure is incredible! I love the bright blue chosen for the Genie as well as his golden jewelry and purple pants. He has some neat designs on the pants legs that feature some mysterious looking pattern. The face is great as the red eyes and half smile give him a mischievous look. Be careful what you wish for with this fellow. 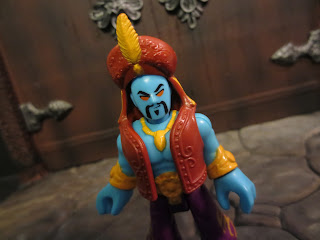 *The Genie comes with a combination vest and turban that easily fits over his torso and head. There's a fair amount of detail on the vest and turban and paint apps on the feather and the mantle hanging down behind the turban. This piece gives the Genie two very distinctive looks. 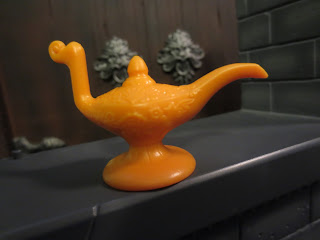 *The Genie also comes with a lamp. It has a handle so that it can be held and the surface of the lamp features some very ornate detailing. This is a cool little accessory that should be useful for a number of displays.

*Some of the yellow paintwork on the figure is a bi messy. The yellow paint apps on the turban are not as neat as I would have liked while the gold elements on the Genie's body have that messy look to them that sometimes comes when yellow paint is applied over a darker base color. 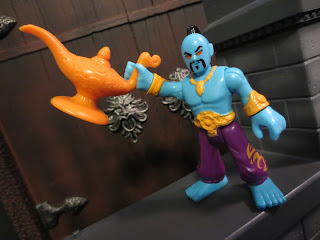 This series of Imaginext Collectible Figures has really been a win for me so far. I'm loving the character choices and the execution of the figures has also been incredible. The Genie is another fun addition. He looks great with my only problem being that the yellow paintwork is a bit messy. Overall, he's still probably in the upper half of Imaginext figures released and is definitely a Great mini. He's not Barbara Eden or anything, but he's still worth picking up.

I've reviewed three other figures from this series so far: Cyclops, Chinese Warrior. and the Ghost.